BuzzFeed makes the majority of its money on ads that pretend to be content, but can it keep up this charade? Or, is the Starbucks-sponsored “10 Summer Emojis That Should Definitely Exist” no charade at all, but actually the future of media that we should just smile and accept?

These are the questions that popped out to me from the news that Andreessen Horowitz invested $50 million in BuzzFeed at an $850 million valuation.

A16Z partner and new BuzzFeed board member Chris Dixon said he’s behind the company because “BuzzFeed has technology at its core. Its 100+ person tech team has created world-class systems for analytics, advertising, and content management.” In a phone interview, he tells me that people are already consuming so much via smartphones and tablets that there’s an opportunity for a content empire to rise with the new medium.

For a solid breakdown of the importance of the news, check out Felix’s Salmon’s interpretation. Essentially, BuzzFeed is probably worth a lot more than $850 million (I agree), now has the money to make acquisitions, and will use its editorial content to prove to advertisers that it can reach lucrative young demographics.

But the most interesting fact revealed with the news wasn’t that BuzzFeed has 550 employees, 150 million unique monthly visitors, or expects to make triple-digit millions in revenue in 2014. It’s the way it makes that money. 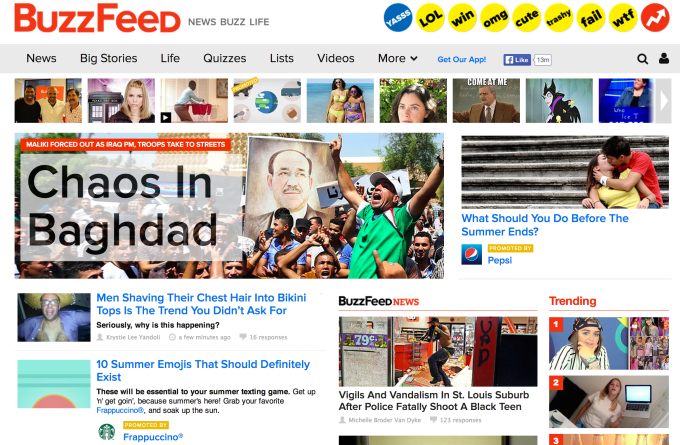 Once upon a time, mediums like television hosted both content (tv shows) and ads (commercials) that looked similar but were made by different companies. Now, BuzzFeed makes the channel, the content, and the ads. Mike Isaac of the New York Times writes:

“Already, most of BuzzFeed’s revenue is derived from BuzzFeed Creative, the company’s 75-person unit dedicated to creating for brands custom video and list-style advertising content that looks similar to its own editorial content.”

Here’s what that looks like. First, the BuzzFeed home page above.

Wow, no annoying banner ads. But that doesn’t mean this is all organic content: 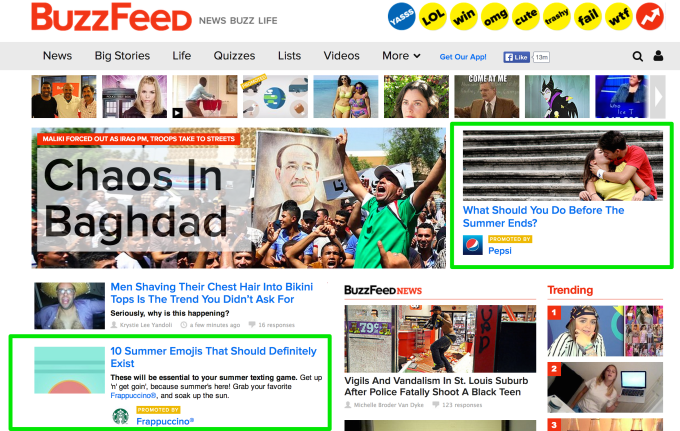 The BuzzFeed Creative team built these ad/articles for Pepsi and Starbucks with the same design, headline format, and imagery people are used to from BuzzFeed so they blend in. 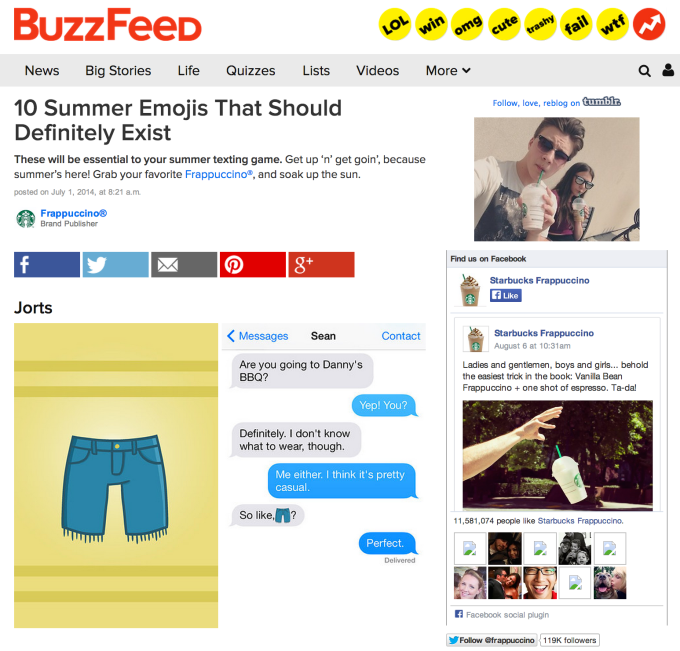 Starbucks gets to promote its Frappuccino product at the beginning and end of the post and gets a giant Facebook Page Like button and timeline on BuzzFeed. This format performs much better for advertisers than traditional ads, and Dixon pronounces “Banner ads do not work on the desktop and will not work on mobile.”

Apparently, BuzzFeed’s native ads are working, as it expects around $120 million in sales this year. People are in fact clicking these posts and reading them. Some are even sharing them. But are they good for BuzzFeed’s readers, and by extension, the company in the long run?

Thanks for the tip, Pepsi. This is what appears at the bottom of BuzzFeed’s Pepsi ad/post that flimsily masquerades as content.

At their core, I believe these ads are designed to deceive us. So does plenty of advertising, including some terrible pop-overs and poorly labeled banners inserted into the TechCrunch site (thanks AOL). BuzzFeed labels its native ads relatively clearly, so I’d certainly say it’s less deceptive than other sites, but that doesn’t make it innocent.

[Update: Let’s look at some examples of the deception. BuzzFeed’s “How To Get Great Buns” is an ad for Carls Jr burgers, not a list of workout tips. And while a “Promoted by Carls Jr” tag might appear on BuzzFeed’s home page river and the post, there’s no telling from a tweet or Facebook share that this is an ad and not organic content. Meanwhile, BuzzFeed features articles with the ambiguous “Publishing Partner” label which actually link away from BuzzFeed to completely different websites, which certainly surprised me. These aren’t ads but instead a traffic exchange where BuzzFeed and other sites cross-promote each other, but it’s very tough for most people to tell what’s going on.]

Whether or not people enjoy a piece of content, I think they should understand if it’s an ad, not just be warned. That doesn’t mean native advertising is so evil that we shouldn’t use it. Television commercials are native ads — they’re 30-second mini TV shows. Native ads have helped monetize otherwise free content mediums and could be critical to the future of journalism, even if they’re meant to fool people.

Dixon has a very different perspective. He tells me “I think there’s a lot of confusion about this. I just don’t think it’s true that they’re tricking people. It’s very clearly labeled. More clearly labeled than Facebook or Twitter. It’s right at the top.”

Ideally, content would be so good that we wouldn’t care if something was organic or an ad, yet right now I think a lot of people can’t tell the difference. And it could get worse if companies like BuzzFeed get more cavalier about camouflaging native ads, say, by minimizing or removing the warning labels. 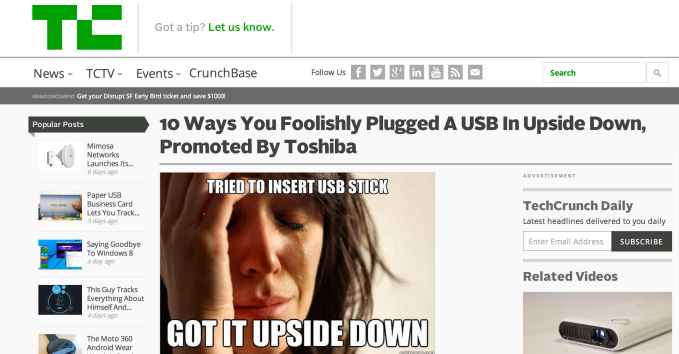 But this is not an indictment of native advertising. There are plenty of those already. People like comedian John Oliver (below) are happy to scream at you about why native ads are diluting journalism. Others like International Advertising Bureau President and CEO Randall Rothenberg will tell you everyone from The New York Times to Facebook does it and since its been around for decades we should just suck it up.

So the morality aside, what I want to know is whether native advertising will keep working for BuzzFeed and how?

Try as it may, many of BuzzFeed’s native ad posts are drivel, and I don’t think this quality level will scale. Starbucks wants you to check out ‘14 Items On The Ultimate American Summer Bucket List’ while Pepsi’s ‘A Thank-You Letter To Summer’ sincerely announces “Pepsi wants to help you remember your #realbigsummer.” Often, these are just a random smattering of animated GIFs with weak captions tying them to the headline theme. Sometimes, they’re facts from Wikipedia thinly veiled to make Arizonans buy car insurance, like Geico‘s “12 Reasons Why Phoenix Should Be Called The #NoFilter City”. Dixon thinks I’m too high brow, but this stuff is dreck compared to much of BuzzFeed’s organic content. I love me some BuzzFeed ridiculousness, but silly doesn’t have to mean shallow

BuzzFeed does create some great native advertising. This video for Tidy Cats kitty litter is hilarious and right on brand, as is a similarly narrated one for Friskies.

Still, they could be drowned out by crappy native ads that permanently sour people on BuzzFeed’s sponsored content.

Banner ads sure don’t work any more. The grim joke is that you’re more likely to survive a plane crash or complete Navy Seal training than click on one. The click-through rate on banner ads is said to be 0.1% and falling. It took some time, but we as Internet users have trained ourselves to avoid them like bubonic QR codes. This could happen to native advertising too if BuzzFeed isn’t careful. Old school ad agencies have proven that creating custom marketing content does scale, especially on the Internet, but our trust in clicking native ads won’t if we learn that they usually suck.

Quality At Any Cost

While it seems inevitable that our native advertising detectors will get better over time and we’ll evolve to avoid native ads, Dixon disagrees. He contends that Google’s search keyword ads and Facebook’s News Feed ads are both native advertising and they’re still working, but I see BuzzFeed’s as different.

Google keywords are responsive to your query and are utility focused. Facebook has consistently changed the design and format of its native ads, and which types are popular with advertisers has shifted too. The move from Sponsored Stories to Page Like ads to mobile app install ads may be offsetting fatigue and recognition of what stories are paid for. BuzzFeed could switch between formats like video, animated GIFs, photo listicles, and traditional articles, but as long as they’re under the BuzzFeed banner, they’ll be judged by their collective quality. 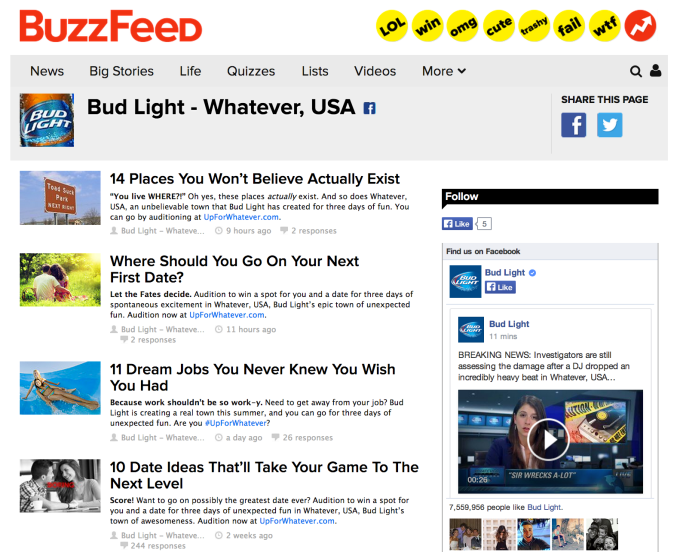 To keep BuzzFeed’s business working, it has to do two things.

First, raise the bar for its native advertising such that people can’t distinguish between ads and organic content. That might mean turning down advertisers if it can’t come up with a good native ad idea, or scrapping a campaign if the content produced feels lame or forced. Those are surely scary calls to make with millions of dollars and relationships with the world’s top brands on the line. But maintaining a quality standard is the only way to make native advertising a sustainable long-term business.

Second, it needs to keep driving more traffic to its homepage where people stumble across its native advertising in order to counteract any drop in click-through rates as less savvy users begin to realize what “Promoted by” really means

Currently 75% of BuzzFeed’s referral traffic comes from social media, which can be fickle. It may need to wean itself off the FaceTweet teat, or at least diversify its traffic sources as much as possible. As more publishers post more frequently to social media, competition increases and reach of all content decreases. Meanwhile the gush of social traffic is highly volatile since the platform owners can close the spigot with quick tweak of their algorithms, like how Facebook killed social readers. 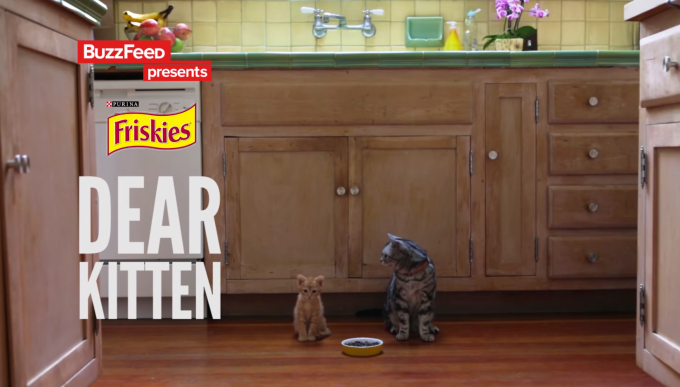 That’s why I expect BuzzFeed to focus on becoming a homescreen-worthy app, a homepage, or a spot on your bookmark bar — to become less of a BuzzFeed and more of a BuzzHome. By forging direct relationships with its audience rather than depending on mitigated channels to reach them, its power could grow. “If BuzzFeed is creating great content then the platforms will want them”, rather than chopping down the adolescent media giant’s reach, say Dixon.

Not all top 10 lists are created equal. Neither are all cat videos. BuzzFeed’s will have to be the very best if it wants us to see past the sponsorships.