Becoming a parent is an amazing, life-changing experience, but it can also be one that’s isolating and lonely – especially if your pre-baby social activities involved spur-of-the moment invites, happy hours, and nights out on the town. Parenthoods, a new Y Combinator-backed mobile platform, wants to help with the social isolation parenthood can bring by offering a community for local moms and dads where they can connect with others like them right from their mobile phone.

The company was founded by Siobhan Quinn, a former Foursquare and Google product manager, and Jeni Axline, previously a Director of Production at Say Media. The two are longtime friends who first met at University of Washington, before relocating to San Francisco to work in the tech industry – an industry which today still struggles with gender diversity issues. A majority of tech companies today are founded and run by men, from the executive ranks on down – and that, ironically, includes a number of companies those catering to the “mommy” crowd.

In fact, Parenthoods is the only company in Y Combinator’s current class where both co-founders are women.

The idea for the startup was inspired – like many ideas are – by a personal experience: Axline became a mom herself.

“Being home alone all day, you kind of want to pull your hair out,” she says, describing (accurately, I might add) what the those first months as a new parent feel like. Friends say they’ll come around to see the baby – and maybe they do – but afterwards, you’re stuck nursing and changing diapers and passing out from lack of sleep while your former friends are out and about, filling your News Feed with photos of the life it seems you’ve given up.

Meanwhile, your immediate needs, questions and concerns revolve around a whole new set of priorities. 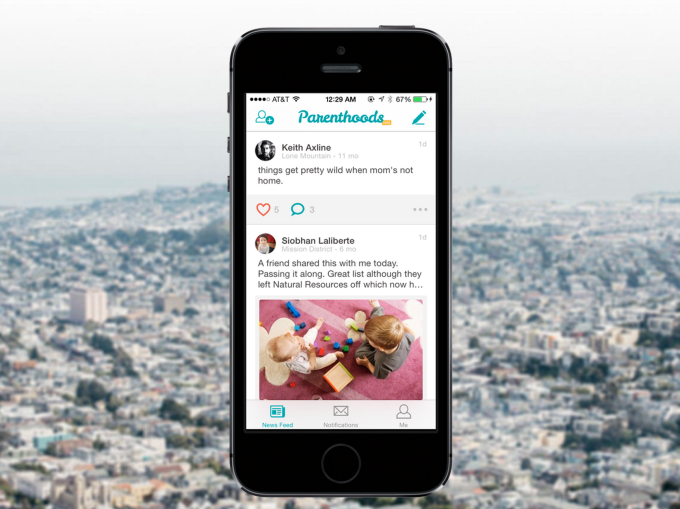 Available initially as an iPhone app, Parenthoods users can talk about their day-to-day problems and struggles, ask for advice, support, and even arrange local meetups or buy and sell kids’ items from others on the service.

Users are able to set up Twitter-like profiles, and even ask their “stupid” questions anonymously, so as to save them the embarrassment of not knowing something they think they should.

Going forward, the plan is to rank the posts you see in your main feed based on a number factors, including your age, your kids’ age, who you’re connected to on other social networks and more.

The company is only targeting the San Francisco area at launch, where they’ve been testing with a few hundred users, and have now gone live to the general public. “We know that getting the local use case right is going to be really important for us,” explains Quinn, who notes that the plan is to slowly expand the service regionally going forward.

Though early, the company is seeing heavy engagement from its first users – 25 percent of whom are active daily.

Taking On The Big Guys: Facebook, Google And More 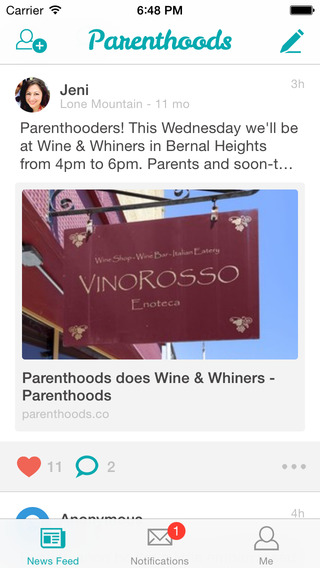 But as it scales, Parenthoods will face serious competition from several competitors, including most importantly, discussion platforms provided by large networks, like Google, Yahoo, and Facebook.

As a parent myself, I’ve joined and dropped a number of similar groups over the first few years of parenthood, including local Meetup groups, which seemed mainly to cater to the stay-at-home crowd; online and email-based discussion groups (e.g. BabyCenter, CafeMom, TheBump, Circle of Moms); and more recently, private Facebook groups for local moms.

Each of these platforms have their own set of advantages and disadvantages. Some are not ideal for mobile use. Others, like Facebook, are tied to your real identity, which some parents don’t care for. And so on. But Parenthoods’ founders say the real problem is that so much of this content is fragmented.

That’s why the company’s larger goal is not only to get moms and dads to switch to Parenthoods, but get these big parenting groups to do so first, and then their users will follow.

“We see a lot of the listservs and Google groups as being some of the best communities out there. We see ourselves building a platform for them – our goal is to figure out what we can build to get them to move to Parenthoods,” says Quinn.

Over time, the company may consider a paid tier to generate revenue, as some of the larger parenting groups like Golden Gate Mothers Group or Parents of Menlo Park do today.

The Parenthoods iOS app is available for download here on iTunes.