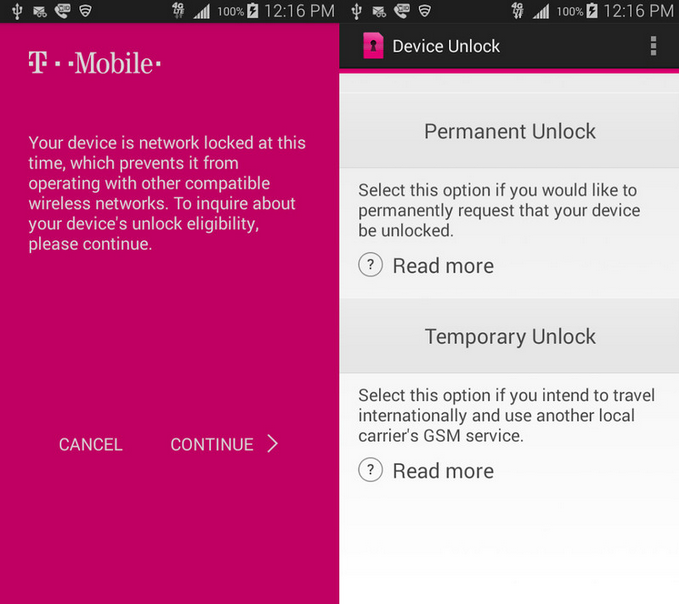 The good news: T-Mobile is playing with the idea of letting you unlock your phone (so that it can run on other carriers) with a single click. Hurray! No more convincing customer service to help you, or digging through endless forums for a tutorial that may turn your phone into a fancy paper weight.

The not-so-good news: they’re only testing it on a kind-of-meh Samsung phone for now — and even there, there are some catches.

The biggest catch is a fair one: to unlock your phone permanently, it has to be completely paid off. So, no, you can’t pop into a T-Mobile store, get the phone at a discount on an installment plan, then unlock it, cancel your plan, and ride off into the sunset.

You also need to have been with T-Mobile for at least 40 days, and your account must be in good standing.

But what if you only need the phone to be unlocked for a while, like when you’re traveling? Though it seems like T-Mobile is still working out exactly what the guidelines for a temporary unlock are, a second button within the app allows you to unlock the phone for up to 30 days without quite as many rules.

Alas, as mentioned, T-Mobile is currently only testing this on a phone that you probably haven’t even heard of: Samsung’s Galaxy Avant. If you’re on some other locked down T-Mobile phone, you’re stuck doing it the old way. [Or just skip all this nonsense and buy a phone that comes unlocked out of the box, like the fantastic Nexus 5]

Our buddies over at Android Central checked what happened when they stuffed the app into other Android phones, and it’s about what you’d expect: the app itself boots up just fine, but the unlock buttons are worthless.