A few months ago, I asked a simple question: “Can Google ever be beat?” The query was less about Google itself, and more a question about the potential of startups to disrupt the largest companies in our economy. Do we have the talent and capital infrastructure needed for nascent companies to grow and compete against mature incumbents? I argued strongly that we do not, but I based my analysis on conversations and impressions from my interviews and experience in Silicon Valley rather than from economy-wide data.

Now two researchers have released a report from Brookings looking into the issue of business maturity in America. The results are, unfortunately, deeply disturbing for those who care about the future of the startup industry.

The authors, Ian Hathaway and Robert Litan, used U.S. Census data to investigate the age structure of firms in the economy and how that structure has changed over time. 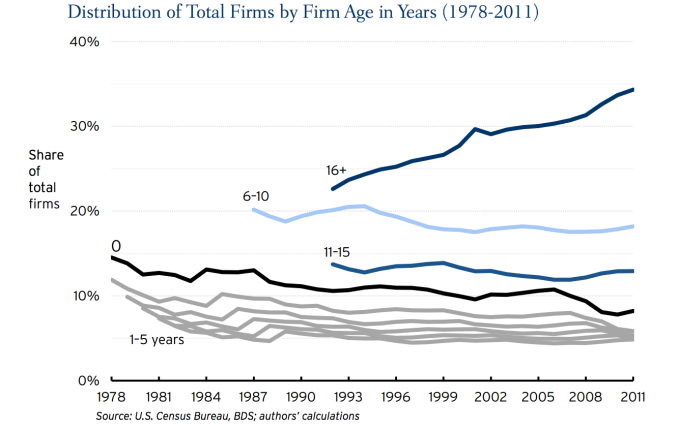 Their results show clearly that America’s firms are getting older on average. Take a look at this graph of the changing percentage of firms at different age levels. The proportion of firms greater than 16 years of age has increased significantly over the past two decades, appearing to be mostly at the expense of startups with less than five years of operations. 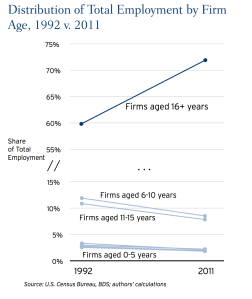 Another angle the authors study is the percentage of the labor force that works at mature companies compared to startups. Again, the results are not positive. As the second graph above summarizes, older firms are now employing a greater percentage of Americans than they were in 1992 — 77% of all workers, in fact, if you include government employees into the analysis, up from 67%.

Hathaway and Litan note that this observation is not limited to a single market or industry. “Perhaps more surprising is the sheer pervasiveness of this trend, which is occurring in every U.S. state and nearly every metropolitan area, across all firm size categories and broad industrial segments; even in high- tech.”

That last comment may be surprising walking around San Francisco these days, given that it seems like every building, nook, and cranny has some sort of startup working out of it (a dentist’s office I visited even had a startup working from the closet). 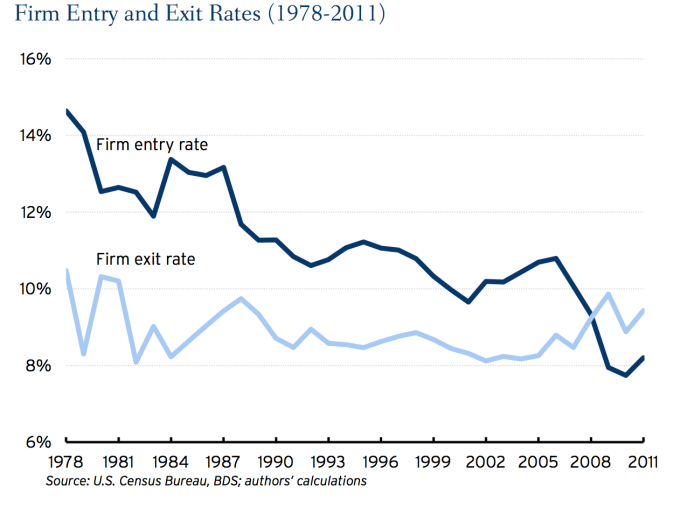 That makes it a bit harder to swallow the study’s conclusion that entrepreneurship is declining in America. The authors plotted the number of new firm formations over time, and noted a continuing decrease in the formation rate as can be seen in the final chart included above. This is less the case in Silicon Valley than it is in the rest of the economy (from CrunchBase data or other local data sources), but even here the trend is quite visible. With the exception of Facebook and Salesforce (which is 15 years old), nearly every major Silicon Valley company is older than 16 years.

Companies act like humans when it comes to these sorts of population statistics. The more young companies that are launched and incubated, the more mature companies that will be in existence in ten to twenty years, mediated by a failure rate (or the death rate in the case of humans). If there are less firms being created, then over time we would expect that the average maturity of firms to increase. Indeed, the study observes the interesting parallel between the age structure of firms and the same age structure of people in the United States.

Of course, older firms are going to be bigger and hire more employees. Scale takes time, with the typical firm taking almost a decade to go to an initial public offering or other liquidity event if it doesn’t fail along the way. It therefore shouldn’t be surprising that older firms employ the bulk of workers compared to smaller startups.

The challenge here, and what we should be worried about on several fronts is that the proportion of older firms is increasing. At a time when technology-driven disruption is supposed to be demolishing older firms, we are instead seeing a greater percentage of the workforce joining mature companies instead of younger ones.

At a time when technology-driven disruption is supposed to be demolishing older firms, we are instead seeing a greater percentage of the workforce joining mature companies instead of younger ones.

Part of the challenge here is that we have a strong survivorship bias in our community. We write far more about the success stories than we do about the failures, and so our impression of the age structure is mediated by our intense focus on a handful of top startups. While everyone knows there are a thousand startups for every Facebook (if not more), we rarely make the connection that such a high failure rate means that the typical firm may be aging.

That attention on a handful of winners in Silicon Valley from investors, engineers, and journalists also prevents more resources from going to startups in other areas of the country. One reason that new firm formation may be decreasing is simply that founders have more knowledge of the challenges of starting a business, with greater awareness of the steep obstacles to success in some places or sectors.

One answer the authors don’t address is that the efficiency of startups may be disproportionately greater than older established firms. Tens of thousands of people work at Hilton, but Airbnb employs just a fraction of that number. Back in 2012, the media loved to mention that Instagram had less than two dozen people when it sold to Facebook, compared to the tens of thousands who worked at Kodak.

Due to the limitations of the Census Bureau’s data, the study only considers the number of firms at different age levels, and not the economic power of those firms. That may provide a much more insightful answer on whether the United States is becoming more or less entrepreneurial. It may well be the case that while fewer firms are forming, those firms are efficiently building greater levels of wealth, but simply with fewer workers.

I believe deeply in the ideas behind Joseph Schumpeter’s conception of creative destruction, of firms that quickly grow up and break up while innovation moves quickly forward throughout the economy. It is the core of what great innovation regions do, which is why the data around firm age structure is so disconcerting.

Action here is the only antidote. We need to do more to make entrepreneurship a viable career option. We need to ensure that the world’s brightest have a pathway to build a startup in America, and we should do more to spread Silicon Valley’s resources to places where innovation exists but is not well nurtured. A geriatric economy is not a dynamic one, and we need to ensure that the next twenty years are just as innovative and progressive as the last two decades.