Facebook’s standalone photosharing app Slingshot is sidestepping its core “reply-to-unlock” mechanic by letting people send reactions to reactions that are instantly viewable, thanks to its first update for iOS and Android that just went out. This solves Slingshot’s biggest problem: the inability to carry on a normal conversation. Finding friends is easier now too thanks to an aggregated My People list, and it could get more viral thanks to the new option to send SMS invites to Facebook friends and your phone contacts.

As you can see in the example above, Joey slinged Drew a shot of a clothing store. To see it, Drew had to first sling a shot back to Joey. But then Drew could instantly react to Joey’s shopping pic with a question of “What shop is that?” Before, Joey wouldn’t have any way to directly respond. He’d have to react to one of Drew’s unrelated shots with a non-sequitur, or sling a new shot that Drew would have to unlock.

Now with the new reactions to reactions feature, Joey can immediately react to Drew’s question with text, photo or a video. In this case, he slung a photo of the store’s sign.

Reactions have easily been my favorite part of Slingshot, as I highlight in the hands-on video above. The ability to instantly send a laugh or terrified face back was what felt sorely lacking in Snapchat…that was until Snapchat made replies much easier. Last week it added the option to double tap someone who snapped you to immediately compose a reply that’s addressed to just them and skips the friend-selector screen. 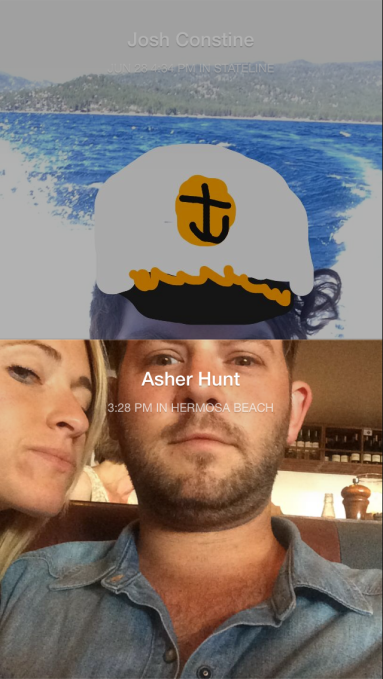 But Slingshot’s split-screen reactions also permit fun experiences like face mashes, where you react to a selfie by replacing their chin with yours to make some silly/scary chimera. Users will surely come up with new tricks for reactions to reactions.

Still, the feature is a bit risky. Rather than sending a new shot to carry on a thread, which you might have sent to other friends as well, you might stick with one-to-one slinging. Fewer mass-slings means fewer people getting notifications that tempt them to re-engage with the app. Slingshot thrives when you get to unlock tons of photos and videos with a single one sent, and reactions to reactions could thin those stockpiles.

I’ve been surprised how sticky Slingshot is, but the question remains whether it can gain mainstream popularity. It’s steadily slipped on the charts since launch, though there’s been a little pickup in the last few days, according to App Annie. 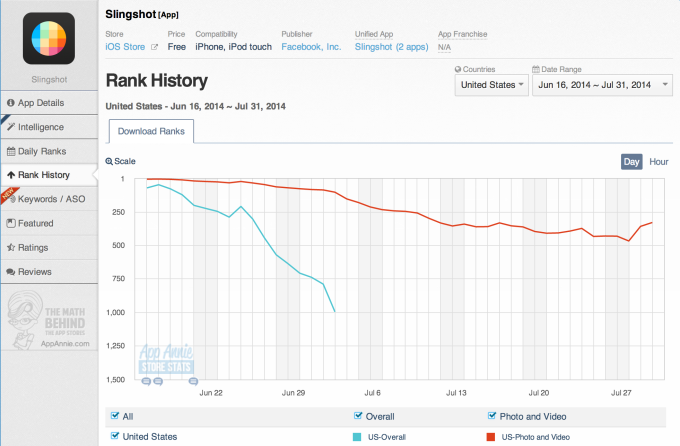 Facebook quickly pushed the app internationally after the U.S. launch, but hasn’t been throwing much cross-promotion at it. That may be necessary sooner rather than later. Slingshot thrives on network effect, and feels hollow if only a few friends are using it. If Facebook can’t get new users hooked before early adopters churn out, Slingshot might fade from people’s memory, no matter how many shots they have waiting to be unlocked.

We’ll have more details on the update shortly.