A German startup that’s built a mobile location-based network for families, called Familonet, which includes an automatic location notification feature is launching a spin-off side project app targeting small groups of friends or co-workers who might find it similarly useful to be automatically informed of each others’ whereabouts. The new app, currently in beta on Google Play, is called Closely.

Familonet has garnered some 100,000 downloads since launching in September last year, according to CEO & co-founder Hauke Windmüller, who declined to reveal active users. The app has evidently been relatively focused on the German market thus far, and the team hasn’t — he says — spent appreciably on marketing, relying on word of mouth spread.

Now, almost a year on from launch, it reckons Familonet’s underlying geofencing technology could be useful beyond that app, to other groups of people who may want to keep tabs on each other. The startup’s big claim is that this pinpointing tech is “more reliable, accurate and precise than other existing solutions on the market”.

“Over the last months we have repeatedly received feedback that Familonet app is very suitable not only for families but also for other groups of people. Students who live together in an apartment began to download and use Familonet to find out who is already at home. More and more children and young people, mostly girls, use Familonet to share their location with each other to get auto-messages about who has already arrived at the favorite café or at school,” says Windmüller, explaining the rational for launching a spin off app to take a second bite at the location-based networking cherry.

“This is why we’ve build Closely as a side project. Closely comes with a slightly different feature setting compared to Familonet (e.g. no alert feature, different design, Facebook integration of checkins). Closely perfectly meets the needs of children and teenagers who want to stay in touch closely to their best friends or a small group of others.”

Location-based services have had various ups and downs over the years. But it’s pretty evident that relatively few people want to broadcast their whereabouts to all and sundry — who’d of thunk it! — making the niche social network a more obvious home for location-based triggers.

Add to that, our smartphones are continuously tracking us these days, thanks to being so-sensor stuffed, meaning there’s no technical requirement for tedious manual check-ins — giving location services a boost, if only they can get around the ‘it’s a bit stalkerish to be tracked everywhere’ problem.

The idea of a service that tracks your movements and automatically broadcasts them to even your own family — sending notifications such as ‘Dad is leaving work’, ‘Dad has arrived home’, ‘Dad is in the pub’ — may well still be a tad much for some. What happens to trust if being technologically tracked by your nearest and dearest ends up considered the accepted norm?

Familonet has touted its European credentials on the wider data privacy point, noting that it has “only European hosting as well as service partner”, along with encrypted data exchanges. So, in other words, the NSA isn’t going to be spying on your family’s movements.

It also reckons it mitigates stalkerishness, from a user point of view, because its location triggers are geofenced only to places the user has predetermined as locations they are willing to share with their chosen circle. Such as, for instance, their home or place of work.

“In contrast to other location based networks the check-ins happen totally automatically with Closely, which is possible due to our superior geofencing technology,” says Windmüller. “To satisfy the requirements of reliability, accuracy and precision of our places feature we developed a new geofencing technology which smartly combines all three location determination technologies like cell tower triangulation, Wifi and GPS.

“It uses movement patterns and stochastic models to reduce the battery consumption while increasing the accuracy at the same time. These results in a geofencing technology which is up to 5 times more accurate than Apple’s & Google’s APIs and has up to 90% less GPS usage compared to competitors.”

Windmüller names Familonet’s main competitor as US startup Life360, while he reckons Closely will be competing against the likes of Apple’s Find my friends feature, Foursquare’s Swarm — and also messaging and photo-sharing apps like Taptalk and even (he says) Snapchat, given that Closely can also be used to share messages and photos with close friends too, as well as sharing movements.

“People don’t like to be tracked in real time on a map,” adds Windmüller. “In contrast to our competitors we reduce the tracking of friends to user defined geofences. In difference to for example Foursquare our biggest advantage is that this happens totally automatically without checking in manually. Just one look at the smartphone and you see ‘Natasha is at her work’, ‘Hauke has reached our favorite coffee at 2pm’ and ‘David has left school at 1pm’. Unlike other social networks, Closely is just for your inner circle of best friends and tailored for young people.”

The problem with all these location services is the network effect. It requires a critical mass of your closest friends to be also using it for the app to feel at all worth using. So Closely’s focus on small groups may help circumvent that barrier — given that it’s clearly going to be easier for a flat-sharing house of students, say, to get together and download the app in one go than it is for the average person to persuade all their friends who live in their general area to get on board with using a particular service.

Location sharing also makes more sense if you’re only sharing with the few, not the many — assuming the individuals in question can be convinced that the privacy trade-off will result in a delightfully enhanced social life not just friends joking about how much time you spend at home/down the pub. 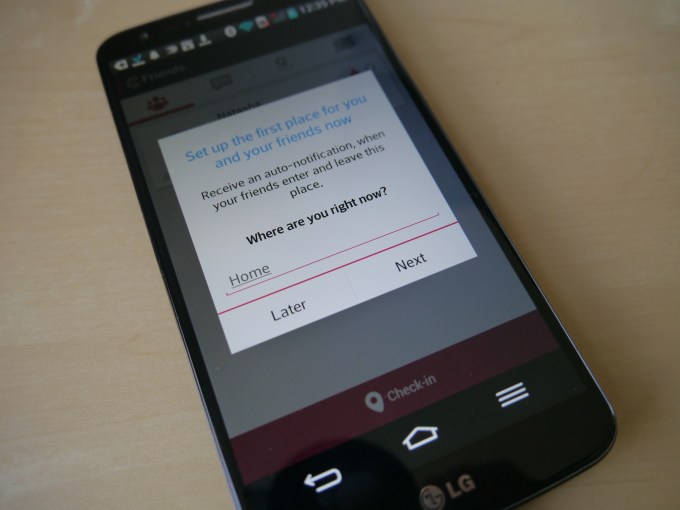 Closely itself will be a free app when it launches out of beta on Play (an iOS app is in the works). The aim is to monetize the extant network app, Familonet, via a freemium model, offering additional paid for features, says Windmüller. Closely may therefore mostly be a cross-marketing play, aimed at expanding interest in the family-friendly potential of this German-made geofencing tech.

Overall, the startup has raised more than €500,000 in outside investment, taking pre-seed financing from a Japanese business angel in November 2012, followed by a mid-size six-digit seed round in July last year from Venista Ventures, WestTech Ventures and HR Ventures, along with — at the same time — another six-digit chunk in public funding from the city of Hamburg.