There’s a battle brewing again in the land of the geeks.

Ever since 1994, when Robert Stephens launched his Geek Squad service in Minneapolis with $200 and a bicycle, his on demand IT department for consumers bestrode the consumer tech services landscape like a colossus with a pocket protector and Scotch-Taped glasses.

But like all wonders of the ancient world, the Geek Squad faces a modern threat. Geekatoo, the company that launched in 2011 to vanquish the Geek Squad is once again looking to emulate the work of tide and time and topple the colossal cohort Stephens assembled. This time it has raised $1.7 million in venture funding from investors including 500 Startups .

Founded by Kevin Davis, Geekatoo’s story actually begins nine years earlier with a visit to the local Best Buy Geek Squad, when a repair that was supposed to take one or two weeks resulted in a nearly lost laptop and a six-week separation.

Thinking there must be a more customer-friendly way to deal with computer issues, Davis and his co-founder Christian Shelton set about creating a service that would mimic TaskRabbit, Zaarly, or RedBeacon for computer problems exclusively (and considering Geek Squad pulled in upwards of $3.5 billion last year, it wasn’t a terrible idea).

Initially, Geekatoo had a sort of bounty model, where panicked customers with broken computers would post their problem to the Geekatoo site, and a local geek(atoo?) would bid their services and the poor frantic soul with the busted gadget would select whichever bid looked the best. Unfortunately… the model proved untenable. Davis says the company had only 50 customers in its first three years.

After 500 Startups put the company through its paces last summer, Davis switched the model to a fixed price for the service and the business began to take off, he says. Growth was impressive enough to catch the eye of not just 500 Startups, but a host of other institutions and individuals including 500 Startups, Eric Ries, DeNA, China Rock, Microventures, and Wefunder.

“If you buy a service contract, that’s what we’re selling,” says Davis. From roughly 50 customers at the beginning of last summer, Geekatoo is now looking at a $2 million run rate and some bigger business partnerships. 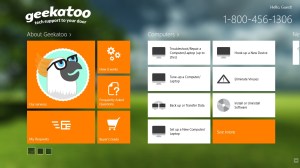 While they cradle their dying device in their arms, would-be customers can contact Geekatoo via a toll-free number or the company’s website. Once they relate the nature of their emergency, Geekatoo finds a geek and sends them out. Typically response rates for jobs mean that 60% of jobs are claimed within an hour, and over 90% are claimed within 24 hours, according to Davis.

Geekatoo has grown quickly as an independent business, but now it’s time to start looking for partners, according to Davis. The synergy that Geek Squad has with Best Buy is exactly the kind of relationship that Geekatoo is looking to mirror with its own business — just online. “Tiger Direct, Amazon, Buy.com… We want to go to them and say ‘We’ll be your Geek Squad,'” says Davis.

The company has a few partners already. Geekatoo is in a pilot program with a nationwide network of senior communities and is in talks with an undisclosed computer manufacturer to include its Windows 8 app directly into new devices.

For each transaction Geekatoo has it typically gets about $140 with roughly 1.2 services ordered. The company spends about $20 to get a user and makes roughly $35 to $40 per transaction, with the rest going to the service provider, Davis says.

Services range from PC and Mac repair to home theater setup to mounting televisions and setting up networks. “We do everything that Geek Squad does,” says Davis. “Just better, cheaper, and faster.”

The company even has Geek Squad’s founder recommending it.