Payment technology solution provider First Data has acquired mobile gift card platform Gyft, a previous TechCrunch Disrupt battlefield company which offers a mobile app that lets consumers organize, shop for and send gift cards to others. The company first launched its service in 2012, with its then iOS-only mobile gift card “wallet,” which has since expanded cross-platform to Android and the web, while growing its service to include cards from over 200 retailers.

The San Francisco-based, 18-person company had raised $7.5 million in funding prior to the acquisition, whose terms were not disclosed, from a number of investors including Google Ventures, Canyon Creek Capital, The Social+Capital Partnership, Karlin Ventures, David Sacks, Hass Portman, and others. 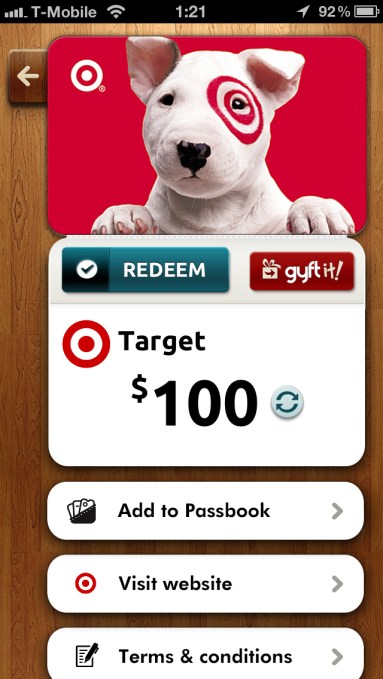 Following this deal, expected to close next month pending shareholder approval, First Data’s clients, including more than 300 national retail prepaid clients, will have access Gyft. The move will expand First Data’s gift card footprint and programs and add choice for consumers, the company stated in an announcement out this morning.

“Gyft, with its mobile gifting platform, and First Data, with its global scale and distribution network, together will accelerate the growth of virtual prepaid with powerful new tools for merchants of all sizes to deepen their relationships with their customers,” said Guy Chiarello, president, First Data, in a release. “This means that the same robust toolset deployed by big box retailers will be coming soon to small- to mid-sized businesses, perfectly synched with our mission to offer innovative solutions to help our clients grow.”

According to an interview with Pando.com, the acquisition had been in the works for two months, and was valued at under $100 million, but more than Clover, which exited to First Data for $54 million. The deal grew out of a partnership between the two companies, Gyft and Clover, which would provide access to digital gift cards to First Data’s SMB clients, the report explained.