An affordable yet high quality consumer 3D printer has turned out too good to be true, surprising no one.

The 3D printer market is generally sitting in a quasi-limbo state that’s progressed beyond proving itself on early adopters willing to shell out serious dollar to live the dream, yet still has a very long way to go — and specifically a lot of squeezing of price-tags and smoothing of processes —  before it can arrive at the joyous nirvana of mass adoption.

Analyst Gartner would describe this moment as the descent into hell the trough of disillusionment. Indeed, its 2013 hype cycle graphic pegged 3D printers teetering at the pinnacle of inflated expectations and about to take a big old nose-dive… 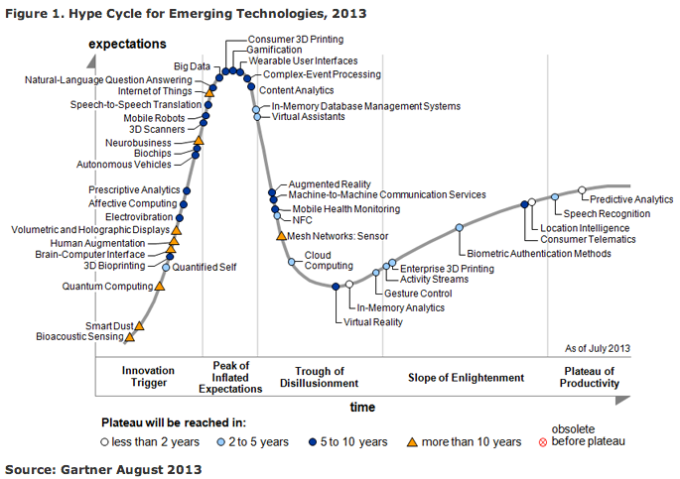 It’s therefore the best of times (peak interest) and the worst of times (failure to live up to expectations) for consumer 3D printers.

It’s also a time of enforced experimentation — as 3D printer makers see if they can shortcut to the volume market (Gartner’s ‘plateau of productivity’) by forcing prices down to levels required to pull the punters in, yet inevitably then coming a cropper on expensive component costs, or because they cut too many corners and the product ends up being junk or only able to churn out junk.

Latest to feel the sting of reality on their cheek is Mota. Earlier this month the company launched a Kickstarter campaign for an ‘affordable’ 3D printer, called Mota 3D.  To drive enough interest in their box to get the economies of scale to make production cost effective they priced a few units at a giveaway $99. Presumably they were banking on pulling in a multi-million dollar raise to make the project workable. (As The Micro did — albeit, with a box that pledged far less.)

A few days after launching their Mota 3D Kickstarter campaign, the company pulled the project — with co-founder Kevin Faro writing in a note to backers that: “I wish there was a way to offer truly high quality, highly precise 3D printers at incredibly low prices. That would bring about the mass market adoption that this technology so needs. The reality is, like any technology, it is expensive to develop and manufacture.”

“We don’t want to promise something that cannot be delivered, or whose quality is anywhere below outstanding, and the fact of the matter is that delivering that high standard of quality would cost a premium,” he added. “We have learned a great deal from your comments in the last few days. And they tell me we need to go back, work harder, and find a way to reduce the price even more as well as make the technology more open. So we are canceling the project until we can deliver on that promise.”

Full credit to Mota for pulling the plug on the campaign — which had raised nearly $65,000 in a few days — rather than taking backers’ money and under-delivering. Or failing to ship at all as we’ve all too often seen with crowdfunding projects (hardware especially).

The hard realities and tough economics of building in an emerging space like 3D printing have and will continue to turn many a grand vision into so much broken plastic.

It’s also interesting to note that Mota floundered on its approach to openness. Backers had complained about a proprietary cartridge design that would have required buyers to be locked into buying expensive filament from the company — or paying an extra whack of cash to get a generic cartridge which they could have paired with filament of their choice, but which would have meant the entire printer wasn’t quite so affordable any more. Moral of this story: consumers want it all and they want it affordable. So we’re going to see a lot more Mota type failures in the coming years — before we get to that 3D printer nirvana.