Migraines aren’t just awful headaches. They are a neurological condition that often come with cluster of syndromes before and after pain starts. These are called prodromes, which can warn some sufferers when a headache is coming, and postdromes, or “migraine hangovers” that can leave patients feeling exhausted.

As someone who gets migraines fairly regularly (about once a month), I consider myself lucky to have migraine prodromes, because they form a pattern that can potentially help me get treatment to ward off pain before it becomes too serious. I try to note down symptoms in my calendar immediately after a migraine. Unfortunately, this is difficult, especially in the postdrome phase, when I’m usually feeling too groggy to write anything down. 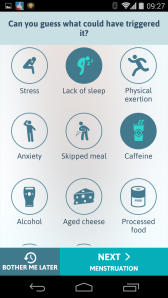 Singapore-based healthcare startup Healint has released a new mobile platform that it hopes will help patients and doctors do a better job of collaborating on migraine care. Called Migraine Buddy, it consists of an app that sufferers can use to keep a comprehensive record of their symptoms, and dashboard with data that doctors can reference during checkups.

One of the best parts of the app (and a key differentiator from other migraine trackers) is that it also collects movement and sleep data through smartphone sensor, so there is some data available even if patients forget to enter other information. 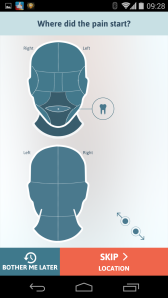 The app is currently available only for Android, but iPhone and lite versions (which can be used without a code from a physician) are in the works and Healint expects to release them by the end of this year.

Veronica Chew, Healint’s CMO and co-founder, said that Healint decided to work on a migraine app after talking to neurologists for their previous project, a smartphone-based alert system for stroke patients (TechCrunch profiled the app back in December 2013).

Since a lot of stroke patients don’t carry smartphones, and Healint wanted a bigger set of data to work with, doctors recommended that they develop tools for migraine patients.

“It’s the condition that they get asked the most about and a lot of patients have a history of not being able to tell exactly what happened. They can’t answer questions about whether or not certain treatments helped them, how many migraines they had, what they did, or what they were doing before,” says Chew. 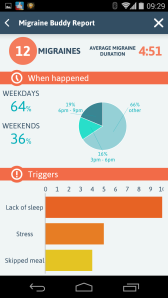 Migraine Buddy generates reports that can give patients and doctors a better understanding of what triggers their migraines, as well as the most effective treatments for them.

In other to collect the most information possible as quickly as possible, Migraine Buddy uses a wizard-style interface that asks about what patients were doing before they had a migraine, symptoms, treatments, where the pain started, and medications. User data is synchronized with a secured cloud database, so that it is available and safe even if a patient loses his or her phone.

If you are interested in testing out Migraine Buddy before the lite version is released, email contact@healint.com for an access code.