The TouchPico projector is launching today on IndieGogo. Announced at this year’s CES, it’s about as powerful as a mid-range Android phone, and has a camera that sees when you draw on the surface it’s projecting on — it basically turns any surface into a giant tablet-like display.

The TouchPico was a surprisingly quick performer when we tried it out in our offices last week. While you have to use the included stylus to get the most accurate control of the “screen,” it was responsive to taps and swipes and didn’t take too long to switch between apps. The interface is stock Android, though it’s running an older build.

In our demo with the TouchPico, we tried it out with a few games that would be fun for kids, playing a video on YouTube, and a PowerPoint presentation. The projector had no trouble keeping up with games like Fruit Ninja or drawing apps, though the trailer of Dawn of the Planet of the Apes that we tried to watch didn’t show up very well, even in low-light conditions. The PowerPoint presentation, which we tested using a free app from Google Play, was a bit too slow compared to hooking your laptop up to a traditional projector.

With that said, you can also do that with the TouchPico. It has an HDMI input available, so it’s possible to use it as a dumb display for your laptop, game console, or even your phone. Darker content might not show up too well, but colorful apps for kids seem to work just fine. 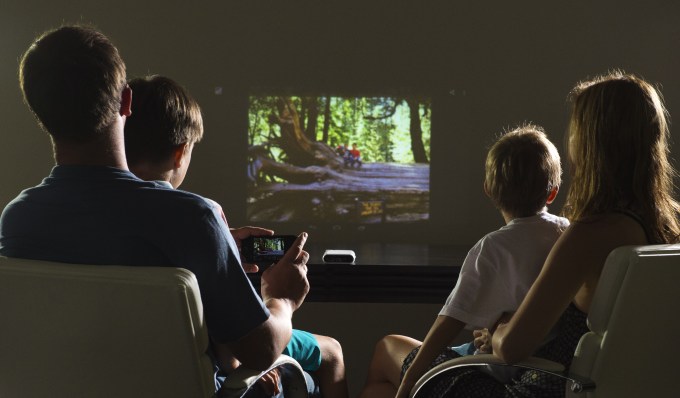 At $350 on IndieGogo (and $500 later), the TouchPico is in the same ballpark as an iPad Mini in terms of price. Most individual gadget users would best be served by buying a tablet that can use all the same apps for the same price or less, with a better looking display. I think it could be fun for families, as the experience is closer to spending time around a physical game board than passing a tablet around, or even playing a multiplayer game on a console.

Business users who make frequent presentations in many small venues and don’t want to rely on setups at each location might also find the TouchPico to be a useful tool, though I don’t know how many people actually have that use case.