The developer behind the mobile voice app Bolt is none too pleased with Instagram‘s decision to launch what appears to be a new mobile messaging app by the same name. Bolt, a new app from Instagram, is expected out this week, we’re hearing. Meanwhile, the original Bolt’s founder, Andrew Benton, has published a blog post imploring Instagram to reconsider its name choice to avoid a legal battle.

“We know it’s a great name, because we chose it last year when we set out to build a better mobile voice and messaging experience,” writes Benton on the Bolt company blog. “We’ve worked really hard since then building the Bolt band and technology to where it is today. Please don’t destroy all that effort.” 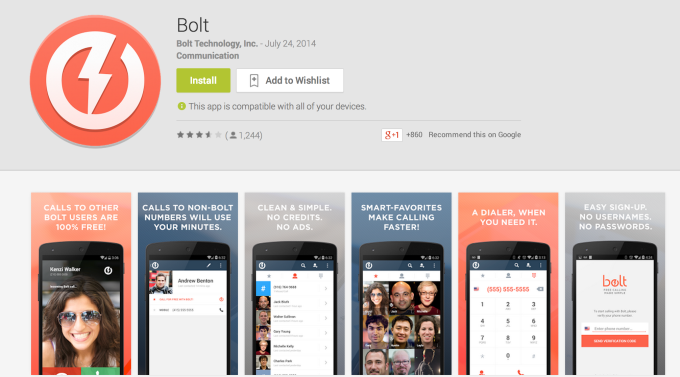 Benton tells TechCrunch his company already has a trademark on file for the name “Bolt” as it relates to mobile messaging, but the application is pending. However, the name has been in use in the market for a year, and the company will have to “police our mark” in order to not risk losing it.

To catch you up, in case you don’t know what all the hubbub is about:

Last week, a small number of Instagram users reported briefly seeing a banner advertisement for a new app called “Bolt” within the Instagram mobile application. The ad, which described Bolt as “one tap photo messaging,” linked out to a non-functional URL on the Google Play store. Although a number of outlets were reporting that Bolt was a new app from Instagram, there was nothing in the original leak to confirm that speculation and no news outlets had sources backing up those claims at the time.

After all, the banner also looked like it could very well be an app install ad test on Instagram, possibly even using a “dummy” or placeholder app.

However, TechCrunch has since learned that the original speculation is true – Bolt is being launched by Instagram as another photo-messaging app, and it’s expected to arrive this week. That backs up something else we were hearing – that Facebook (Instagram’s parent company) has some “big stuff” planned for this week, and Bolt could be a part of that.

For Benton, Instagram’s decision to use the name “Bolt” could create some market confusion, since both apps are broadly focused on mobile communications, and both appear to use similar pink-hued logos featuring a white lightning bolt.

But Benton’s mobile calling app and the forthcoming Instagram Bolt app differ in that one is currently focused on voice communications, while the other is photo-messaging of some sort.

Still, the challenge for Benton is that Bolt’s long-term goal was to move into messaging. He explains to TechCrunch, “I doubt that Instagram’s Bolt will try to move towards becoming a replacement for carrier voice and SMS, but by launching a photo messaging app they would effectively preclude us from continuing to develop our service into messaging, which we are currently working on and plan to launch this fall,” says Benton.

“This has been our plan all along, and has been a major part of every investor pitch we’ve made,” he notes.

This isn’t the first time Facebook has used another developer’s app name for its own products. Previously, Facebook launched “Paper,” despite the fact that there was already a well-known and much-loved drawing app, “Paper by FiftyThree,” already using the same name. The social network launched its new app as “Paper – Stories from Facebook,” and that name remains today.