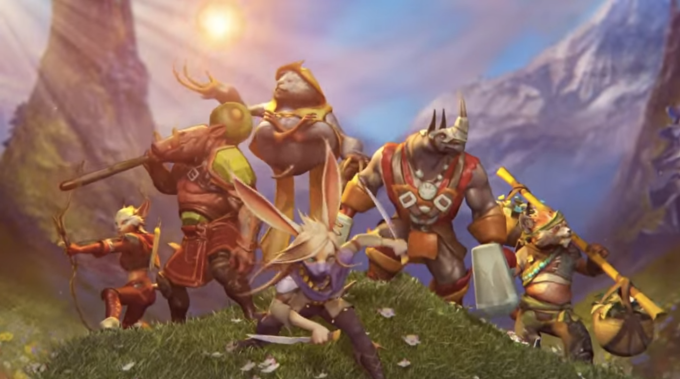 Thanks to the unprecedented success of Riot Games‘ League of Legends, the multiplayer online battle arena (or MOBA) genre is the hottest space in gaming. Besides Valve’s Dota 2, which has achieved international success in its own right on the PC, a number of developers are hoping to strike gold by repeating the formula on tablets.

Released earlier this month, TechCrunch Disrupt alum Hammer & Chisel’s Fates Forever is a well-executed attempt to bring the MOBA to tablets. It doesn’t bring every feature in League of Legends to your iPad, but as you play you realize that most of what’s missing is fat trimmed to make for a better handheld experience.

Everything is scaled down in Fates Forever. Instead of playing 5 versus 5, each team has 3 players; instead of 3 “lanes” to struggle over, there are 2. There’s also less diversity in characters showing up in matches — there are only 10 playable characters (with 4 on the way), and since not everyone pays up for characters (or puts in the tens of hours needed to unlock them), you’re going to fight the same characters over and over for a while. Hammer & Chisel has been running daily challenges that give extra in-game credit and giving surprise gifts of characters to keep matches from getting stale.

Matches don’t last anywhere near as long as they do in League of Legends or Dota 2. Rather than committing to 45-minute experiences, a match in Fates Forever is generally 10-15 minutes long, which feels much more reasonable considering how most people use their tablets. You can play a match, go check Twitter, and come back for another round in the time that it would have taken to start planning your late-game strategy in a PC MOBA.

In a lot of ways, Fates Forever seems like a good way to get younger or inexperienced gamers into the MOBA genre, which is notoriously difficult. If you buy the $20 “launch” bundle, you get all of the characters that have been announced so far, which significantly increases gameplay variety. I doubt that the bundle is going to go away any time soon though — the normal price for the characters it includes is $84.99, which sounds ridiculous to the casual/beginner audience.

Since you don’t have a full keyboard in front of you during games, players have fewer opportunities to explode into vulgar-flush rants against less-experienced players, an issue Riot Games has acknowledged is a problem in the League of Legends community. There’s a chat room shown immediately after each match, but so far I’ve only experienced polite exchanges or silence, which is nice.

The length of matches also reduces the amount of planning required to stand a chance in a game. There are fewer stats and items to keep track of, and the game is more forgiving about the timing of attacks since it has to account for the inaccuracy of taps from players like me with fat fingers.

Hardcore gamers might be turned off by the limitations that come with playing on a touchscreen, especially on the iPad Mini. You have to partially block your view of the action to tap when moving your character or attacking, and without the mouse and handy shortcuts available on the keyboard you simply cannot control your character as accurately as you can on a PC.

While Fates Forever seems more enjoyable for casual gamers than the popular PC MOBAs, that audience’s usage patterns might not mesh well with hardcore players. A common complaint on the Fates Forever forum is that there are too many players who start games and then abandon before they’re over. Most of the posts about the subject are suggestions for ways to reduce this behavior, which can make games unfairly challenging for the remaining players when someone leaves.

I’m the guy who enjoys watching Dota 2 on Twitch instead of committing an hour to actually playing a game. For those who consider themselves casual gamers, Fates Forever is a fun way to occasionally dip into that style of gameplay without facing the wrath of hardcore players. If you enjoy League of Legends ands its competitors on the PC, it might be a good way to fill short gaps in your schedule, but you might find everything a bit too simplistic.

Here’s what a typical game of Fates Forever looks like: