As reports of Google’s interest in buying Twitch continue unabated, it’s clear there’s an enormous market for video of gameplay. A few players stepped up a couple years ago to tackle the same concept for mobile gaming. Y Combinator-backed Kamcord was one of them. They built a layer that developers could integrate, letting gamers easily record and share their gameplay. After raising $7.1 million at the beginning of May, they’ve grown their share rate by four times.

Co-founder Aditya Rathnam says that the company is seeing one hour of gameplay video uploaded every minute, or about 1 percent of YouTube’s total volume. There are about 14 million videos in total recorded so far. Rathnam points out that Kamcord is still just a 17-person startup despite these figures.

“We’re now in a really good place and we’re seeing a really tremendous amount of growth,” he said.

It was a couple key partnerships with well-known games like Outfit7’s Talking Tom series and Stickman Soccer that drove up their volumes.

Now the next step is not to be just a layer, but a destination. That’s why the company has built a standalone mobile app where you can watch gameplay videos from friends or competing players. There are your standard social features, like the ability to follow top players, learn tips from other gamers and chat about trending videos. 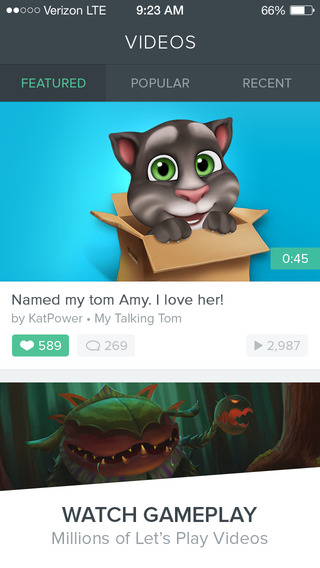 Kamcord competes with a number of other products, including Applifier, which just merged with gaming engine Unity.

Rathnam says the two companies have slightly different product philosophies. For one, Kamcord doesn’t require you to register as a user and it also is not as heavily focused on being a cross-promotional ad network where you might be prompted to watch replay videos from many other games.