Last year, Google launched Maps Engine Pro, a service that aims to make it easier for businesses to create, manage and share maps to visualize their data. Until now, this offering was purely about map creation, but today, Google is adding Maps Coordinate into the $5 per month/user Maps Pro subscription service and is building it right into the existing Maps Engine Android app.

Maps Coordinate is Google’s tool for helping businesses dispatch, manage and track mobile field teams while they are out and about. It features an iOS and Android app, as well as a web service for managers and dispatchers. Previously, this service cost $24 per month and user (or $20 for an annual subscription), but now it is part of the much cheaper Maps Engine Pro subscription.

Using the mobile app, employees can receive new assignments and pull up information about their current ones. Maps Coordinate also allows admins to specify certain data that their employees have to collect while they are out in the field (client contact data, for example). 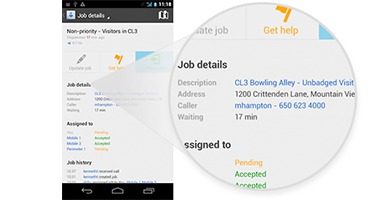 When I talked to the Maps Coordinate team before the service launched back in 2012, its product manager Dan Chu told me that the main idea behind Coordinate was to keep it as flexible as possible. It is meant to work for both large enterprises and small businesses that only have a few people out in the field.

Now that Maps Engine Pro includes access to Coordinate, a building management firm could use Google Maps to organize its building on a map and then use Coordinate to dispatch the nearest worker to one of them when a maintenance call comes in.

As Google tells me, there haven’t been all that many changes to Maps Coordinate since it first launched. The most important launch for the team until today was likely the iOS app that arrived in January 2013. Now that it is a part of the overall Maps Engine service, it’ll likely get a few more updates, though.

The company isn’t making any current user stats for Maps Coordinate available, but with the addition to Maps Engine Pro and the more affordable price, more companies will likely take a look at it. Current users that Google has highlighted in the past include Australia’s Architectural Windows & Doors and the San Francisco 49ers.

To give more teams a chance to use the service, Maps Coordinate is now also available to any user with a Google Account. Previously, it was only available to paying Google Apps subscribers.