Vingle is a fun, community-oriented site from two of the three founders of Viki, the crowdsourced subtitling platform that was acquired by Rakuten for a reported $200 million last year.

Changseong Ho and Jiwon Moon saw how devoted fans on Viki were to translating and subtitling the dialogue in their favorite movies and TV series, and wanted to create a network were people could participate in interest-based groups about things they are equally passionate about.

Vingle is based on Korea, but with the launch of its iOS app, it hopes to find more users in different countries (the site already has a large cohort of English-language participants). It’s also available on Android.

On Vingle, fans can join groups focused on things ranging from men’s and women’s fashion to trending topics like the Tour de France. The site currently has 2.3 million visitors and in June it saw 100 million page views.

“If you look at the history of our founders and Viki, they were really fascinated even before Viki to find communities of subtitlers. The question raised was why are these people doing this subtitling and translation for free? They are driven by being in a community they love. The founding vision of Vingle is to share with likeminded people about everything, not just videos,” says Mark Tetto, Vingle’s chief strategy officer.

In Korea, Vingle competes with Naver Cafes, which is a community platform by the maker of messaging app Line. Vingle is also similar to Reddit, but it takes a much more visually-oriented approach. 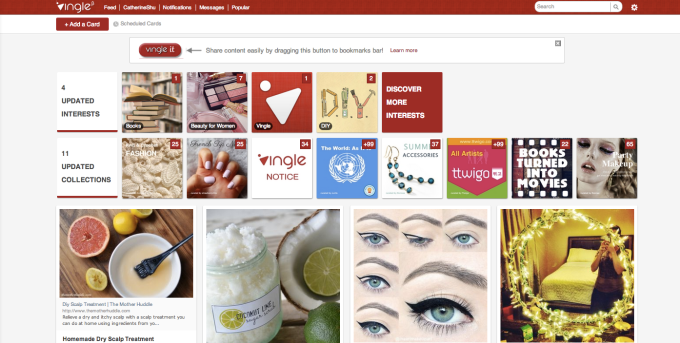 There are also commonalities between Vingle and Pinterest, because both are heavy on content such as fashion, DIY, and entertainment and have a similar mosaic-style layout.

To set itself apart from Pinterest, Vingle is redesigning its website. “We are in a stage right now where we’re defining who we are as a community platform,” says Tetto. “People see the UI and it feels to them like Pinterest, but that will change very much.”

“More generally, it’s about what is a community versus just interests,” he adds. “We provide spaces people can join. There are over 3,000 communities and they are very tailored to your particular interests. One of the hardest things to do is to create a massive audience, whether you are on Pinterest, a blogger, or on Facebook.”

Part of Vingle’s appeal to users is an instant audience for their contributions in groups with memberships of thousands of other people. Though Vingle is still hashing out a monetization strategy, the same thing may also appeal to potential advertisers because they can quickly see what other interests specific groups tend to gravitate toward.

“The structure of the service is really different than other social networks because if someone likes a product, like Chanel, you can find what else they love, what they like to eat, or what kind of cars they like. So right now our content system has that potential,” says Sanghoon Kim, the site’s director of marketing and communications, adding that Vingle may eventually monetize by showing sponsored content relevant to each group.