Duolingo, the free language learning service, today announced the launch of Test Center, its digital language certification program. The company is launching this service with an English Proficiency Exam that will rate your language skills on a scale from one to ten, but it expects to expand to other languages as well. For the time being, the certificate is available for free, but the company plans to start charging $20 for it once more universities and companies accept it.

Standardized English exams like the Test of English as a Foreign Language (TOEFL) that almost every foreign student who has ever wanted to study in the U.S. has to take are a big business and essentially operate like monopolies. As far as I am aware, Duolingo is the first startup to take these standardized tests on directly.

Taking tests like the TOEFL expensive, though, and as Duolingo founder Luis von Ahn told me in an interview earlier this week, often require long commutes to the cities where the tests are administered and the ability to schedule those trips weeks in advance. He himself had to travel to a different country to take his test when he first came to the U.S. to study.

It’s not just universities, though, that expect to see these tests from prospective students. Many large international corporations also now require them and some countries like the U.K. want to see your scores before they give you a work visa. 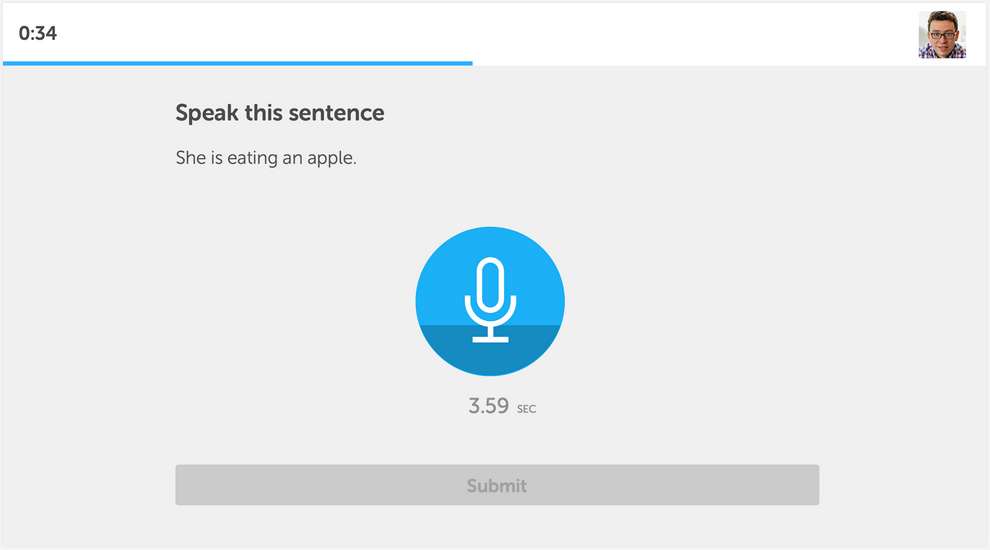 Duolingo wants to break these monopolies up. This project wasn’t always on the company’s roadmap, but more and more users were starting to ask the team for ways to certify that they really learned a language. “That’s how we started looking at how this whole industry works,” von Ahn said and in the process, the Duolingo team realized how many issues there are with the current process. It probably just costs a few dollars to administer a test like the TOEFL, for example, but because these companies are essentially monopolies, they can charge huge markups. “So is the nature of monopolies,” von Ahn said.

Another major problem with today’s tests is that they are prone to fraud. Too often, test takers have somebody else who looks a bit like them take the test for them or they actually bribe the proctors. That’s clearly something the Duolingo team took very seriously when it developed its application. When you take the test, the camera and microphone on your phone or laptop record everything you do. After you have completed the test, that video is then watched by a Duolingo proctor who checks that everything is kosher. The video is also attached to your digital certificate, so if somebody else ends up taking the test for you, it’ll be pretty easy to spot by a university administrator or potential employer.

This rather labor-intensive fraud protection mechanism is the biggest cost factor for Duolingo in bringing this service to market. For now, however, the company has decided to take a financial hit and make the test free while it works on finding more partners that will accept it.

Currently, Carnegie Mellon is working with Duolingo to run more studies that show how well it predicts language proficiency. A University of Pittsburgh study already shows that Duolingo test scores correlate highly with TOEFL scores, but it will surely take a bit more work to convince other schools of this, too.

For now, the mobile app is only available on Android and the web, but Duolingo is also working on an iOS app and von Ahn expects it to launch in September.