Fast-growing Chinese Android smartphone startup Xiaomi, which earlier this month reported that it had shifted ~26 million handsets in the first half of this year, has unveiled a new flagship device which it will be hoping powers it over its sales target of 60 million smartphones in full year 2014.

Also today, and as rumored earlier this month, the company took the wraps off its first wearable: a fitness and security bangle called the Mi Band, which costs a throwaway $13.

Xiaomi’s new flagship handset, called the Mi 4, is a premium smartphone that competes at the top of the market — lining up against Samsung’s flagship, the Galaxy S5, and of course Apple’s iPhone 5s. And, on the latter note, the Mi 4 looks to have taken some design cues from Apple with distinctly iPhone-esque metal bands running around its edges.

Specs-wise, Reuters notes that the Mi 4 has a 5-inch 1080p display, much like its prequel — the M3. The processor has been beefed up from 2.3GHz to 2.5GHz though, with a Snapdragon 801 chip inside the M4. It also reportedly comes with 3GB of RAM, 16GB of internal memory, a high capacity 3,080mAh battery, and a 13MP rear camera and 8MP front-facing lens.

The biggest change is evidently to the design, though — it’s out with the Mi 3’s rounded plastic sides, and in with a flat metal wrapper that has a distinctly iPhone look. According to Reuters, at its unveiling at the National Convention Center in Beijing earlier today, the Mi 4’s design drew murmurs of “iPhone” from the crowd.

Back in May, Xiaomi unveiled its first tablet device which also appeared to take design inspiration from Apple — being an iPad mini size combined with the colourful, plastic-backed appearance of the iPhone 5c.

The addition of a little ribbon of metal to Xiaomi’s new flagship may not sound like much, but it offers a trump card over Samsung, which has continued to stick with plastic for its flagship devices. In China Xiaomi’s mid-tier RedMi handset has been wooing former Samsung owners from the lower end of the product range. The company is presumably hoping a flashy premium handset can squeeze Sammy at the top end, too.

Demand in India for Xiaomi’s Mi 3 handset — its prior flagship, which only went on sale in the country today — apparently crashed Flipkart, according to a BGR India report. The e-commerce site had taken in some 100,000 pre-orders for the Mi 3 in India.

In addition to a new smartphone, Xiaomi unboxed its first wearable today: the Mi Band. As well as tracking health metrics such as steps and sleep, the bangle can be used as an identity authenticator to unlock a Xiaomi smartphone, i.e. rather than having to type in a password. It also includes a sleep-cycle alarm clock. So Xiaomi is bundling fitness and security features in one wearable to increase the utility.

At such a low price (79 renminbi), the company has a big chance to drive serious scale with the Mi Band, as analyst Ben Wood notes below.

The company is also evidently designing the bangle to encourage users to stay within a Xiaomi ecosystem of devices — which spans Wi-Fi dongles, set-top boxes, phones, tablets and now wearables. 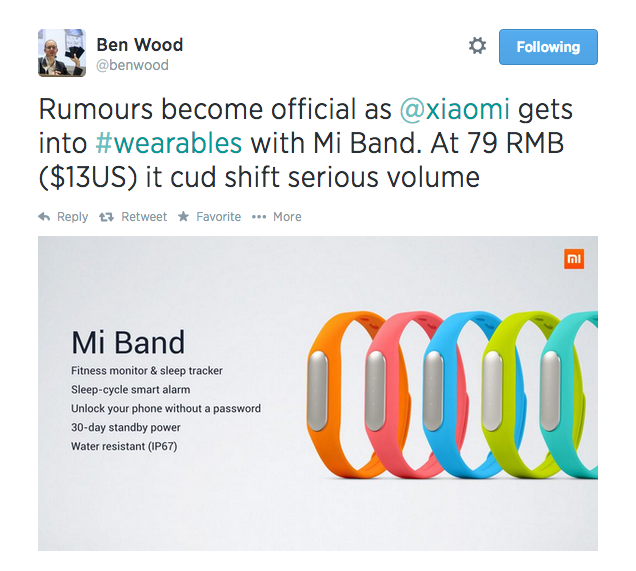