Independent ad network InMobi is touting a new solution for developers to take advantage of gamers’ emotional states to produce high click-through rates on advertisements in their games. Along with tools for including interstitials that look like part of the game experience and ads that give you gameplay bonuses for watching videos, the company’s SDK now includes playable ads powered by TechCrunch Startup Battlefield alum Voxel‘s app virtualization tech.

To better take advantage of the different ad units available, InMobi decided to take a more in-depth look at how ad placement could be informed by gameplay. The company claims that its research shows (PDF) that using these different ads at different points in the gameplay experience can significantly boost engagement by playing off of their emotional state.

For instance, let’s say you’re playing a game like Flappy Bird. You die pretty regularly, which makes you pretty frustrated. Are you going to click on a banner ad that pops up, or will that only upset you more? Apparently 20 to 40 seconds playing something else — the approximate length of demos in InMobi’s playable ads — is a welcome respite when a game is wearing you down. According to InMobi, gamers in this state clicked on its playable ads 275 percent more than traditional banner ad units.

The following graphic shows which ad unit works best based on what a player is going through: 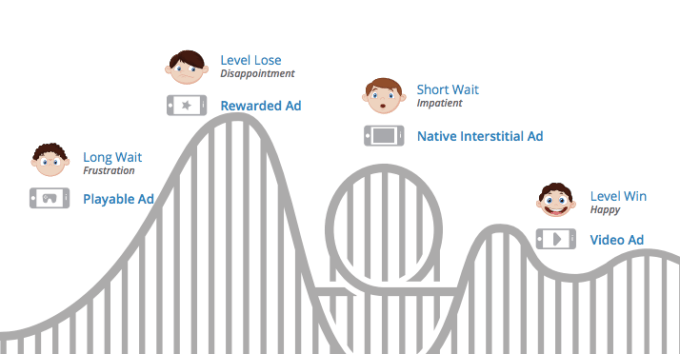