The Mountain View, Calif.-based company, which is backed by investors including Kern Whelan Capital, has brought the Peek service out of beta to give developers, designers and marketers a way to see real people using their website, mobile app, or mobile site, the company says.

Anyone who wants to have UserTesting give their site a workout can log in the site name, UserTesting then provides their own “user” who will run through a basic checklist of questions while navigating the site and recording their thoughts on their progress.

A company then can get a video of the user on the site — basically a voiceover narration of the “user” moving through the company’s website — or working with the mobile app or site — with a video of their screen as they work through the site and answer the questions provided.

The service could be a boon for small businesses that typically don’t have the money to engage in what’s typically a pretty costly process, according to UserTesting chief operating officer Chris Hicken.

It seems to be working. In just over 4 months the service has been downloaded 40,000 times, according to the company.

“Traditionally, user testing was so expensive and complex that only big companies could afford it,” said Ex-Apple.com Manager and Co-Founder of UserTesting Dave Garr. “So I wanted to find a way to make it available to everyone.” 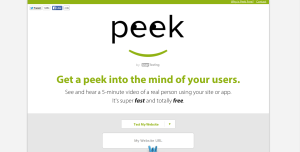