Venture capitalist Tim Draper said he’s submitted the 1.3 million signatures to get an initiative on the ballot in 2016 that would split California into six separate states.

Draper’s argument is that California state government needs a reboot and that it needs to be broken into smaller, more responsive political bodies because 38 million people is just too many people to have under a single state government. He points out that the state’s K-12 education has dropped to the country’s bottom decile and that state’s infrastructure spending has declined dramatically over the last generation.

Well, I don’t really know what to say. But there are two big considerations.

1) Congressional approval. Would the U.S. Senate decide that it wanted to add 10 more senators? There’s a discussion of both the state and federal hurdles that they initiative would have to overcome if it passed here.

2) Water rights. Los Angeles and the San Francisco Bay Area are net importers of water from more rural regions of the state. Other critics have pointed out that breaking the state apart would increase socioeconomic inequities between the different regions, but Draper says that it’s the poorest states that the initiative seems to poll the best in. Perhaps the other states could charge a whole lot more for water access to fund their infrastructure and schools. 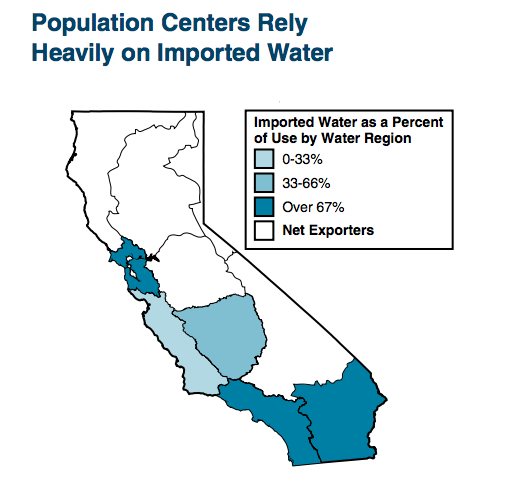 This is not to mention how you’d break the state university and prison system apart or how you would fund a proposed high speed rail line from the Bay Area to Los Angeles. Or how you would split the state’s long-term liabilities, which added up to $354.5 billion in the beginning of this year.

You can read the full legislative analyst’s report below here:

Yes. We have 101 municipalities, nine counties, at least 10 different overlapping public bus and rail systems each making their own decisions, which has led us to the affordability crisis we face today. Some of the problems he’s pointed out in earlier interviews are the result of exceptionally fragmented governance.

Draper also conflates a lot of the factors leading to the state’s poor K-12 performance. For one, about a fifth of the students in the state’s public schools are English language learners, which is a problem that more ethnically homogeneous states don’t face.

Furthermore, it’s the very ballot initiative process that Draper is using to push Six Californias, which has made school funding and governance increasingly confounding over the last three to four decades. Remember 1978’s Prop. 13, which gutted property tax revenues funding the state school system? Or 1988’s Prop. 98, which tried to stabilize state funding for public schools but didn’t specify where that funding would come from? Or 1990’s Prop. 111, which tried to make Prop. 98’s school funding rules more flexible so that the state legislature could pass budgets?

Here’s a question. Would any of the six proposed Californias inherit the direct democracy system which has so beleaguered their parent state?