Sling Media is one of those companies that every now and then you forget about, but they just keep chugging along and occasionally putting out new products. Founded a full decade ago, the company is now a wholly-owned subsidiary of cable and satellite vendor EchoStar, and yet it’s still building new stuff to get its user base excited.

Today Sling is introducing a couple of products — the Slingbox M1 and the SlingTV.

The latest additions to the Sling product family are reiterations and upgrades to its most recent new hardware, the Slingbox 350 and 500 models. Launched 18 months ago, those boxes were Sling’s first new pieces of hardware in years.

The $150 Slingbox M1, which is $30 cheaper than the Slingbox 350, was designed as a pure streaming device. It captures your video feed and sends it out into the Internet, where you can access it through a number of mobile, tablet, and connected TV devices, as well as through your web browser.

Unlike the 350, it has WiFi for easy setup, and integrates with a couple of new apps built for the desktop, as well as its mobile apps. (More on that later.) In addition to watching live TV remotely, which was Sling’s original raison d’etre, users can also play and schedule DVR recordings through the new box.

The new SlingTV is basically just an updated version of the old Slingbox 500 with a spiffy new user interface. Like the M1, the $300 SlingTV box lets people stream their favorite live and pre-recorded TV shows on other devices. But with the latest update, Sling Media is looking to improve the experience for browsing, discovering, and navigating content in their living rooms.

For customers who don’t have a smart TV and aren’t planning on buying one anytime soon, the SlingTV interface will likely provide an upgrade over their existing grid channel guide. The new electronic program guide incorporates cover art tiles displaying information about programming and also provides personalized recommendations based on reviews, program popularity, and social activity. 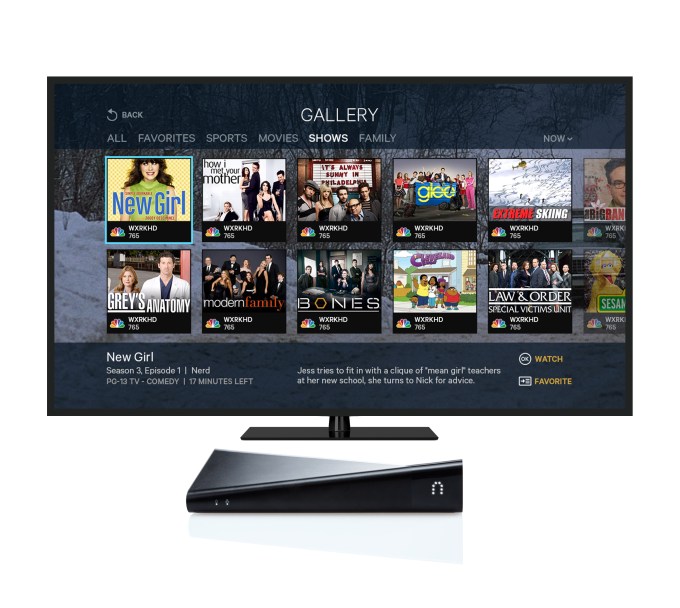 In addition to providing a more visual experience, the new visual interface allows users to filter by popularity, favorites, and various different genres of programming. For movies, the UI adds Rotten Tomatoes ratings, and for sports the UI instantly highlights scores, stats and other information.

In addition to the new hardware, Sling is introducing new clients for Windows and Mac computers. By doing so, Sling is bringing the streaming service out of the browser and making it easier and more responsive to use.

UPDATE: Sling confirmed in a tweet to TechCrunch that the apps for PC and Mac will be native, and will launch alongside the M1 this weekend.

It’s also supposed to make the hardware easier to set up, by enabling users to wirelessly connect directly to the devices and enter in their WiFi and account information. (In practice, the implementation doesn’t seem to be as drop-dead simple as they promise — it took three phone calls and multiple hours for me to walk my family through setup remotely.)

For those who already know and love Sling products, the latest hardware is a step up over what’s out already. The M1 goes on sale on Sling.com and with select partners on July 20, while SlingTV hardware will become available in late August.