Berlin-based Airfy, maker of the Airfy WiFi router that our very own John Biggs called one of the sexiest Wi-Fi routers he’d ever seen (and the man has doubtless seen a lot of WiFi routers), is launching a crowdfunding campaign for a new product today. Rather than tackling the ugliness and (often) stupidity of WiFi routers, the Airfy Beacon is an attempt at making the smart home, well, smarter.

The idea is that by placing Airfy’s Beacon sensors around the home, coupled with your smartphone and the startup’s app, otherwise disparate ‘smart’ products, such as Google-owned Nest’s smart thermostat, or smart lightbulbs from Philips, can be better integrated, bringing a level of automation not always seen.

Individual smart home products feel as though they are on the cusp of becoming mainstream. However, as William Gibson is often quoted, “the future is already here — it’s just not very evenly distributed”. No more is this true than regards to getting each of your disparate ‘smart’ products to integrate with your home as a whole or be truly automated, rather than simply being ‘connected’. Yes, there are integrated systems based on competing standards, but these are largely sold by home automation specialists and are often prohibitively expensive, or take a geek of higher powers to make sense of them.

Instead, thanks to a raft of new smart consumer products, users are increasingly taking a small pieces, loosely joined approach. It’s the joining up part that Airfy is tackling.

“Imagine waking up in the morning, grabbing your smartphone and it automatically turning on the lights in your bedroom. Or while you freshen up in the bathroom, your phone telling your coffee machine to start brewing in the kitchen and your radio to play your favorite song in the dining room,” reads Airfy’s Kickstarter campaign, painting a world that only Bill Gates has likely been living in, but most of us, until now, could only dream of.

Other examples cited include turning off your smart TV when you leave the room, or triggering custom lighting setups for your Philips Hue WiFi lightbulbs. 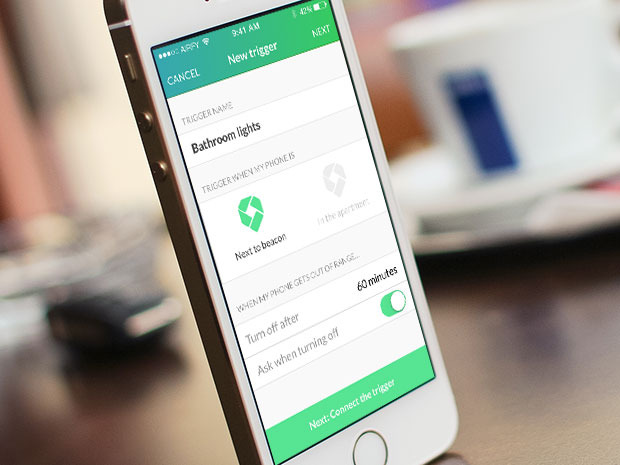 Specifically, the Airfy Beacons and accompanying Airfy app can be used to program the behavior of your various smart devices based on your proximity, the time of day, and, potentially, the number of people in your home. This of course also relies on each disparate smart device having an open API that Airfy supports, or the use of and support for IFTTT, the smart device ‘recipe’ service. The other drawback of using Beacons as a way of triggering various events in the home is that it relies on having your phone on your person at all times. Or until/if Airfy launches a smartwatch app.

Regardless of those potential shortcomings, here’s how Steffen Siewert, CEO and co-founder of Airfy, described to me the problem the German startup has set out to solve:

With Philips Hue, Nest Thermostat & Co. more and more smart home elements become available to personalize your home. As of now, unfortunately the available controlling is still very basic and doesn’t allow consumers to tap the full potential of this smart technology. In addition, for a really individual smart home people have to pay a small fortune at the moment. With our Beacon technology we want to change that, giving consumers the opportunity to create their very own smart home satisfying their individual needs and wishes and at the same time making this possibility affordable for everyone.

Pricing-wise, each Airfy Beacon, which follow a similar design cue as the startup’s WiFi router, starts from $49 each for early Kickstarter backers. There’s also more expensive starter kits that also include a number of Philip Hue lightbulbs and base station, along with various other perks. Head over to the campaign page for more details.