Mary Elizabeth Phillips, the 98-year-old woman who has been at the heart of San Francisco’s ongoing anti-eviction and tech protests, still faces an uncertain future.

After living just a few blocks from Dolores Park for a half-century in the Mission District, the epicenter of the city’s tech gentrification and Google Bus wars, she has been fighting an ongoing eviction battle for more than a year.

“Young lady, I’m 98 years old,” she told me when I visited over the weekend. “I’m in fair shape for an old lady of my vintage, but I’m not going anywhere. They’ll have to take me out of here feet first.”

Phillips doesn’t have children, so it’s not clear where she would go after living in San Francisco since 1937. And if the other remaining tenant, public school teacher Sarah Brant, is evicted, Phillips will basically be left alone inside an otherwise empty building. All the other residents have either been evicted or bought out.

Her story became a rallying cry for activists, who say a tech-fueled economic boom is fueling rent increases and evictions across the city. In particular, they focused on a legal loophole from a two decade-old law called the Ellis Act.

That law was explicitly created to give property owners the leeway to go out of business as landlords. But instead, anti-eviction activists pointed out that certain landlords were abusing the Ellis Act, to do no-fault evictions of longstanding tenants and then resell the empty individual units as tenancies-in-common. (I mentioned Phillips’ case in a long story on the housing crisis back in April, so this is an update on her situation.)

A very broad coalition of activists, policy makers and the tech community came together to change the Ellis Act at the state level. State Senator Mark Leno introduced a bill that would have required property buyers to own a building for at least five years before they could invoke the law. (Phillips’ landlord Urban Green had owned her building for less than a year before it started eviction proceedings against the tenants in the building.)

In an urgent push to get the bill passed, Phillips and Mayor Ed Lee testified in Sacramento, while longtime angel investor Ron Conway also asked tech companies to write in letters of support for the act.

But the effort failed three weeks ago.

Leno couldn’t secure a couple of key votes from Southern California representatives in time. The real estate lobby was simply too powerful.

So Phillips’ fate is still in doubt. 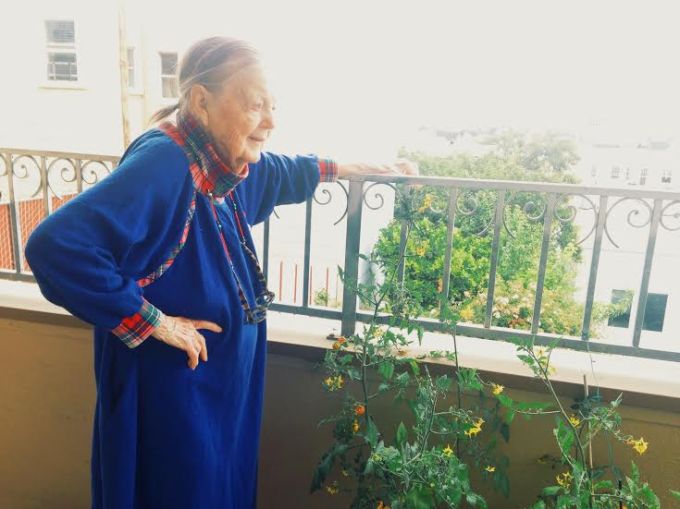 Last Friday, Business Insider and a few other publications reported that her landlord Urban Green Investments, was going to allow her to stay for free through the end of her life.

“Urban Green Investments and 55 Dolores Street, LLC have offered Mary Phillips the opportunity to remain in her home for the rest of her life with no cost to Mary. This offer was first communicated to Ms. Phillips’ lawyer in March 2014, and has been the topic of negotiation ever since then.”

(Urban Green has not replied to any of my requests for comment, and Phillips hadn’t heard of the offer when I talked to her on Saturday.)

The issue is that even if she is allowed to stay, she’ll be alone. While the rest of the building has been emptied out, there is one other tenant still there. It’s a friend and public school teacher at Balboa High named Sarah Brant, who sometimes helps out with Phillips’ needs and has lived in the building since 1998.

While Phillips’ case was filed, it was not served.

In contrast, Brant’s case is being actively litigated.

“It’s an illusory offer,” said Joseph Barber, who has been working on the case through the non-profit Tenderloin Housing Clinic. “It’s not really feasible for her to continue living there without Sarah.”

I’ve followed the case for the last few months. When I spoke to Brant’s lawyer back in April, the clinic was actively working on a half-dozen other cases involving Urban Green. At the time, Urban Green was also in the process of evicting a severely disabled Chinese-American woman and her son nearby.

“This is their business practice. This is their modus operandi. They purchase buildings with senior and disabled tenants and serve them with eviction notices,” said Tenderloin Housing Clinic attorney Matt McFarland back in April. “This is not even an isolated event.”

Brant, who can no longer speak to the press because she is in active litigation, told me back in April:

“It’s heart-breaking. Our dominant culture in the United States doesn’t show a lot of love to elders. Elders can really be isolated,” she said. “Mary wakes up every morning. She knows where she is. She knows where her things are. She has 50 years worth of memories and pictures here.”

Aside from the costs of legal representation, the filing fees alone are more than Brant earns in a single month as a public school teacher (and you can see what San Francisco teachers make here).

McFarland estimated back in April that Brant would be facing at least $6,500 in legal costs, although that figure is higher now. The clinic didn’t have a hard figure when I spoke to them today. There is a crowdfunding campaign from the Anti-Eviction Mapping Project to cover their legal fees here. Anything extra raised will go toward legal defenses for senior tenants.

Phillips moved to San Francisco in 1937, when her first husband was in the Navy. She worked as an accountant and moved into the building at least 50 years ago. She remembers going to dance at the Fairmont, and sunbathing in an open field nearby.

“I feel that I’ve lived a good life,” she said. She was married and widowed three times. “All happy,” she added.

Before Urban Green evicted all the other tenants aside from Brant and Phillips, there were several other families living there. There was a couple who worked in a restaurant and their baby, a special education teacher, a nurse at San Francisco’s General Hospital and their partner.

“Everyone was really happy living in our building,” Brant told me back in April. “We got along really well.” The toddler would go and watch TV with Phillips at night.

But in the last few months as the building has fallen into disrepair, homeless people have clambered in from the construction site next door to sleep in the building’s walkways. They were cleared out in the last week or two. There’s also been one break-in.

“Most of my friends are all gone,” Phillips said, flipping through an album on her coffee table full of photos of old friends who had long passed away. “Thank God Sarah is still here.”