Kickstarter has been around long enough that the Kickstarter double-dip is now a well-established thing – basically it’s the practice of a company returning to the crowdfunding well to secure the resources for a new product launch.

The original Vaavud was a wind meter that required no power and plugged into your smartphone’s 3.5mm stereo input jack, but that actually transmitted information to the device via high-frequency sound waves. The new Vaavud generation 2 does the same, but in addition to giving you wind speed, it can also provide wind direction.

This time, there’s an optical sensor involved that can detect tiny variations in rotation and take samples 40,000 times per second. Using this with some fancy math, it can accurately detect wind direction according to the company’s founders.

The working prototype is a bit bulky, but the company plans to shrink things down in time for shipping, and, given its success in delivering a similar product in the past nearly on time and on spec, it should have no problem doing so. It’ll work with the existing Vaavud companion software available for iOS and Android, as long as you’ve got iOS 7 or above or Android 4.0 or higher, and it’s compatible with most modern devices operating on either platform.

Backers can secure a new Vaavud unity for an initial pledge of just £20 for now, which is around 40 percent cheaper than the anticipated retail price once it launches fully. 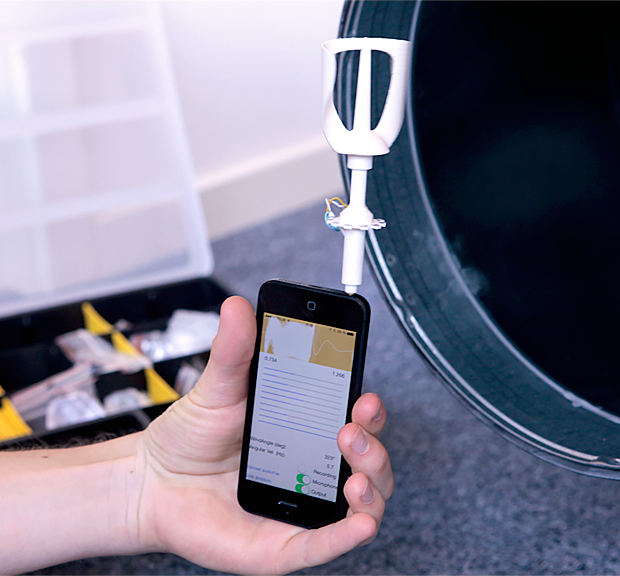 Thomas Helms, co-founder and CEO of Vaavud, said that aside from launching this new hardware effort, the company is also doing a lot on the software side behind the scenes, and plans to launch a lot more features in its app soon.

“In Q4 we will launch a subscription solution for agriculture, to help farmers meet the increasingly tough EU regulation around pesticide use, which requires them to document the wind conditions before they spray their crops,” Helms said via email. “Furthermore, we will build out the basic app so it also includes other environmental data, like barometric pressure, fetched from the sensors that are already built into the Galaxy S4 and S5 for example, and rumoured to be in the new iPhone as well.”

Other plans for the software include adding notifications and other top-requested features, which could become part of a premium package for average users. Another revenue source in the pipeline at Vaavud is a subscription plan targeted specifically at sailors, which is targeting a Q2 launch in 2015.