Microsoft CEO Satya Nadella released a letter to employees today via the Microsoft website, and while the missive is aimed at employees in terms of syntax, it’s clearly designed to address the public, too.

The occasion for the letter is the kick-off of Microsoft’s fiscal 2015, ahead of the final results for FY 2014, which drop July 22. The subject matter is a call to action, combined with a warning that Microsoft is about to enter a period of significant organizational change.

Nadella closes with more detail on the changes required, which include reorganization and streamlining. He evokes the image of a leaner, more agile Microsoft, which can anticipate and innovate more quickly. That’ll mean a flatter organization, he says in the letter, and already he’s asked the Microsoft leadership team to submit its ideas on how they can “simplify their operations and how they work.” The goal of the change is to make sure Microsoft focuses on and delivers to its users and customers what Nadella calls its “core.”

“At our core, Microsoft is the productivity and platform company for the mobile-first and cloud-first world,” he writes. “We will reinvent productivity to empower every person and every organization on the planet to do more and achieve more.” 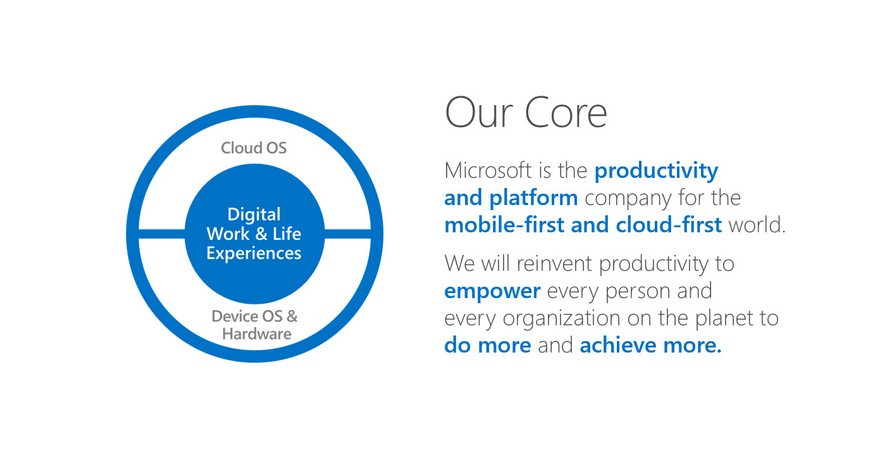 Essentially, this is a refinement (or a romanticization?) of the “devices and services” identity for Microsoft that Nadella espoused when he took the reins. This means that Microsoft will “reinvent productivity for people who are swimming in a growing sea of devices, apps, data and social networks.”

But the most interesting bit is the sample case of how exactly the company might actually go about making that happen. Here’s the CEO’s description of the future of Cortana, the Siri of Windows Phone:

[T]oday the Cortana app on my Windows Phone merges data from highway sensors and my own calendar and simply reminds me to leave work to make it to my daughter’s recital on time. In the future, it will be even more intelligent as a personal assistant who takes notes, books meetings and understands if my question about the weather is to determine my clothes for the day or is intended to start a complex task like booking a family vacation. Microsoft experiences will be unique as they will reason over information from work and life and keep a user in control of their privacy.

This is, of course, the direction in which all the major tech companies are heading, but Nadella clearly thinks that Microsoft has unique perspective and advantages when it comes to making our devices and services more intelligent and anticipatory.

Nadella also takes time out to address areas of Microsoft’s business that some have suggested might not fit in with the new, lean and more focused company identity.

Xbox has been rumored as a possible LOB for Nadella to spin out, but he says in this letter that isn’t happening, citing specifically the potential for Xbox on mobile as one of the main reasons why.

“The single biggest digital life category, measured in both time and money spent, in a mobile-first world is gaming,” he says in the letter. “We are fortunate to have Xbox in our family to go after this opportunity with unique and bold innovation.”

Finally, he actually quotes poet Rainer Maria Rilke, which is basically the most un-Steve Ballmer thing a Microsoft CEO could do. The quote is meant to illustrate the kinds of changes Microsoft should prepare for, and it comes off as both inspiring and slightly terrifying.

“Rainer Maria Rilke’s words say it best: ‘The future enters into us, in order to transform itself in us, long before it happens.'”

Nadella definitely wants to paint his reign at Microsoft as a time of change, and thus far we’ve already seen him begin to make that happen. This year sounds like it could provide even more of a shake-up at one of the computing industry’s oldest and most influential institutions — if the new CEO sticks to his plans.