I’ve never driven a BMW, or an electric car, so I might have been an odd choice to test drive the new BMW i3, the German car maker’s all-electric hatchback, which packs the equivalent of 170 HP into its electric engine. But an unexpected reviewer might be the perfect candidate for an unexpected car.

The car, which was on limited display at CES back in January, is on sale as of May in the U.S. and should go on sale shortly in Canada. The version I drove features an optional range extender which adds around 90km of fuel-powered driving via a backup 650cc motor, but the base trim features only the electric motor, with an eight-module battery located along the length of the floor that delivers a maximum of 160km in normal mode, or up to 200km in Eco Pro or Eco Pro+ energy conservation modes. 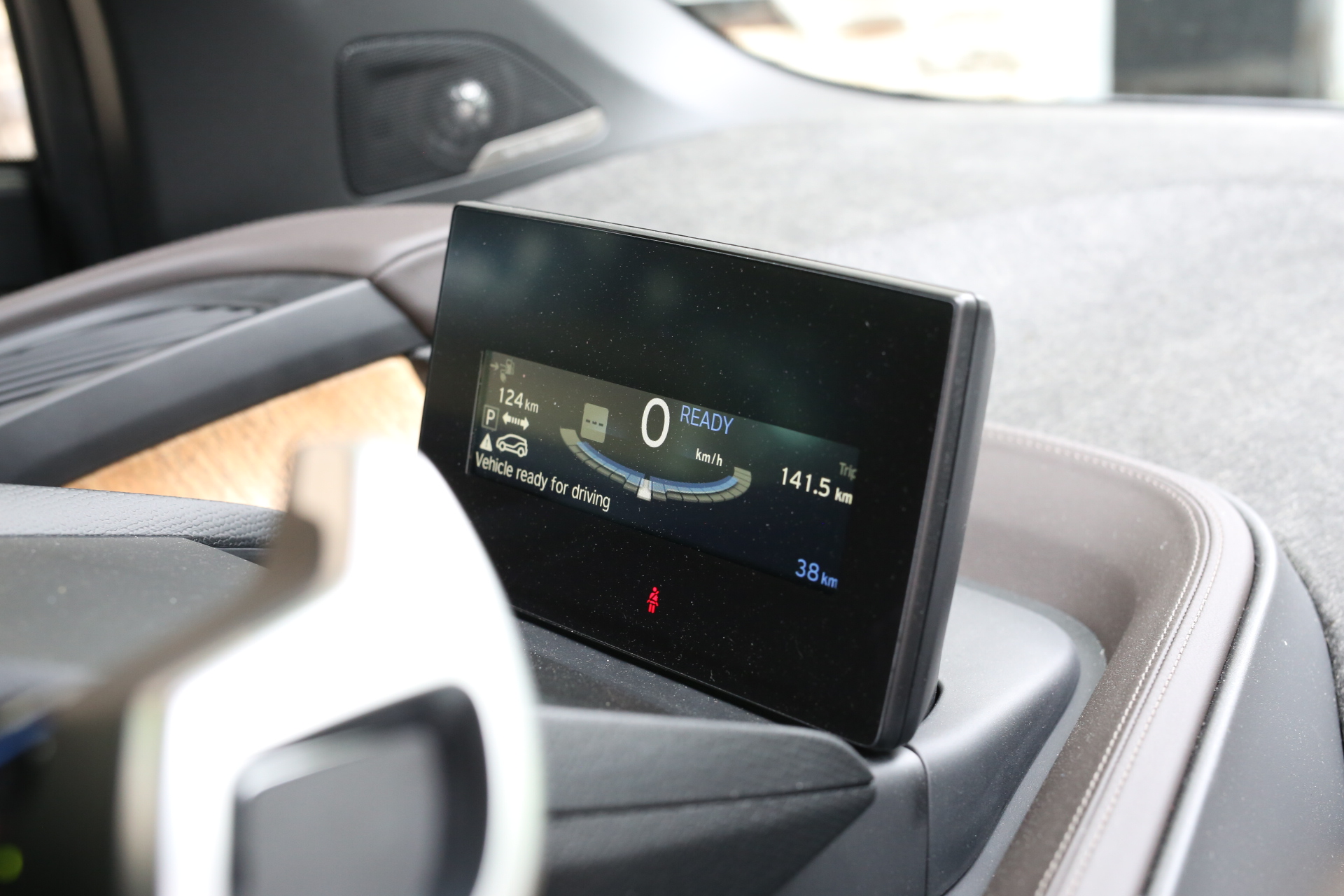 While BMW had the technical ability to make a car with a 400km range, like those offered by some of its competitors, the company tells me that it wanted to emphasize the driving experience first, rather than squeeze every last little bit of range out of the battery. The result is an engine that doesn’t feel like what you’d expect from an electric car: the i3 can jump from 0 to 60km/h in under four seconds, and leaps to 100km/h in just over 7. Plus, it doesn’t shift like traditional engines, and gives you the full torque of the engine right from the get-go.

The work focused on delivering a premium driving experience really shows – the i3 has a whole lot of pep, with acceleration that will get your blood pumping and actually let you feel the Gs a bit on launch. On the highway, acceleration feels fast and powerful, but passengers claimed to not have even noticed we were going so fast before looking at the speedometer. Handling is tight and tuned as well, and the only time you’ll really remember that you’re in an electric car at all is when you let off the ‘gas’ and you feel the car slow quickly as if you’re braking, because it is.

BMW has included regenerative braking in the i3, so that it immediately begins to recoup charge the moment you take your foot off the accelerator. It takes a little getting used to, but the regenerative braking eventually feels almost better than the usual coasting system, since you don’t have to hammer on the brakes all the time to decelerate the vehicle. Plus, it’s fun hitting a hill and watching the range tick back up rather than go the other way.

Other cool features on the i3 include Park Assistant, which lets you parallel park simply by lining up next to a spot and holding a single button down for the duration of the maneuver, which the car handles on its own, as well as the intelligent cruise control, which will slow down and speed up (to your set maximum) depending on the speed of the car in front of you, to a trailing length you set with the in-car system, too. For this futuristic ride, these automated controls feel only natural, but they’re magic if you’ve never come across them before.

Inside, the BMW i3 is a curious mix of material, all designed to match the tastes of the car’s presumably eco-loving owner. There’s molded paneling created from a relative of the marijuana plant, bamboo wood in the dashboard, and leather tanned with the leftover grapes from the wine making process covering the seats. The entire passenger frame is made of carbon fiber, which offers up weight savings, and the suicide doors remove the need for center columns, saving more precious pounds. All of this benefits efficiency, giving the engine max power and range.

The exterior is made of lightweight polycarbonate panels, which have an eye-catching design. I was a big fan of the look, but others weren’t so sure. Overall, though, it either attracted high praise or only moderate disdain, and it’s definitely designed first and foremost to make an impression. Storage space via the rear hatch was adequate, but don’t look to this car as a major cargo hauler. It’s designed for city jaunts and has enough room for that, with a surprisingly spacious back seat for its size. 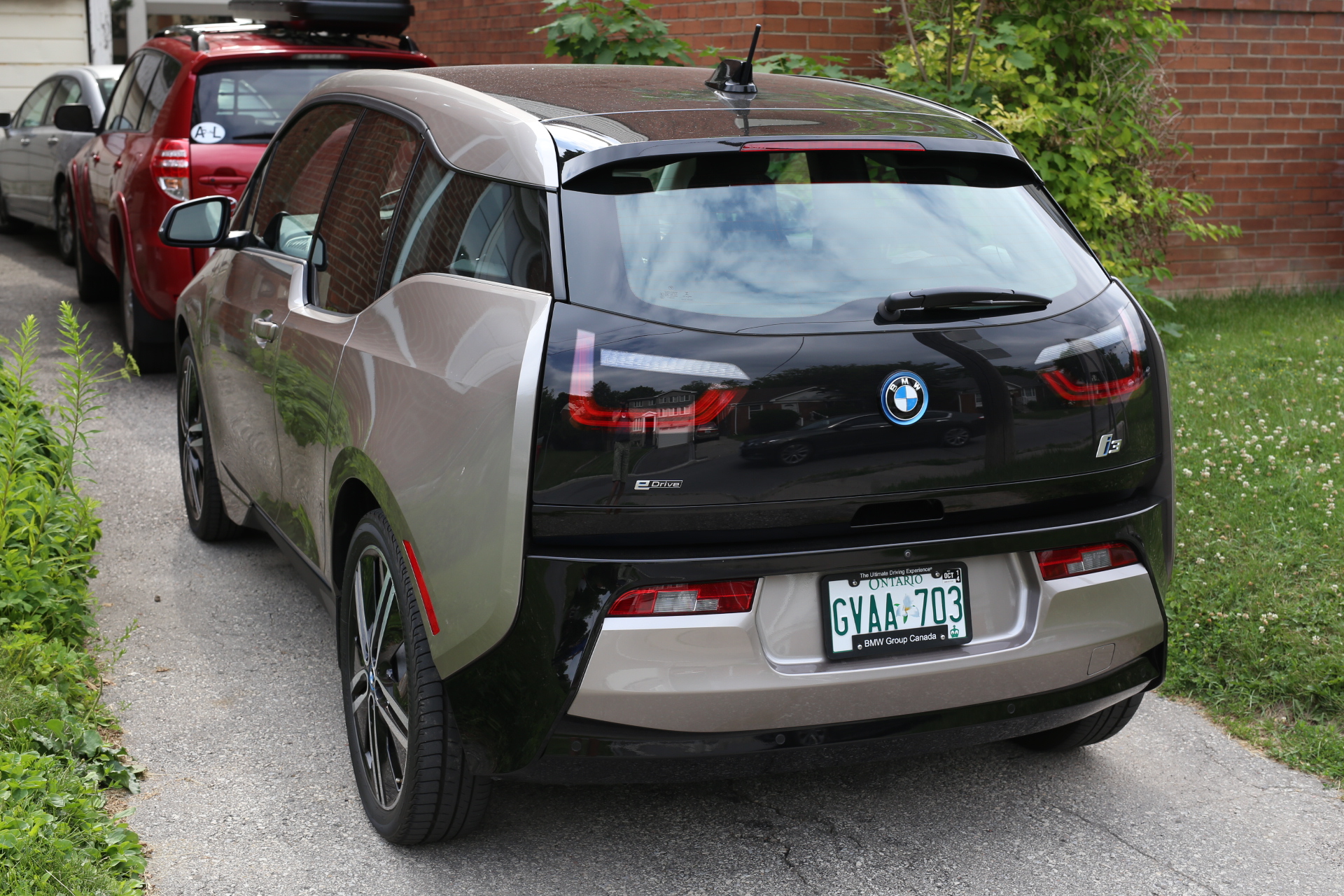 Driving an i3 is an interesting experience, one that takes some getting used to and that initially has you paranoid about your remaining charge and where you can get your next fix. BMW includes software that displays the nearest charging locations (most of which are free) on a map, either in-car or on your app, but I found myself mostly plugging into friends’ and family’s houses while visiting instead. Charging from a regular outlet is slower (12 hours vs. 4 or so at a dedicated charging point) but it’s also more convenient, and you can usually top up a decent amount during a fair-sized visit.

BMW knows people are thinking about range when they drive an electric vehicle, so there’s an upgrade feature that provides you with a “spider” diagram on a map, showing your max range, either in normal mode or in Eco Pro+. It’s one-way only, but it’s still better than having no clue where you might lose charge. The spider map mostly made me aware that I could never own an i3 as my sole vehicle – the main reason I have a car is to get out of the city to surrounding destinations up to (and sometimes beyond) 400km away, not to travel within it.

The i3 is perfect for those whose whole lives take place in a single urban environment, however, or for those who want a commuter car to complement another vehicle. It’s fun to drive, compact enough to park most places and yet spacious inside, packs plenty of entertainment options and ecologically friendly.

And at around $44,000 to start, it’s not too much more expensive than the Nissan Leaf or Chevy Volt, but it comes with the BMW pedigree and attention to quality. The Tesla S exceeds the i3 in terms of performance and range, but it’s about $25,000 more expensive to start, too. 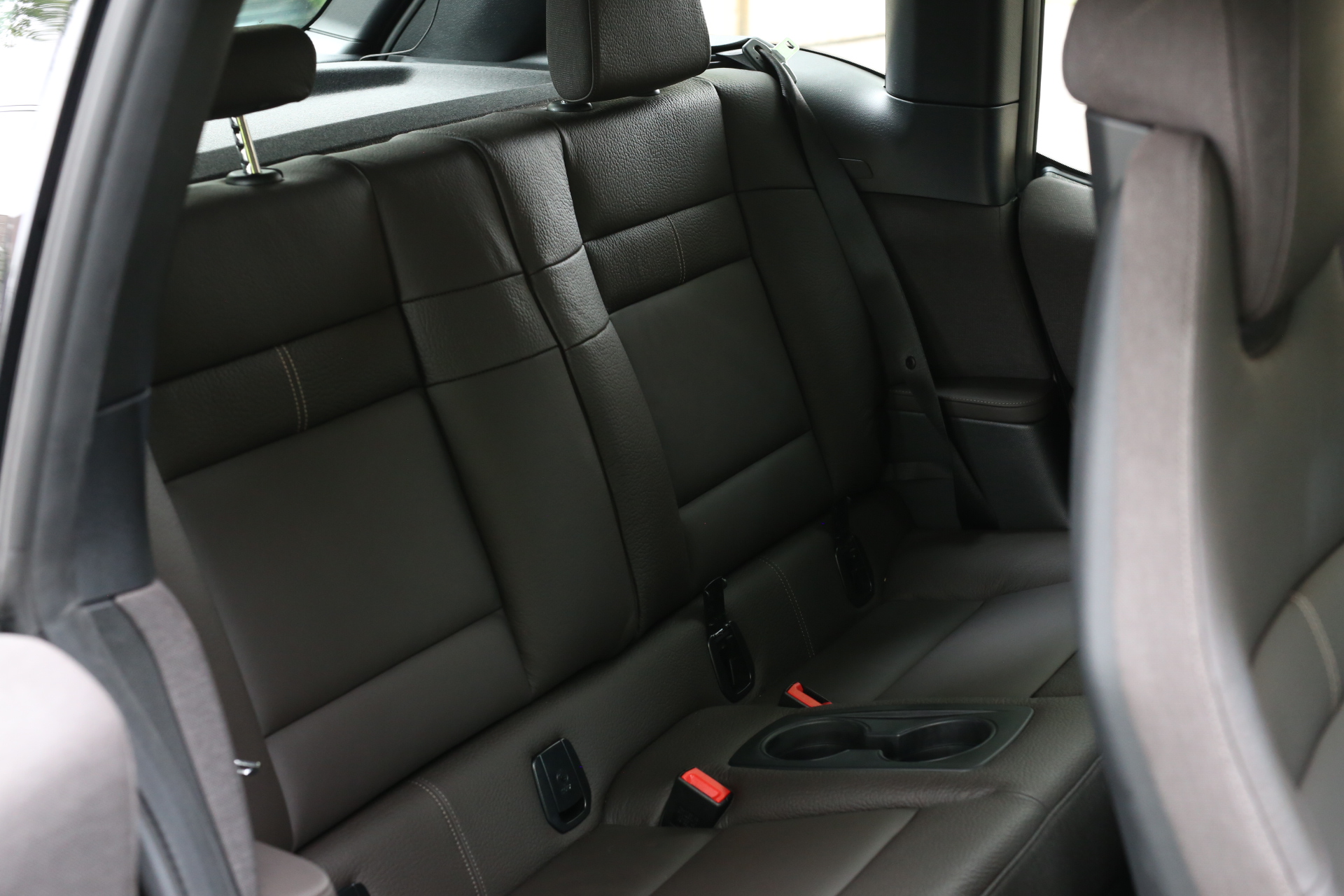 BMW tells me it’s also designed for longevity – the battery should last 10 years with at least a 70 percent charge capability remaining, and the modular design means individual pieces of it can be swapped out affordably in case of malfunction. There’s no reason the car itself shouldn’t last 20 years or more, also, and its design means it could easily find second life as a taxi or livery vehicle with a simple battery swap after its initial consumer service.

Electric cars are still in a nascent phase, despite having been around for a long time now, but BMW’s i3 feels like a car mature in both design and execution. It isn’t without its trade-offs, to be sure, but for the right driver, this is the perfect car, electric or otherwise.