In the wake of the Facebook acquisition of Oculus VR, and the launch of Sony’s Project Morpheus a week earlier, virtual reality has quickly moved beyond its gaming roots and has seized the imagination of a generation of designers, entrepreneurs and technologists.

Now you can add award-winning storytellers to the list, with the launch of a new entertainment studio from London called Alchemy VR, dedicated to creating new content in virtual reality for both the Rift and Morpheus.

The studio is the brainchild of Atlantic Productions, an Emmy- and BAFTA-winning English production company responsible for a number of documentary and educational programs, and its Emmy-award-winning visual effects and animation studio ZOO.

“VR has been around for us for about 15 years,” says Anthony Geffen, the chief executive officer and creative director of Atlantic. Back then, Geffen and Atlantic were working with Michael Deering at Sun Microsystems on developing a virtual chariot ride.

“About a year ago when we started seeing the things that Oculus and other people were coming up with,” Geffen says he realized, “the technology had arrived to allow us to move on to a very exciting, new, digital frontier.”

The company has a history of embracing new technologies in the service of telling its non-fiction, educational stories — as does its frequent, and celebrated, collaborator Sir David Attenborough.

A longtime BBC celebrity, and one of the world’s most famous naturalists, Attenborough has collaborated on projects with Geffen and his team at Atlantic for the past six years, after leaving the BBC to work independently.

For the company’s first virtual reality project, Alchemy is collaborating with Attenborough on a guided tour for a look at Earth’s earliest inhabitants in a world entirely created from computer-generated imagery. 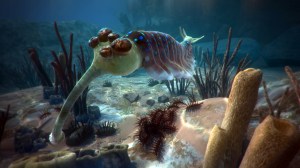 Opabinia, 5 eyes and a trunk, is a 450 million year old creature from David Attenborough’s VR journey.

Filmmakers like Geffen and his team say the new frontiers opening up through Oculus are like the ways in which movies evolved from the kinetoscope — or the evolution from silent films to talkies.

However, the new technology breeds questions on how best to develop a narrative, given the immersive quality of virtual reality as a medium. “How to sort that problem is the most interesting question,” says Phil Harper, Alchemy VR’s creative director. “We looked at a first-person narrative [and] there’s definitely room in that direction. We’ve also experimented with if someone could guide you through a story and capture everything in the feed… You can feel like you’re really with someone.”

Ultimately, that’s the form for the first project with Attenborough, a guided tour by one of the world’s foremost naturalists among the habitats of the first creatures alive on the planet. “Rather than viewing a story on the feed, in a sense, the viewer becomes part of the story,” says Harper.

The decision to create content in a computer-generated environment first, gave the company more control over what a viewer could see, according to James Prosser. The work also leans heavily on existing content libraries that the studio had developed for some of its three-dimensional work.

Alchemy VR’s work with Attenborough is the first of several virtual reality projects that the company is cooking. Geffen says the company has plans to bring even more educational content online. The company has already worked with the University of Arkansas to scan some of the wonders of the ancient world.

“We have some very large scale Attenborough and non-Attenborough projects and we’re looking to add VR components to [them]. And combining them with all these different digital platforms is very exciting and you can monetize the content in a different way,” Geffen says. “We’re bringing back whole chunks of the ancient world to explore… Imagine you could go to the Great Pyramid and interact with it.” 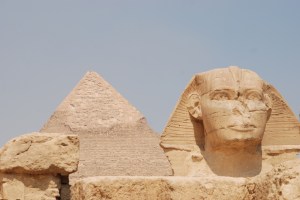 These possibilities are only the beginning of what virtual reality can do, according to the Alchemy VR team.

“Once a project goes live, it’s not the end,” says Harper. “You can update these projects with different features, which is something that has never happened in film…. Instead of sequels, there’s just updates.”

Behind all of the opportunity is the breakneck speed at which technologists are bringing new virtual reality technologies to the market, and an acknowledgement that without good content all of the development could be wasted.

“We’re talking about a massive revolution in storytelling and in content,” says Harper. “It’s going to happen very quickly — in two or three years.”

Visual media privileges storytelling, according to Geffen and for this new generation of virtual reality to really take off, it has to have great content. “The world wants to go on a journey in VR,” he says. And Alchemy VR is creating the means to take the trip.