In May, Buffer — the app that competes against the likes of SocialFlow and HootSuite as a way for individuals and businesses to schedule and share things on social networks — added a new content suggestion feature to its service, so that when users didn’t have something of their own to spread around, they could get ideas from elsewhere to keep the networking wheels turning.

Today, the company is unveiling the next stage that strategy, a new app called Daily, which provides a stream of headlines and links for users to either share across Twitter, Facebook,  LinkedIn and Google+, or dismiss forever.

The free app is launching initially on iOS only, and will sit alongside Buffer’s main service, a ‘freemium’ product that offers both a free and paid tier (called “Awesome”, priced at $102/year) for individuals, and higher rates for businesses, where you can schedule and post stories across your different social media accounts.

Daily borrows concepts from a couple of other places that will be familiar to people who keep up with other apps. The most prominent of these are the left and right swiping motions. Swipe right to queue up a post. Swipe left to dismiss it. “Tinder for content” is how Buffer says its beta testers are describing it, and how it’s also marketing itself: 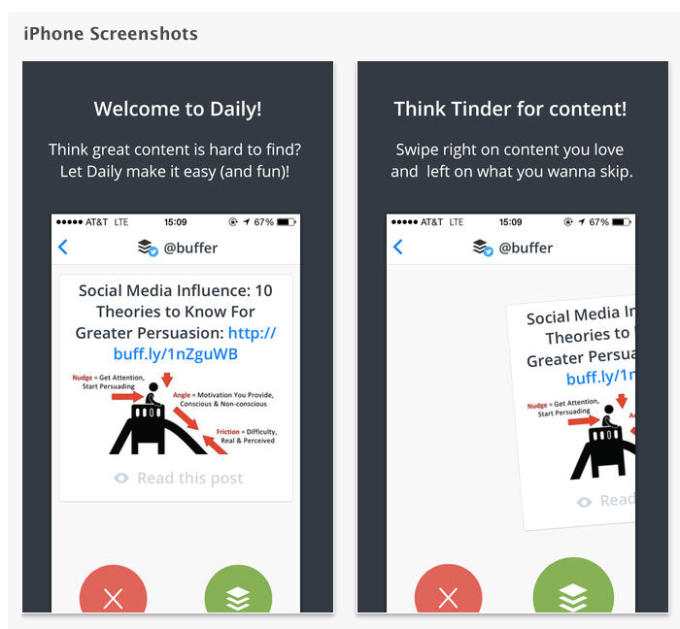 The other app that Daily brings to mind, for me at least, is Jelly, the social Q&A service recently debuted by Twitter co-founder Biz Stone. Jelly’s service is based on the idea of an endless stream of questions posed by your friends and friends of friends. These feed into your stream in the form of cards to be actioned (in Jelly’s case, answered) or swiped away, never to be seen again.

Although services like Twitter have been built on the idea of a real-time ticker of information — and indeed the very existence of Buffer is meant to help push the rush of that river along — there is another school of thought that says we can take in more when we see one thing at at a time.

Buffer’s news stream is designed to somehow drop into the middle of those two extremes — something that is quick and easy to shuffle through, but with an interface that lets you linger for longer if you so choose. You can also use it simply to browse and read content for yourself, and in that regard you can think of it as a slightly more socially focused version of any other number of mobile-first news readers.

Buffer says that it curates the content on the app itself, and it’s confirmed to me that it’s working on an algorithm to help that along. For now, Buffer offers a selection of topics geared to the kinds of topics that are most shared by its current users: Marketing, Inspiration, Business and Startups, Lifehacking, Design and “Buffer picks.”

To be honest, that list is not really my personal cup of tea when it comes to the kind of content I personally like to read and/or share, so it will be interesting to see whether Buffer decides to expand that list to other kinds of subjects over time to court other kinds of users, for example in tech, or cooking, or sports.

What Daily’s launch does show is that the company has put together a very efficient platform for doing so, if it chooses.

Leonhard Widrich, the co-founder of Buffer, tells me that since it launched the first version of content suggestions in May, some 500,000-600,000 of them get added and shared over Buffer each month by its users. It was this that encouraged the company to push this idea further with the development of a content-discovery mobile app.

“We realized that there’s a huge opportunity here to build out something that spreads a lot further still and helps users discover great content,” he says.

The other thing that drove the creation of Daily was that today there still aren’t that many great ways to share content from mobile devices.

“It is still oftentimes very clunky, takes a long time and is very disjointed within news reading apps. There’re a lot of great apps that do a great job on the ‘reading content’ side of things,” he says. “[But] seamlessly sharing great stories you find, especially in a way that doesn’t overwhelm your followers, is very tough.”