A small group of pro-net neutrality activists who had set up a protest outside Google’s Mountain View HQ — dubbing themselves OccupyGoogle — appear to have been arrested by California police.

Tweets using the #OccupyGoogle Twitter hashtag suggest around a dozen activists have been arrested for trespassing on private property. Update: OccupyGoogle told TechCrunch that 10 people were arrested at the protest. Their court dates have been set for August 8.

The ustream video below appears to show the arrest of a person who had been documenting police arresting activists — before apparently being arrested himself:

People being arrested for remaining on private property without permission isn’t exactly news but the scale of the police action against what looked to have been a pretty low-key protest — that wasn’t really taking aim at Google the corporate entity itself — does seem somewhat disproportionate.

Earlier in the day the activists had pitched tents and put up pro-net neutrality banners outside Google’s HQ. There was even a dude with a guitar… 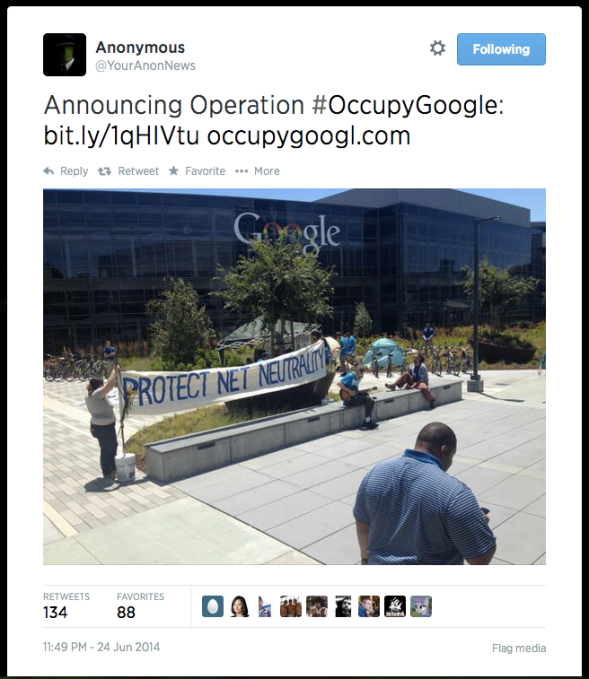 They also set up a website calling on Google to help defend Internet freedoms and protect net neutrality by throwing its weight behind a public campaign to lobby the FCC during a period of public comment, which ends July 15.

At issue is a U.S. Court of Appeals ruling in January which overturned the FCC’s Open Internet Order — giving ISPs such as Verizon, Comcast and AT&T the ability to throttle web services based on how much they are paying for connectivity. (Aka: “cable company fuckery”, to quote John Oliver.)

A multi-speed Internet with slow lanes for the masses and fast lanes for those with the most money to pay ISPs might not cause too many sleepless nights if your pockets are as larded with gold as Google’s are. But it obviously puts startups at a clear disadvantage since they lack the huge resources of incumbent Internet giants.

It also means the Internet is no longer a level playing field — being as it tilts the economics of digital services in favour of established entities (like, it must be said, Google).

Now Google has generally been a strong advocate of net neutrality but the OccupyGoogle protestors argue the company could be doing more to champion the cause at this critical moment — hence their occupation of Mountain View HQ.

They are calling for, among other things, Google to black out its homepage for a day and link to the FCC petition, and to add a shortcut button to the petition to its website.

Today, the internet is once again under attack, this time by ISP’s who wish to capitalize on content providers and eliminate net neutrality. Though Google and other major companies such as Netflix, Amazon and Microsoft have come out in support of preserving a free and open web, we believe much more can be done.

Though many of us have concerns about the larger implications of Google’s effect on the world, as far as surveillance and ties to military technology, we are not here to protest Google.

Google, with its immense power, has a social responsibility to uphold the values of the internet. We encourage Google to engage in a serious, honest dialogue on the issue of net neutrality and to stand with us in support of an internet that is free from censorship, discrimination, and access fees.

Google declined to comment on the arrests when contacted by TechCrunch.

It also did not comment when asked whether it had asked for police to move in and remove the protestors.

Google’s I/O 2014 developer conference kicks off this morning. A different set of directly anti-Google protests are planned for I/O, taking aim at the economic impact of the tech industry on San Francisco.