Photo-sharing service EyeEm announced today that it is partnering with Uber to offer free rides to its users. The startup has given out a promo code on its blog worth $20 on Uber, and the two companies are running a joint competition where users can win more credit by documenting their rides in pictures.

The competition is one of EyeEm’s “Missions,” where members of the community can submit photos around certain areas or topics (like the World Cup or photos of people in love) in exchange for prizes. Participating in the Mission is easy: Simply take a photo of an Uber ride or the destination it brought you to and tag with with “Capture the Ride with Uber.”

EyeEm users on Android will also notice that it’s significantly easier to navigate to Missions in the app starting today, thanks to a new update that just went up on the Google Play Store. 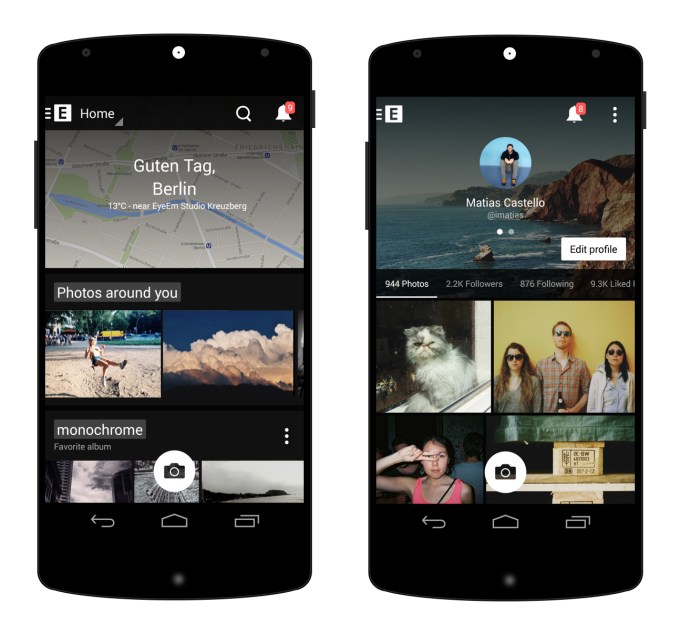 The new Android app brings feature and performance parity with the iOS app, as well as a few new nifty features that make the photo-browsing experience faster and more pleasant. Along with making certain key features like Missions more prevalent in the interface, the new app introduces a less-cluttered feed of photos and lets you tap a photo to quickly zoom in on a particular point while the rest of the high-resolution image downloads.

These should come as welcome improvements to EyeEm’s Android users, who make up approximately half of the service’s 10 million photographers. Before this latest update, iOS users were posting nearly twice as much as their Android counterparts on the service. With the apps now delivering similar experiences, that ratio should start to line up more with installation numbers.