Samsung has never made a tablet that truly got my blood pumping, but that might’ve just changed. I bought an original Galaxy Tab when it was first released, only to find the experience frustrating and return it a few days later because of a dropped Wi-Fi issue. Now, Samsung has a new line of tablets called the Galaxy Tab S, and though there have been many different Samsung slates between then and now, these represent the biggest changes to date, and put an entirely new face on Samsung’s flagship tablet devices.

Samsung has produced a tablet that’s deserving of lots of praise with the Tab S when it comes to design – and an almost equal amount of scorn. These slates look an awful lot like every other device Samsung has put out this year and late in 2013, including the Galaxy Note 3 and Galaxy S5, with a metal-look band surrounding the entire device, and a faux-leather back panel that feels nice in the hand. The size and weight are amazing, as these are incredibly thin and light devices given their impressive screens and internals, but they also clearly aren’t designed to appeal to my particular demographic.

There’s a gold tint on that metallic border I mentioned, and the back in both white pearl and “titanium bronze” look has a strange silken sheen to it that’s a little flashy for my tastes. Both types of cover, including the full front-and-back Book Cover and the lightweight front cover come in similar shiny finishes, delivering an appearance overall that would be quite at home with bedazzled garments but that could never be called austere or simple, both adjectives I like to be able to use when describing my electronics.

The snaps included in the back of the Tab S to affix the covers do work wonderfully and keep things ultra secure, however, and the finishes are such that the tablets don’t feel like they’re going to easily slip out of your grasp. The side facing speakers naturally project sound forward when you’re hold thing the devices with two hands to watch movies, too. Button placement on the 10.2 puts the sleep/wake switch at the top left, which is not ideal, but otherwise these are ergonomically pleasing and well-built, questionable aesthetics aside.

The Tab S devices both perform very well, considering how much power they have to put out to make sure those displays are looking their best. The processor provides ample muscle to power HD video, including video captured in 2560 x 1440 resolution at 30 fps. There’s a sample video included on the tablet that shows just how awesome stuff looks at this resolution on this screen, and some cameras will capture at that resolution (though the Tab’s built-in 8 megapixel camera doesn’t).

In general browsing and other OS performance I found the Tab S to be mostly solid, but there were some times where the homescreen stuttered when paging through. Running apps in split screen proved no problem, however, which is one of Samsung’s key tablet signature features. Photos from the 8 megapixel camera aren’t amazing, but they’re more than tolerable if the Tab S is the only camera you have on you. If you’re using a 10.2-inch device as a camera you have other problems to worry about.

Some of the highlight features on this tablet include the split-screen app multitasking, which again works as advertised, and Samsung SideSync feature. SideSync is pretty great, letting you see your screen exactly as it appears on your Galaxy S5, Note 3, S4 and S5, and letting you send and receive voice calls on the Tab S from your S5. Pairing is a cinch, and it worked well during my tests, making for a useful tool if your phone is downstairs or across the room.

Another feature new to the Galaxy Tab S is the Adaptive Display, which is designed to make the most of the SuperAMOLED screen included in the tablets. The screen really is the highlight here, and the adaptive mode works like it does on some modern TVs, changing things like color rendering and contrast depending on what kind of content you’re viewing. In practice, it really does seem to help with the experience of watching movies, playing games and more.

The fingerprint scanner from the GS5 makes an appearance in these tablets, and works as it did in that smartphone, which is to say well and reliably, but with a little bit of futzing required to get the positioning right when you’re performing a swipe. On a tablet, it honestly doesn’t seem all that appealing as a feature, but the payment authorization through PayPal is still here and still impressive. 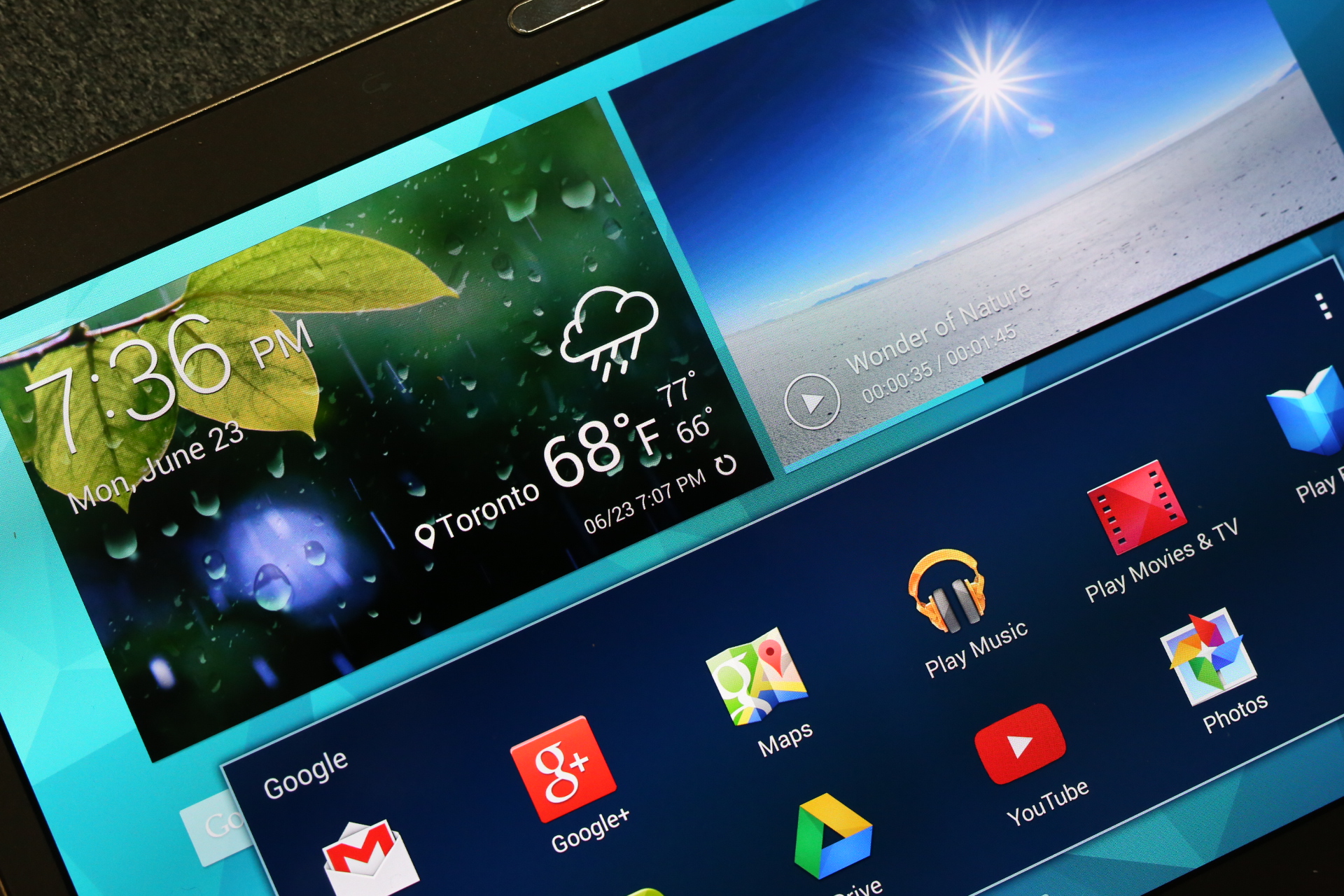 As just mentioned, the display is the star here. Samsung has indeed nailed the tablet screen  – both look terrific, and you’d be hard-pressed to tell that the 8.4-inch model actually has a higher pixel density, as both defy your ability to distinguish individual pixels. In fact, these are top contenders for best screens in the industry, and that’s really going to help when Samsung starts offering up content sources that are better-than-HD quality.

Some Netflix content is already optimized for super high-resolution TVs, so it’s logical that they could eventually make that available to other platforms too. But for photos and other types of content, it’s going to make a difference right away.

These screens are so good that with the 10.2-inch device, it starts to feel like you’re not compromising by using a tablet to watch a video over, say, a TV or home theatre setup. It’s really that good, and if you’re looking for essentially a portable movie machine, Samsung’s devices are a safe bet.

The Tab S line packs a better battery than previous devices, and gets some power savings thanks to the SuperOLED display using true blacks instead of backlit dark tones. But this is an area where these tablets still lag considerably behind iOS devices, especially when in standby. They’ll do a fairly decent job still, however, and should give you plenty of viewing time on a long haul flight, so it’s not as much of a concern as it has been in the past. They do take a long time to charge, however, so be ready for that.

The Tab S line is a solid showing by Samsung, but their real value can be summed up in one line: these are the tablets to watch movies on. They really do the best when they’re playing back any kind of media, and the rest of their features and software feels like a gloss on top of that. Truth be told, that’s likely what most tablet users are in the market for – especially those who don’t need the power and productivity of a notebook. I still find that the Android tablet ecosystem lags behind that of Apple and its iPad, but Samsung has put a lot of work in since the first Galaxy tablet devices, and it really shows.