The world has an e-waste problem. And a climate change problem. So it would be fittingly neat if e-waste, in the form of old smartphones, could be put to work combating climate change by helping to prevent illegal logging of the rainforest.

That’s exactly the plan of this Kickstarter project, which will shortly be seeking to raise $100,000 in crowdfunding to turn old Android smartphones into solar-powered listening stations that can detect the noise of chainsaws in real-time and then send an alert (via GSM) to local agencies so they can mobilize and catch loggers in the act.

The San Francisco-based startup, called Rainforest Connection, has partnered with the Zoological Society of London for the project. If it gets funded, the plan is to initially deploy devices that are capable of protecting 200 to 300 kilometres of forest in the canopy of rainforests in Africa and Brazil this year.

If it exceeds its funding goal they’d aim to spread their devices further, and also add additional features — such as the ability for mobile users to listen in on the ambient sounds of the rainforest in real time via an app. 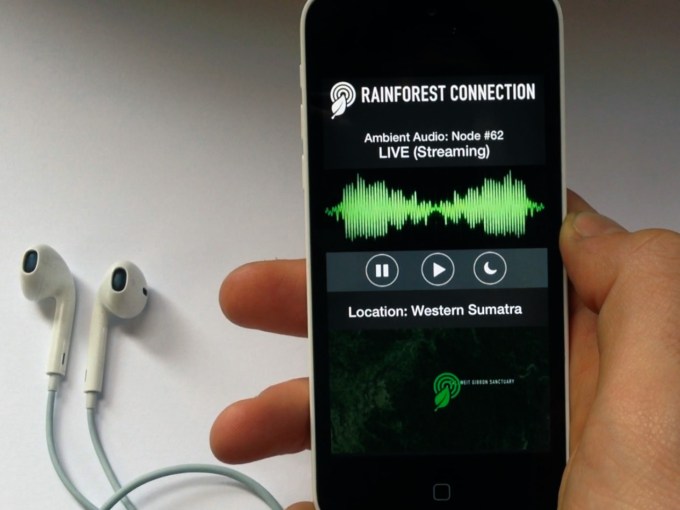 Each solar-powered anti-deforestation device — which is installed way up in the canopy so it can’t be spotted by loggers on the ground — is apparently capable of capturing all ambient sound within 1 sq. km. As well as the distinctive signature of a chainsaw, the algorithms are designed to identify gunshots and sounds of animals in distress — so the devices could also be used to combat poaching.

The startup has previously piloted the system in 2013 in Western Sumatra, and has been talking to governments and NGOs but reckons the crowdfunding route is the fastest way to get enough of its devices into the wild to make an impact.

Most Kickstarter backers won’t need to receive one of these device themselves of course, but RCFx is offering plenty of creative rewards at various price-points — including the usual t-shirt style swag or, higher up the donation chain, the ability to name a hectare of protected rainforest and access to a web portal to monitor data and sounds from your designated area. If you do want to own a device yourself that’s a $600 pledge.

On the tech side, each RFCx device consists of a recycled Android smartphone running a specially modified version of the core OS that’s been optimized for power efficiency, resource management and audio. That’s combined with an array of modified solar panels which are designed to operate under the partial shade of a forest canopy.

The devices leverage a highly sensitive microphone to first capture the ambient sounds of the surrounding area. A connected open-source software API transmits the compressed sound files to a cloud server for analysis. Within a matter of seconds, the audio data is analyzed, at which point any frequency of chainsaws, gunshots, animal distress or other deviating sound triggers an SMS alert to local enforcement officers.

RFCx argues that using audio to monitor protected rainforest areas has the advantage of offering a greater coverage area than camera traps. While satellite imagery is generally only useful for showing deforestation after the fact — rather than providing a real-time system to mobilize an anti-logging intervention in the middle of illegal activity.

Plus, even if authorities fail to act on alerts it points out that the system provides a timestamped record of logging activity which can be connected to local authority action (or inaction) against it — so it could be used to hold corrupt local authorities to account for a failure to act against deforestation, for instance.

On the connectivity front, the system uses GSM to rely alerts back to local authorities and can apparently operate with “minimal” cell coverage. RCFx claims that in its experience GSM coverage is “surprisingly prevalent” in rainforests, especially the areas that are likely to be most at threat from illegal logging. Or which are at the perimeter of where loggers are entering the forests.