Twitter’s real-time stream made it the de facto place to discuss world events. But Facebook’s VP Of Media Partnerships believes his company has two big advantages in the battle to be the digital water cooler: audience size and real identity.

It will need a lot more than that to wrestle public discussion away from Twitter, though. So Justin Osofsky tells me Facebook is pouring resources into its new Public Content Solutions team, hiring TV execs, acquiring startups that analyze real-time event chatter, and building new APIs so news outlets can visualize its data and remind us where to discuss world events.

Several of these efforts have come to fruition through new partnerships. For instance, Facebook just announced that NBC’s The Today Show will show Facebook trending topics on a giant in-studio touch screen. The show’s hosts can tap and swipe the screen to show Facebook posts of people discussing the topics.

The Discovery Channel will also use Facebook’s new Hashtag Counter API to let fans of car-racing show Street Outlaws vote for their favorite teams by posting to Facebook with the corresponding hashtag. The results will then be shown in real-time on the show. Facebook partner Spredfast is powering both integrations. 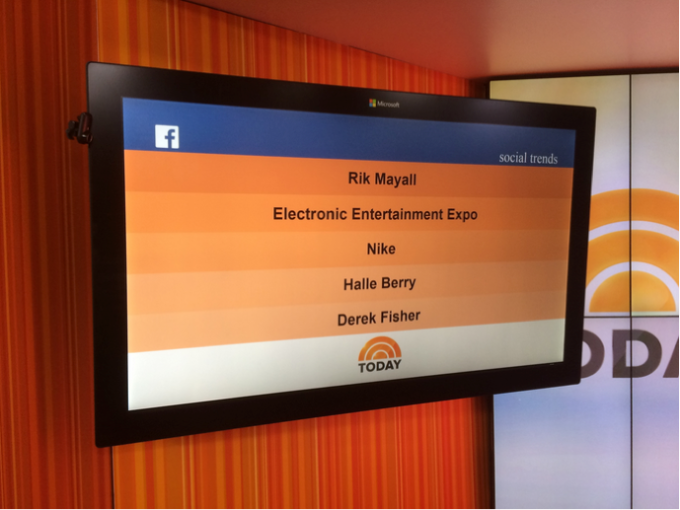 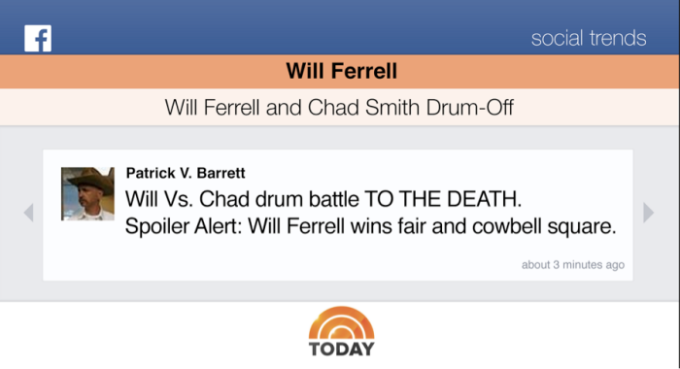 Facebook’s goal with these partnerships is to convince people that Facebook is where they should be talking about current events. This type of content connects users with shared interests and generates tons of engagement for Facebook as people come back frequently to see what friends and news outlets are saying about the day’s top happenings. Facebook can then turn that lucrative data about what people are talking about (and thereby care about) into ad targeting data, as well as time on site, into ad views.

For any of that to work, though, Facebook has to beat Twitter. Real-time feeds aren’t just a component of Twitter, they’re an integral part of its makeup, so any attempt to disrupt Twitter’s dominance of this content style is going to be an uphill fight.

That’s because Twitter’s unfiltered, real-time feed means that when I post something urgent about that last play, last scene or latest breaking news, I know it gets seen immediately while it’s still relevant. Facebook’s relevancy-filtered feed shows me the best content from the past day or so, but not the most recent. If I posted the same content there, it might make little sense when it’s seen a few hours later. That hero I was rooting for on Game Of Thrones is now dead; the team I was making fun of won the game; or new information came to light in a manhunt or political debate.

Facebook does offer a “Most Recent” option for viewing the News Feed, but it’s likely used much less than the traditional “Top News” feed because it’s relatively hard to find, especially on mobile. Facebook experimented with detecting when someone posted multiple times about real-time content and showing them in Twitter-style, reverse-chronological order. However, Facebook couldn’t find a way to make this format more engaging than its standard, less-time-sensitive model, so it never rolled it out. 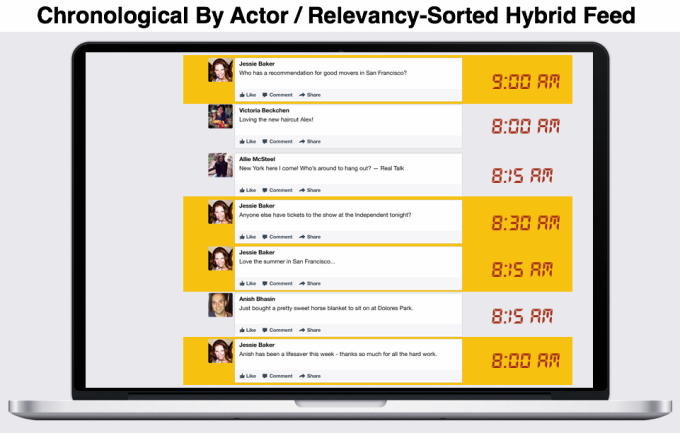 To combine real-time public sharing with relevancy-sorted updates from friends, Facebook will have to shake the perception that it’s all about private content. That won’t be easy. On Facebook, sharing to friends-only is the default, which is smart because people expect to speak freely without their posts being visible to the entire planet. But that also means users have to actively switch public sharing on or off. People come to Twitter specifically to share publicly. That’s the default expectation, and the way the vast majority of users tweet. So even if Facebook gets people chatting about events, they aren’t necessarily doing it publicly.

But Facebook isn’t giving up on trying to own a piece of the web’s real-time action. Osofsky, who is also Facebook’s VP of Global Operations, laid out four big initiatives Facebook is using to build out its public content strategy:

These are all steps in the right direction if Facebook wants a fresher feel. Still, the unfiltered feed gives Twitter a big advantage in sharing real-time content.

Though it declined to comment, Twitter has been making moves of its own to lure in real-time event chatter. Facebook has essentially been running Twitter’s playbook a few years late, from hashtags and trending topics to courting TV broadcasters. Twitter is aggressively hiring for its media partnerships team, which just added People.com’s editor-in-chief Janice Morris yesterday. It recently partnered with Dataminr to build tools that surface potential news stories to journalists. Twitter has also been experimenting with exceptions to its chronological stream that will surface replies and other activity in your feed. And at its core, Twitter specializes in hosting real-time content. This isn’t some side business for it. 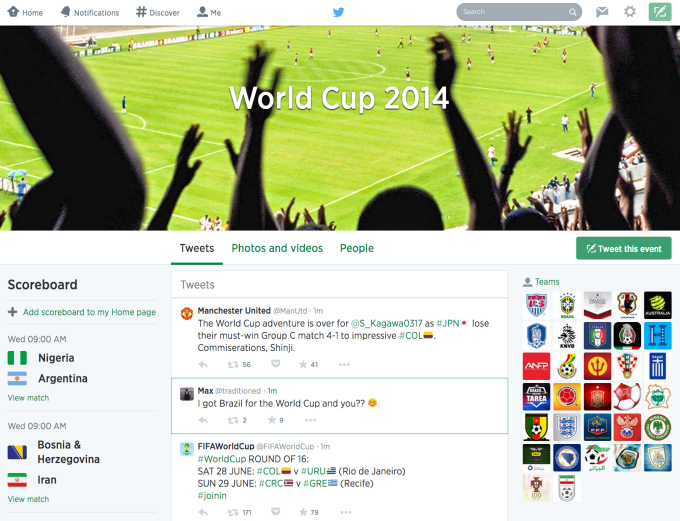 But Osofsky tells me that Facebook offers a differentiated experience for two important reasons.

The first is the sheer size of Facebook’s reach. It now has 1.28 billion users, including over 1 billion on mobile, plus another 200 million on Instagram. Osofsky says “There’s a scale of conversation, especially around public events. We have 141 million people talking about world Cup in week 1,” and those users created 459 million posts, comments, and likes. That’s compared to Twitter’s 255 million total users. Facebook hopes more users mean livelier conversations, but also that public figures will want to share on it because it could net them a bigger fan base.

Facebook is based on real identity so everyone on Facebook is their authentic self. It offers a really realistic lens in to the world around you. If you search for the World Cup on Facebook. you’ll see public posts from athletes and celebrities and important personalities around the sport, but also a very personal perspective from your friends. You’re seeing Wayne Rooney [of the defeated English team] exclusively posting his disappointment about the loss, but also post from the friends you grew up with. These elements make the experience on Facebook really unique.

You might be able to get up-to-the-second thoughts from your interest graph on Twitter, but Facebook hopes its enormous network and the reactions of your social graph are worth waiting for. 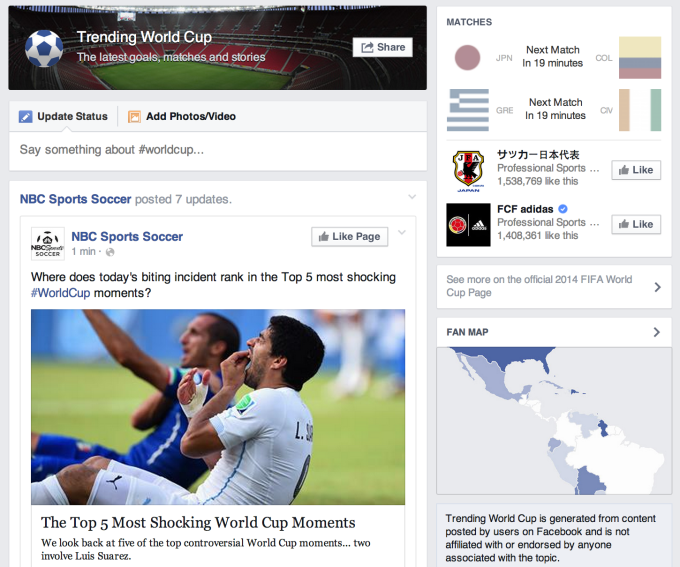 Osofsky did concede that the real-time conversation Twitter excels at is valuable. “For some types of events, such as the World Cup, the real-time lens is really important. Like seeing the reactions in real-time as people went from euphoria to disappointment [as USA squandered a win by letting Portugal tie Sunday’s game at the last minute].”

He agrees Facebook needs a better way to capture this content. “Our job is to build the best surfaces so people can have both kinds of experiences,” Osofsky concludes.

Facebook is doing everything it can with media partnerships to work around its private content focus and filtered feed. But don’t be surprised if it finds a way to detect when friends are talking about real-time events and make their voices heard immediately — just like Twitter.