Mobile messaging startup Spotbros, backed by ex-Nokia President and CEO Olli Pekka Kallasvuo, has sometimes been described as the Spanish WhatsApp. However, with that ship seemingly sailed (for now), the Madrid-based company is pivoting away from the consumer space with a new enterprise-focused messaging platform.

IMbox.me has been designed to help company employees wean themselves off using the likes of WhatsApp for work-related purposes, with features such as integrated cloud-storage, increased security, and a central company control panel, and goes up against a plethora of other startups in the enterprise messaging space.

These include well-funded upstarts such as Cotap, a messaging startup co-founded by two ex-Yammer executives, TigerText, and Fleep, founded and funded by ex-Skype employees. There’s also the likes of Microsoft-owned Yammer, Convo, Slack, and HipChat, all of which broadly play in the same space.

In other words, enterprise messaging — and specifically, mobile — is as crowded as ever. However, Spotbros co-founder and CEO, Fernando Calvo, tells me that unlike WhatsApp and consumer mobile messaging, in the enterprise space everything is still to play for. “We really believe that this is a new market with no market leader and we really believe that in two years time, the leaders of this market will be different from the leaders of the public IM market,” he says.

Built off the back of technology developed for the Spotbros consumer messaging app, which combines messaging and file sharing, IMbox.me came to life in February after the startup fielded requests from large companies in Spain wanting to use the app, or something similar, for company communication. Specifically, with employees already using WhatsApp in the workplace, enterprises require an alternative solution and one that is ‘fit-for-purpose’.

“We want to solve company problems regarding security and control,” says Calvo. “Now, with the explosion of WhatsApp and the lack of professional IM tools, employees started using WhatsApp to communicate at work and, in many sectors, this has started to become a nightmare for IT departments. They have a new and un-official communication channel, not encrypted and out of their control.”

IMbox.me has mobile and tablet apps for iOS and Android, as well as desktop Mac and Windows versions. The latter is noteworthy since, as Calvo points out, many workers still spend 8 hours or more stuck at their desk in front of a computer, yet some solutions require them to message on mobile.

(I recently heard from a founder of a mobile sales app, which has since pivoted, who argued the whole mobile enterprise app space is a fad. People sat at their desks is still where the real work gets done.)

In terms of features offered by IMbox.me, it’s the standard Instant Messaging affair, along with the ability to set up ad hoc groups, share files (each user gets their own cloud storage, as do groups), search messages, and hold threaded conversations around specific content.

“Clients keep telling us that group messaging is a mess,” says Calvo. “We have created a special type of messages (SBmails) where users can attach in one single message all the text, docs, images, etc. they want. The good thing is that these messages are not answered in the main screen but inside their own message, so the main chat screen stays clean and conversations are organised around topics.” 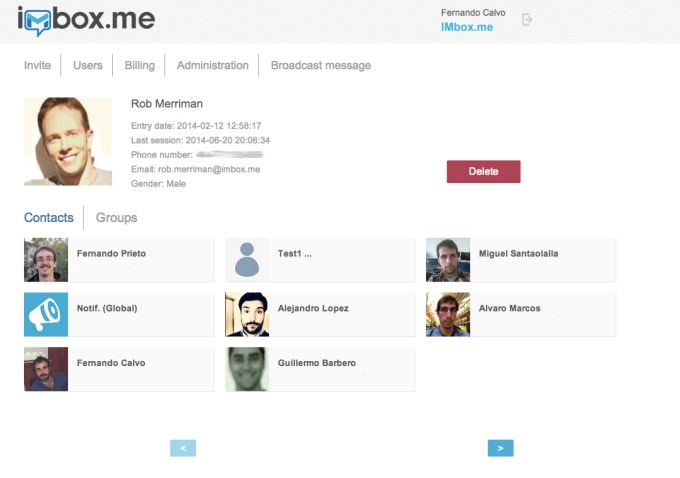 But it’s IMbox.me’s company-wide control panel that Calvo thinks gives it the enterprise upper hand. “In IMbox, we offer companies a strong encryption algorithm and a web control panel from where they can manage and control their private network,” he says.

From the IMbox control panel, companies can invite employees to join their network. They can add them manually or upload a .csv file if they have a long list of employees to invite. There’s also the ability to lock a network to be employees-only or to enable external stakeholders — customers, partners etc. — to be invited to join from outside IMbox networks.

The administrator can use the control panel to see which employees have joined the network, who has invited who, and any groups that have been formed. Lastly, there’s the ability to ‘broadcast’ a message to all members of the network, which is a quick and easy way to circulate company-wide memos or instructions.

For Premium customers, IMbox.me offers an API so they can automate processes through Instant Messaging. “As an example, one of our clients is saving thousand of euros per month as they have substituted an SMS alert system they had with an API based alert system in IMbox. Their employees subscribe within IMbox and receive alerts through our app,” says Calvo.