The 3.5mm headphone jack has a thriving double life supporting hardware extensions for the bog standard slab smartphone these days. More complex additions extend the capabilities of the phone by adding new sensors into the mix (like, for example, the Thermodo thermometer).

But here’s a maker aiming to add a really simple feature to your phone via the 3.5mm jack’s back door: a universal metal eyelet called Pluggy Lock.

Yep, it’s just a metal anchor point — for any device with a 3.5mm headphone jack — but that machined loop means you can secure your phone/slate to your person, with a clip and lanyard/chain, so it’s less likely to slip out of your fingers or work its way put of your pocket and end up smashed on the ground — or, indeed, be stolen.

It may well be that Pluggy is a sign we’ve reached ‘peak smartphone headphone jack extensibility’. Especially as it’s makers are pairing it with a range of coloured ‘fashion lanyards’ — which is an oxymoron if ever I heard one. Do people really want to wear their phones around their neck? 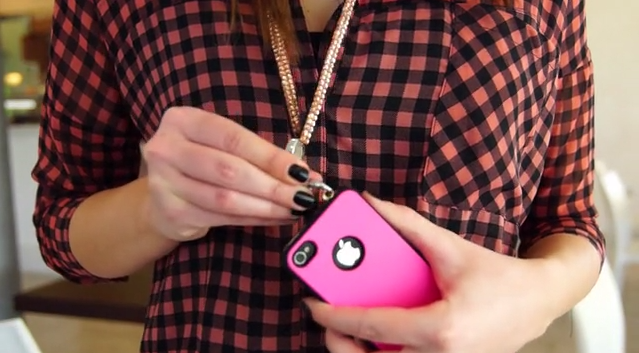 Pluggy’s maker’s haven’t stopped at fashion lanyards either. They’ve fashioned what they term a ‘selfie dock’ — aka a magnetic platform that, used in conjunction with the Pluggy, holds your phone in a position where you can easily take a hands-free selfie. Which is possibly a sign we’ve reached ‘peak selfie’ too.

How does Pluggy perform all these amazing feats? After being slotted into the headphone jack the user screws it in to expand a rubber sleeve, wedging Pluggy securely into place so you can clip whatever you fancy to its eyelet.

It’s apparently been stress tested to 3.2kg, and its makers claim repeat usage doesn’t damage the headphone jack. Albeit, obviously you’re not going to be able to use your headphones while you’ve got Pluggy in situ. But no matter, you can play with your fashion lanyard instead.

In terms of design, Pluggy looks to have taken inspiration from the likes of Pressy: another add-on that uses the headphone jack to augment a mobile device — in that case by adding an additional hardware button.

Like Pressy, Pluggy comes with a magnetic keyring clip housing where it can be slotted for safekeeping when not in use. Unlike Pressy, Pluggy has not managed to rake in serious Kickstarter cash. But it has 5x-ed its original modest funding goal of $10,000 — so has the funds to ship to its 2,000+ backers. Its estimated shipping schedule for the circa $16 Pluggy Lock is this September.

One other key thing to note here is that Apple has been rumoured to be considering abandoning the 3.5mm headphone jack — which has become a hard-won standard on mobile devices — in favour of a proprietary Lightning port lock-in instead.

If that’s the case, future Pluggys would be ejected from the iOS garden (though not from the rest of the mobile device world, of course) — unless their makers redirected their energy towards building extensions that work with the Lightning port.

In the meantime, iOS users hankering for hardware extensions on their iPhone or iPad can still plug and play freely. Or, indeed, Pluggy and play if you so wish.