It’s 11pm: do you know where your microbrews are? Matt and Andrew Bell know. As the creators of BrewDrop, they want to make it easy to order booze using a simple app.

The service, which just launched in Austin, Texas, allows you to send an instant order to local booze purveyors using an Uber-like interface. In fact, you can think of it as a drunken TaskRabbit or an Amazon Prime Drone for tipple.

“We got the idea at Matt’s wedding, where Andrew was sent to get a few things but came back with completely different items,” said Andrew. This resulting bumfuzzle upset the brothers enough that instead of simply sending a more responsible beer runner they thought an app would be the best solution.

The pair hopes to focus on the craft beer market, although they won’t refuse hard booze orders.

“It is expected of you to have a big knowledge of beer if you plan to work for BrewDrop and the we have experience in home brewing,” said Andrew. “We also plan to offer continuing services, such as a ‘craft beer of the week’ subscription service and local events like beer and wine trades.”

The team has raised a seed fund of $50,000 and they’re looking at $100,000 total in an upcoming angel round. The app is complete and in the app store now. Matt was a marketing manager at Shutterstock and Andrew worked at Pursuit-Solutions in New Jersey. The duo now lives in Austin. They pair with local liquor stores and the app will notify you when the store is open and whether or not they’re accepting delivery orders. Delivery is free but there’s a $20 restocking fee if someone 21 or older isn’t home to pick up the rotgut. 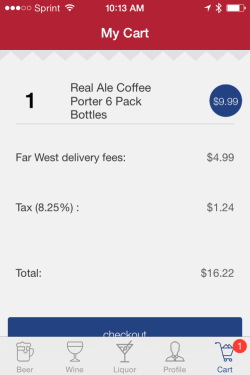 The bad part? It’s only available in a few ZIP codes right now so if you’re outside of Austin you’re SOL. That said, you can always hit the Bodega until BrewDrop goes live in your area or use similar offerings from Drizly or Saucey. Whoever you trust with your order, rest assured that your precious alcohol will arrive in a courier’s capable hands faster than you can say “Hey, guys, let’s get naked and play Cards Against Humanity!”