Facebook released Slingshot, its second attempt at an impermanent sharing app, last Tuesday. The app borrows heavily, in concept and features, from Snapchat, as well as smaller startups like Frontback and Look.

Slingshot and Facebook Messenger feature the same photo and video recording interface–a very user friendly mechanism where you tap the main button to take a picture, and hold that button to record a video.

There’s just one problem: Facebook may be violating Snapchat’s patent, “Single mode visual media capture” that was approved over a year ago.

Representatives from both Facebook and Snapchat declined to comment for this story, but the patent appears to describe the way both companies’ apps record media: 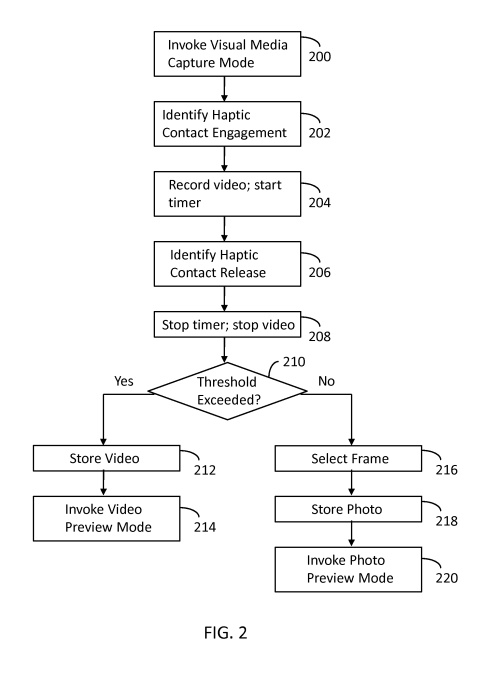 To some extent, this copying is commonplace in a playing field where ideas and features overlap significantly.

But Snapchat isn’t the only startup involved with a patent claim. Look debuted the idea of a messaging app in which people have to send back content to view friends’ messages at the TechCrunch Los Angeles Pitch-Off, which it won.

Look’s website has a “patent pending” sticker near the top; while Look CEO Megel Brown wouldn’t comment directly on whether Facebook violates Look’s patent application, he did note, “We never imagined Facebook would use our messaging mechanic to compete with Snapchat. Neither company has reached out to us.  However, we have been in contact with a major Silicon Valley player about our app after Facebook initially released and pulled their app from the App Store.”

A second Snapchat patent may show how each company thinks about this space–and why I believe Snapchat will continue to beat Facebook. 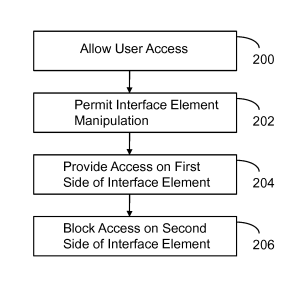 The patent, “Apparatus and method for single action control of social network profile access,” describes the way users view content in Snapchat Stories. Particularly, when you view another user’s story, Snapchat only shows you content you haven’t seen yet:

The most interesting aspect of the patent? It was filed on November 8, 2012. So, when Facebook launched its first Snapchat clone, Poke, on December 22, 2012, Snapchat was already thinking far ahead.

Poke launched with better design and more features, but failed to gain traction. 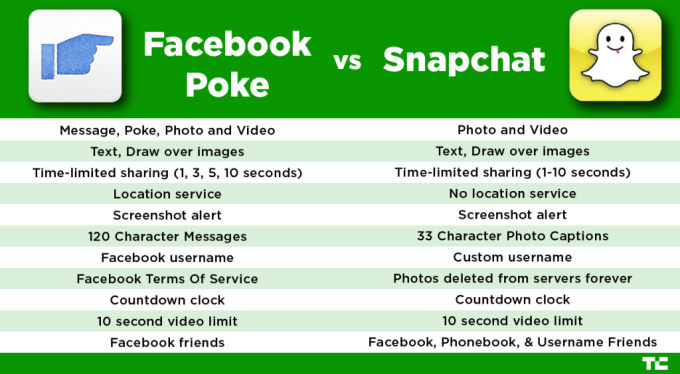 While Poke struggled to gain any traction (and was eventually pulled from the app store), Snapchat pushed on, launching Stories in October 2013. Now, less than a year after its debut, Stories are viewed more per day than direct Snaps; Snapchat says one billion Stories are viewed per day, up from 500 million per day just a couple of months ago.

In creating Stories, Snapchat created two complementary content silos: messaging and Stories. By having both direct, private one-to-one sharing, and public but not permanent sharing, Snapchat has captured users’ attention and an enormous amount of content. The dual silos also make it much harder for companies like Apple and Facebook to simply bake in an ephemeral element to their messaging apps to defeat Snapchat.

After failing with Poke and failing to acquire Snapchat, Facebook is now trying with Slingshot. Some aspects of Slingshot are great–Facebook is finally trying to put its own spin on an ephemeral experience rather than just copying another app. But the forced reply is simply awful. The content on Slingshot is boring, and I think a lot of this can be attributed to the requirement that you send someone back a picture before viewing their picture.

Video Is The Future

Once again, Facebook has launched an app aimed at the Snapchat of today, while Snapchat looks to tomorrow. On the same day that Facebook launched Slingshot, Snapchat announced a collaborative timeline called Our Story:

“When we introduced My Story we never could have imagined how powerful it would be to string those moments together into a narrative. We love watching the day unfold with our friends.

But My Story has always represented a singular, personal experience. We wanted to build something that offered a community perspective – lots of different points of view. After all, our friends often see the same things in totally different ways.

We built Our Story so that Snapchatters who are at the same event location can contribute Snaps to the same Story. If you can’t make it to an event, watching Our Story makes you feel like you’re right there!”

Snapchat only piloted Our Story at the EDC music festival in Las Vegas for this weekend, but it’s clear they have ambitions to try this out in some greater capacity. Our Story was well received on social media and by my colleague, Josh Constine.

The medium is intriguing and could grow in a number of directions; EDC’s Our Story was location based, so only people at the event could add Snaps to it. This model could do very well for everything from major events like concerts and sports events, to way smaller networks like a party.

Snapchat could also let users create “Our Story” with a small group of friends, bound by self-moderation of who can add content rather than geography. Our Story would also be very easy to monetize, as Snapchat could merely slip a few advertisements into a long stream of content; and users can tap any Snap to move on to the next one–for advertising, this could work a lot like YouTube’s skip button for ads.

One of the most undercovered strengths of Snapchat is the sheer quantity of video shared on the platform. While Instagram, Vine, and others vie for control of public video sharing, users are sharing crazy amounts of video both in messaging and on Snapchat Stories. Facebook needs a way to counter that–and I’m not at all convinced Slingshot is a successful response.

At the end of the day, it doesn’t really matter if Facebook can legally clone the features and technology of Snapchat. Snapchat’s patents may just make that harder. What the patents really show us is how far ahead Snapchat and Spiegel are so far in thinking about ephemerality.

Duds like Slingshot show why Facebook is willing to shell out billions for Snapchat. And if video continues growing on Snapchat, and Our Story can do well, that price tag will rise. Significantly.