A new report from Flurry Analytics shows that health and fitness apps are growing at a faster rate than the overall app market so far in 2014. The analytics firm looked at data from more than 6,800 apps in the category on the iPhone and iPad and found that usage (measured in sessions) is up 62% in the last six months compared to 33% growth for the entire market, an 87% faster pace.

This data comes just as Apple and Google aim to boost the ecosystem for fitness apps and wearables with HealthKit and Google Fit, both of which aim to make it easy for wearable device manufacturers to share their data and app developers to use that data to make even better apps.

We expect that the market for wearables and related apps will only expand with the release of products taking advantage of these frameworks later this year. Apple isn’t even waiting for the release of HealthKit and its Health app in iOS 8 to start marketing the many apps and devices in the category that can be used with the iPhone, with its latest ad showing off just a few of the options already on the market:

The Flurry study also took a closer look at the most avid users of health and fitness app to see if any particular demographics stood out. It turns out that middle-aged women were a significant percentage of the group who used apps in the category three times more than the average user: 62% of those who in the group were women, and those ages 25-54 were over-indexed compared to average app use: 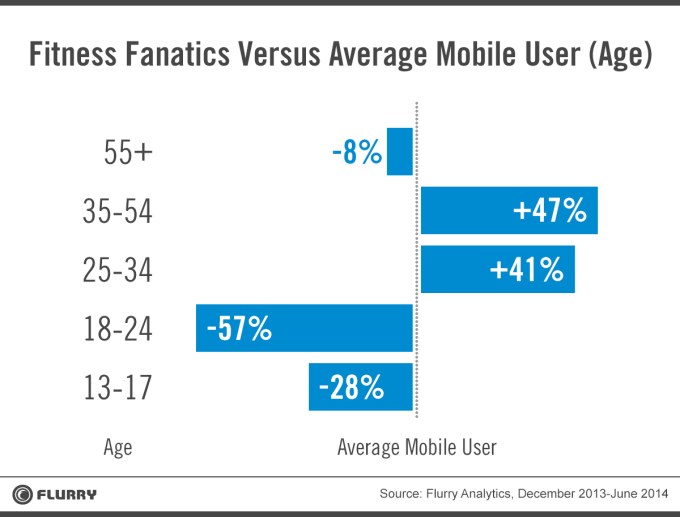