Wattpad, which lets authors share their stories with a community of readers, has attracted lots of interest from investors, having most recently raised a $46 million Series C. It’s also seeing impressive user engagement — the company says that 27 million of its 30 million users are active each month.

But founder and CEO Allen Lau noted that until recently, Wattpad hasn’t done much to monetize that activity, aside from experiments with crowdfunded self-publishing. Well, that’s changing. The company has launched its first native ad campaign and is lining up more. 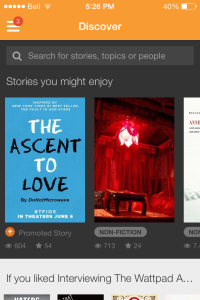 Wattpad’s first advertiser was 20th Century Fox, which was promoting its film The Fault In Our Stars. To do that, it created a Fault In Our Stars account on Wattpad, where it featured fiction from Wattpad authors that was either directly related to or at least inspired by the enormously popular young adult novel of the same name — some of those stories were actually commissioned by Fox. Then, similar to ads on Twitter and other social networks, Wattpad mixed promotions for the account and for the individual titles in with its regular recommendations. (The promoted content was labeled as such, as you can see in the screenshot to the left.)

The result? The account became the fifth-most-followed on Wattpad, with more than 200,000 followers, the ad units saw 25 million impressions (with a clickthrough rate of 2.5 percent), and the commissioned stories saw 1 million unique readers. Oh, and the movie was a hit, though I don’t think Wattpad can take full credit for that part ….

As the movie based on a best-selling novel, The Fault In Our Stars seems uniquely suited for Wattpad. But Lau said the service can be used in a similar way by other types of advertisers, as long as “the goal is telling the brand story.”

And advertising might not be the only way to make money. The company is still in “very early days in our experiments,” but Lau suggested that another possibility is releasing stories for free, then charging for bonus content. He added that the company won’t ever charge for Wattpad itself: “It will remain a free app forever.”