We are entering the age of the omnibundle, where companies “give away” services to get you to buy what actually makes them money. Take Amazon adding a music-streaming service to its $99 a year Prime club. The goal is to lure more people into Prime because its free two-day shipping encourages more impulse purchases of physical good, which is where Amazon makes the big bucks. That’s why it doesn’t have to be better than Spotify. It just has to be good enough to make Prime more tempting.

Amazon even refers to Prime Music as “the newest benefit available exclusively to Prime members,” which number somewhere around 20 million. Getting more Prime subscriptions helps Amazon by providing a consistent revenue stream, and if people forget they have it for long periods of time (like I have) and don’t order any packages, that $99 a year is a tidy profit. But even better for Amazon is if the two-day free shipping gets people ordering things they’d buy at the grocery store, Wal-Mart or Best Buy.

Over the next few years, we’ll see a big battle play out between standalone subscription services and omnibundles. How many people will pay for separate top-notch music, video, e-book and gaming subscriptions, which can run $5 to $15 a month? And how many will prefer a cheaper omnibundle like the $99 a year Amazon Prime that offers decent versions of each of these?

Cable TV, phone, and Internet providers have been hawking bundles for years, but these were more about getting three services you’d pay for combined at a lower price and then locking you in due to high switching costs. These new bundles are about monetizing one thing while giving away others. 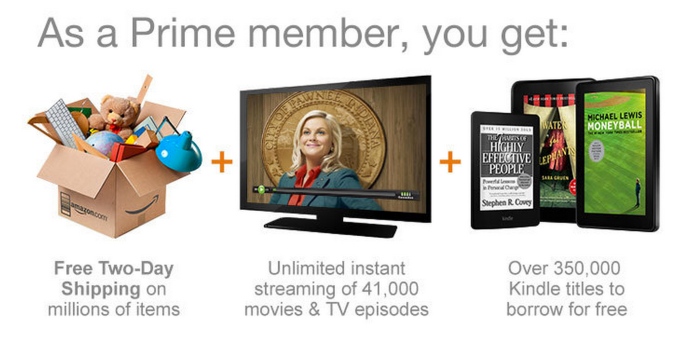 Amazon’s omnibundle now includes the 2-day free shipping it was built on. That drives its monetization, as do Prime Music; Prime Instant Video with 40,000 movies and TV shows; the Kindle Lending Library, which lets Kindle device owners “borrow” one e-book a month; and Kindle First, which offers early access to editor’s-pick books. 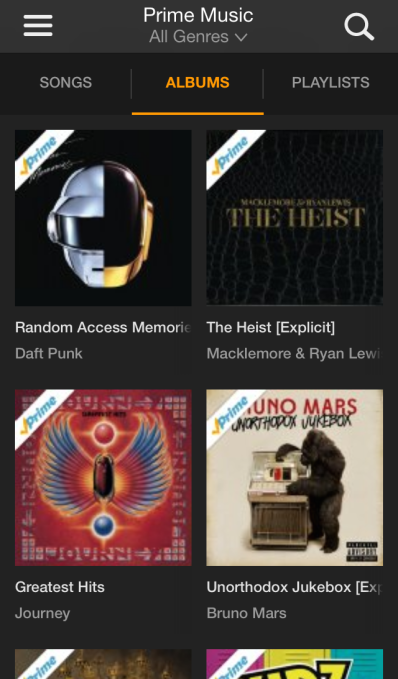 Prime Instant Video doesn’t offer nearly as much video content or exclusives, such as House Of Cards, like Netflix does, but it may be good enough for casual film and TV buffs looking for something to watch after work. And the cheapest standard definition Netflix streaming plan costs just a few dollars less per year than Prime as a whole. Prime Music hosts only 5 percent of the music Spotify does and lacks a radio feature, as well as tons of big artists, but it may be good enough for casual listeners looking for older albums or playlists to rock to while at the office or gym. And Spotify’s full mobile access plan costs $20 more per year than all of Prime.

The situation isn’t zero sum. I’m a big enough music lover to keep my Spotify subscription even now that I have access to music through Prime. But with each bonus Amazon packs in, Prime becomes more seductive to a wider set of people.

Music: Its Own Product Or Just A Piece?

Compared to 15 years ago when monetizing recorded music meant selling albums in brick-and-mortar stores, bundles have had a massive impact. The music landscape gets even more interesting when you look at what each provider is really trying to sell:

While Amazon Prime Music might seem far inferior to some of its competitors, it’s likely to get better fast. Prime Instant Video started with a tiny collection, but it quickly expanded to become a more viable Netflix alternative. Signing a deal with the world’s biggest record label, Universal, to get its music onboard would shore up huge holes in the catalogue. An easier interface that puts a play button on songs for immediate streaming without having to add them to a collection first would make Prime Music less clunky.

In the end, though, how many songs streamed or time spent on Prime Music won’t be the measure of its success. What matters is if they make subscriptions seem more attractive, because e-commerce revenue is Amazon’s true prime directive.