Payments startup Balanced is looking for ways in which its marketplace customers can more quickly exchange funds between those who are purchasing goods or services on their platforms to those who provide them. The latest option to be added is a feature that will enable marketplaces to instantly place money into users’ checking accounts by pushing payment to their debit cards.

More than just a payments processor, Balanced is focused on helping clients with two-sided marketplace businesses that bring money in from users and pay money out to service providers or goods sellers.

Thanks to the growing number of sharing-economy businesses out there — which connect people who have unused goods or time on their hands with those who are looking to make some extra money from unused assets or skills — it’s been a pretty good business.

“Marketplaces as a category are growing faster than any other e-commerce companies,” said co-founder and CEO Matin Tamizi. That’s because, he says, “marketplaces enable forms of commerce that didn’t exist before.”

Anyway, Balanced thinks it can make those services better, and that starts with making payments happen a lot more quickly.

It can now do that with its new “Push to Card” feature. The new payment option takes advantage of the huge number of users with debit cards. According to Balanced, there have been more than 200 million debit cards issued in the U.S. from more than 7,000 financial institutions.

Balanced marketplace customers can now make payments to any debit card, a process that usually takes a day or two to process. But the company has been working with a number of financial institutions and ATM exchanges to enable instant payments to a user’s bank account.

All an end user has to do is enter their debit card number, and the platform can instantly validate the payment option and, in many cases, initiate a transaction in real time. 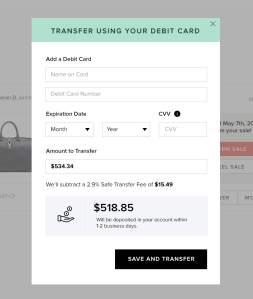 The instant-pay option now covers more than 4,500 banks, including TD Bank, PNC Bank, Capital One, Fifth Third, RBS Citizens, and Comerica. Altogether, it will be able to instantly pay to about half of all debit cards today. But it expects to increase that coverage to about 70 percent in the coming weeks as it adds more financial institutions to the fold.

Earlier this year, Balanced launched a crowdfunding campaign to determine whether it should build the option, and very quickly raised the money to determine that it was a feature customers wanted.

Push To Card is already being used by a number of marketplaces to speed up payments to users, including clothing swap startup Tradesy, service professional ERP app Pocketsuite, payment-splitting platform PayByGroup, and sports merchandise marketplace Rally.

Balanced charges 25 cents for each transaction that happens via Push to Card, a price that Tamizi says is pretty close to its costs. But the big idea is to pay people back more quickly, which it believes will help increase volume on the marketplaces that use the feature.

“Doing Push to Card is not about creating revenue, but creating more volume,” Tamizi said. “The faster people get paid, the more likely they are to sell, and that increases the size of the market.”

Since being founded in 2010, Balanced has raised a total of $3.4 million from investors such as Andreessen Horowitz, CollabFund, SV Angel, Airbnb CEO Brian Chesky, celebrity investor Ashton Kutcher, and Reddit CEO Yishan Wong, among others.