Apple’s adoption of a new credit-card scanning feature in iOS 8’s Safari browser is good news for Jumio, the company believes. Jumio, along with Card.io (acquired by PayPal) helped pioneer a similar computer vision technology for use on the web, in native mobile apps, and, as of today, on the mobile web. Apple will bring increased visibility to the space, execs say – mirroring the comments that any startup makes when Apple steps in to compete with their own version of a company’s technology.

The Andreessen Horowitz-backed company has been developing card-scanning technologies for several years now. They have two main product lines: NetVerify, which is able to validate a user’s identity by scanning their ID (a related technology called FastFill can input this information into a form), and NetSwipe, which also auto-fills in forms asking for credit card information just by holding up your credit or debit card up to your computer’s webcam, or, as is more likely, your smartphone’s camera. 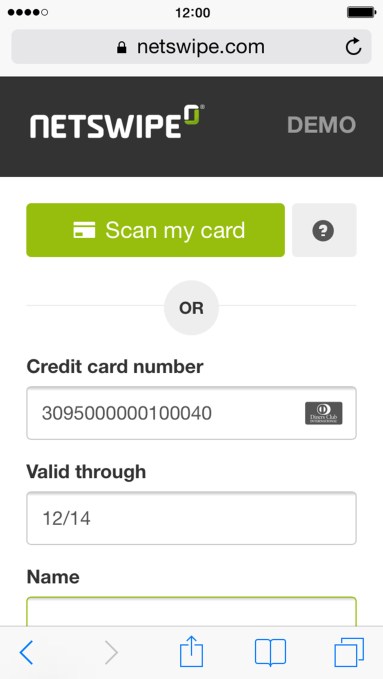 The company today has hundreds of paying customers who pay on a monthly basis for access to the NetSwipe technology, where prices range from $1,000 per month up to custom deals in the six-figures. Customers include Groupon, Priceline, SideCar, Fab, Travelocity, Gyft, and others.

Today, those customers and new ones will be able to take advantage of the Jumio NetSwipe service on a new front: mobile web. This will make sense especially for e-commerce sites, and other business storefronts where the company might not have or need a native mobile app, but still wants to make the checkout process easier for customers.

Asked how what Jumio has built for mobile web differs from what Apple is introducing in iOS 8, CMO Marc Barach could tick off a number of advantages.

For starters, NetSwipe for mobile web isn’t tied to one operating system or browser, but works cross-platform. It’s also a broader product offering, he says, as it reads more than just the card number, which is how Apple’s implementation works today. (Jumio’s reads the card number, name and expiration date). 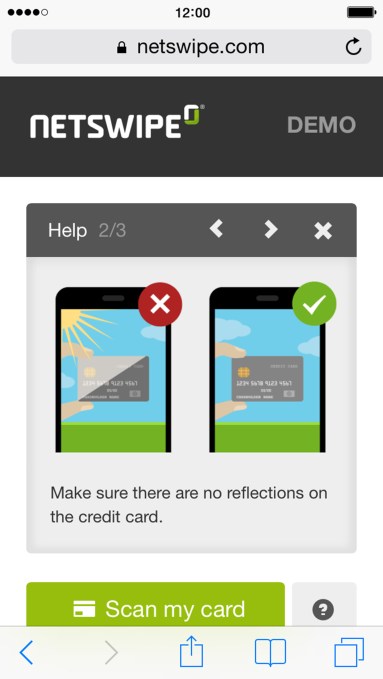 And for merchants, Jumio’s technology allows them to customize the experience.

“We’ve developed a full business offering for merchants,” he explains. “We’ve learned is that the payment page is the most important part of their process, and something they like to control, both in terms of look-and-feel and overall experience.”

In addition, Barach adds, merchants using Jumio have access to an online dashboard where they can view analytics about their transactions, including things like the number of scan events, average ticket sizes, completion rates, and more. The data is also useful when there are chargeback complaints, too, Barach points out.

In other words, Jumio is selling a service to merchants who want more than just a form-filling trick. But let’s be clear – automatic form-filling is the big draw here. When implemented, merchants see, on average, 20%-30% increases in conversion rates, the company has found. And if they’re able to achieve that simply because a lot of their customers upgrade to iOS 8, Jumio may have a tougher sell.