A handy iPhone application called Eventblimp is launching today on the iTunes App Store to help you better discover all the different types of local events and activities happening around you. To do so, the app is aggregating from a number of popular event finders and social services, including Facebook, Eventbrite, SeatGeek, Bandsintown, Eventful, and Meetup in order to serve as something of a one-stop shop for local events, big and small.

With the Facebook integration, you can see what events your friends are attending or interested in attending, which is presented in a separate section of the app. Meanwhile, the app’s main interface pulls in the events from all the other services it currently tracks, and in both cases, these are available both as a map view or in an easily scrollable list format.

Explains founder and CEO Chris Good, the company’s goal is to aggregate “the world’s event data,” and they’ve already indexed 20 million events over the course of the past few months, he says. By the end of the year, he wouldn’t be surprised to see 100 million events in the Eventblimp index. 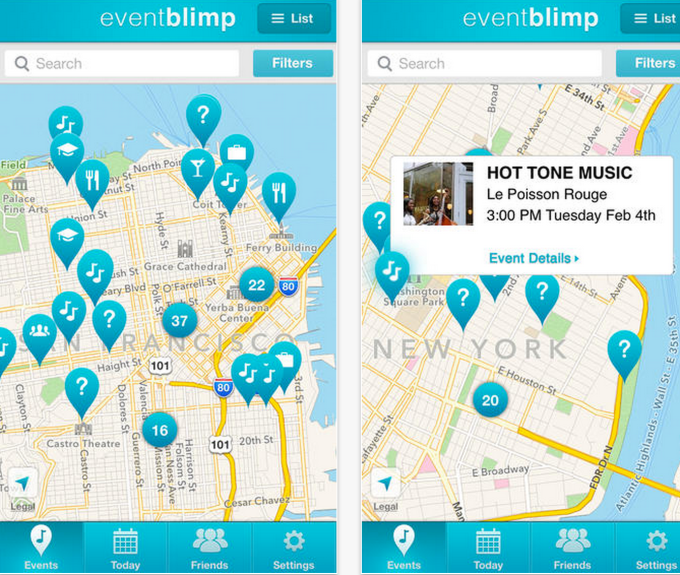 Until a few weeks ago, Good was working for private equity firm Grey Mountain Partners (which has also put up a small amount of funding to help get the app off the ground), while building Eventblimp on the side. He says he came up with the idea while hanging out with friends in New York, saying to them how he wished there was an easy way to just see everything that was going on nearby, without having to launch multiple apps.

“There wasn’t really one source, like Kayak does for airfare – there’s no clear frontrunner,” he says of the crowded events space. There are some interesting event services though, like YPlan with its curated event lists, for example, Good notes, but their footprints are limited to only a handful of cities. “We want all the data. All of it,” he adds.

Aggregating the world’s events is just the first step, however. Eventually, the goal is to introduce a level of intelligence that can help surface the best events in the area based on the ones users are, for example, saying they’re interested in, clicking through to, or registering for — like YPlan’s recommendations, but automated at a worldwide scale.

The company wants to improve its filtering selections, too, which today let you narrow the events list by various categories, including “concerts,” “nightlife,” “organizations,” “professional and networking” and more. Right now they’re working to include a “kids” filter, which early testers have demanded. To make its filters work better, Eventblimp is planning to use natural language processing to understand where and how uncategorized events should fit in.

Further down the road, the plan is to offer “sponsored events” to event promoters in the form of different-colored pins on the map interface in order to generate revenue.

Boulder-based Eventblimp is pre-seed stage with a bit of Grey Mountain and founder money invested, totaling under $200,000.

The app is a free download here on iTunes. An Android version is now a “huge priority,” we’re told. The service is also live on the web here.