Sticker packs and emoji have become a go-to means for mobile messaging companies to generate revenue from what are otherwise free applications. Today, one such service, a former TechCrunch Disrupt battlefield finalist called Talkz, is introducing a new way to upgrade the sticker experience in a way that leverages the speech background of Talkz founder and CEO Heath Ahrens, also the founder of iSpeech and DriveSafe.ly.

Yep, you guessed it: Talkz is now doing talking stickers.

When Talkz first launched, the company was thinking of competing in the broader mobile messaging market with an app of its own, which was then focused on having users sent both text and voice messages to each other. But it wasn’t until early this year that Ahrens came up with the idea for talking stickers, he says.

To test the concept, Talkz built an online platform where users could create their own stickers by uploading pictures and their own voices. Initially, the team reached out to a handful of YouTubers known for doing impressions and invited them to the private beta. The overall idea is that sticker-building is something that a smaller percentage of the user base would do, but once created, the stickers could be used by anyone.

Once available in the app, you could type out a message as Arnold, Xerxes (from the movie “300”), President Obama or any other impersonated talking sticker. Asked if he was worried about copyright-infringement issues, Ahrens says that many of the “characters” used would fall under public domain. In other cases, he believes the sticker impersonations would be considered “parody,” and therefore be protected. (This would work for now, at least, as the stickers are not being sold.)

Talkz today has only a small user base in its own applications. But Ahrens explains that the larger vision for the company now is one that sees them licensing the talking sticker technology to other mobile messaging players. 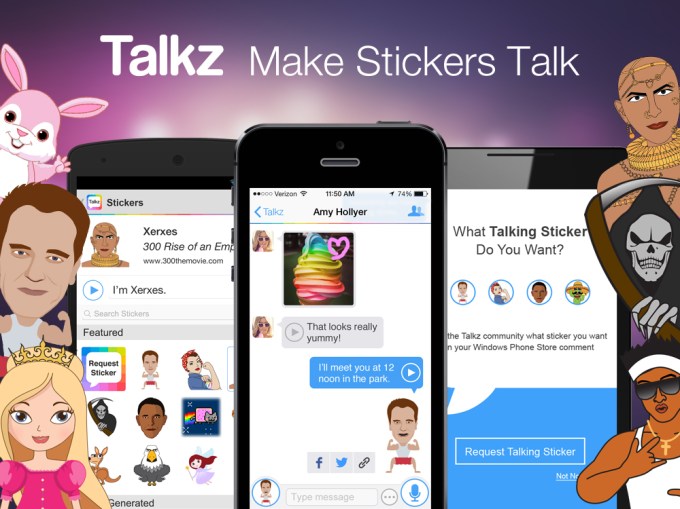 “Talkz is a showcase application,” says Ahrens. “If Talkz does really well, awesome…but, at the end of the day, all these big guys that have hundreds of millions of users – we’d love to put our talking stickers in front of them.”

The company is already in “serious” discussions with two mobile messaging providers, he adds, as well as brand aggregators who sell stickers to multiple companies.

What makes the product interesting to these companies, besides its consumer appeal perhaps, is the potential to sell “sponsored” stickers from advertisers, allowing them, for the first time in many cases, an entry into the closed world of private person-to-person communications. For example (only an example!), you could imagine that a company that had a well-known character of its own, like the Geico gecko, could create talking stickers featuring the official brand assets and voice.

This could be one avenue toward monetizing Talkz, while another could involve reselling the user-generated stickers and doing a revenue share with the creators.

Talking stickers may seem really silly, but sticker sales are turning into notable revenue streams for many messaging companies, especially in Asia. For instance, last year, The Next Web reported that $17 million of LINE’s $58 million in total revenue in Q1 2013 came from stickers. A few months later, sticker revenue climbed to $10 million per month. And by last November, Line reported that 20 percent of its Q3 revenue came from stickers versus 60 percent from games.

Meanwhile, when Path launched stickers last year, it made more revenue in 24 hours than in its entire history as a company. And Finnish app Jongla said last summer that stickers drive nearly all its revenue.

The new talking stickers are live now on all of Talkz’ applications, including iOS, Android, Windows Phone and BlackBerry.

“Um…I can’t say,” Ahrens responded. “There are a lot of messaging apps that are interested in using our talking stickers to monetize their platforms.”