Do a lot of Amazon shopping? Then you’re going to dig this: a new website called FiveStar helps you uncover the best products on Amazon in any category and organized by budget. So for example, you can find the best coffee makers that are $10 and up, then see the best that are $20 and up, then $30, $40, $50, and so on.

To determine what constitutes something being the “best,” FiveStar’s creator Matt Condon explains that the site uses a simple weighting algorithm that first looks at relevance, followed by popularity, star rating, then finally price.

Launched only a few days ago, the site has already generated a little buzz on tech industry hangouts like Hacker News and Product Hunt, for example.

Condon, a rising sophomore at Louisiana Tech University, is studying electrical engineering and physics, and is currently based in New York to participate in HackNY’s summer program and to intern at ad technology company Magnetic. He says he came up with the idea for FiveStar to solve a personal annoyance.

“I was spending up to 30 minutes comparing items that I have no personal experience with,” he tells TechCrunch. “The original use case was for finding the best toaster on Amazon below $20; I know nothing about what to look for in a toaster, and I just wanted the best value for my money, so I figured I could write a simple script that would find the objectively best toaster.” 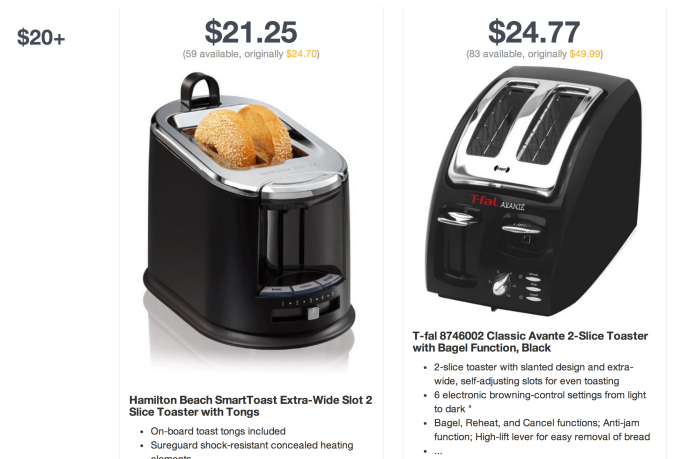 He ended up doing just that. That script later formed the basis for FiveStar, which Condon coded himself in his free time over the past school year.

The site itself is still new, and already crashed once when it started to receive serious traffic. But Condon believes he’s now been able to stabilize it for a larger load. In tests, the site responded quickly to a variety of searches across Amazon’s categories. A drop-down box next to the search bar lets you filter your search by Department, too, like “Appliances,” “Electronics,” Kitchen,” “Home & Garden,” etc.

However, in some cases, FiveStar doesn’t organize the resulting product suggestions appropriately. For example, a search for “ballet flats” in the “Shoes” department (arguably not a search you’d probably use this site for, but still…) put $75 and $79 dollar shoes in the $10+ and $20+ groupings, when they should have been in the $50+. In other words, FiveStar may still need some tweaking.

This isn’t the first time someone has hacked around with the idea of pulling the best products from Amazon into a specialized search engine. As one commenter pointed out on Hacker News, a site called Toppp.com does this, though it doesn’t organize results by budget. Another site called AmaZoom did something similar as well, but was killed off when Amazon changed its API. And of course, Amazon offers “top rated” lists of its own, too.

Since its launch, Condon says he’s used the service to help him find a great racquetball racket for beginners. Here, it was especially helpful, as he wouldn’t have even known what features to consider when making product comparisons otherwise, he notes.

FiveStar today leverages the Amazon Product Advertising API to pull information about the search query, and can support any category on the U.S. Amazon store. The plan going forward is to expand FiveStar to support other Amazon stores, as well.

UPDATE: Well, that was fun while it lasted. After publication, Amazon began throttling FiveStar’s API requests, even with the caching. Then they stopped as we went to add this update. It’s unclear what will happen next.