Hang Local creator Allen Romero is a self-proclaimed “social mother fucker” whose main goal is to get people off their phones and connect them in the real world. Ironically, he created an app for that.

It’s likely that at least half a dozen of your friends are down to grab a bite to eat or head out into the city for a fun night at the same time you are. You just don’t know it. Romero looked for a social solution to help everyone connect on the fly, but was surprised no one had created an app to do this yet.

There are quite a few apps out there that currently let you broadcast what you are up to (Twitter, Facebook, etc.), but there aren’t many that let your friends know when you’re available to hang in the near future. Foursquare’s Swarm actually does have a feature built in for this, but it’s not clear how many use that feature — or how many people even know about it; I don’t think it’s an intuitive part of the app. Though Swarm, unlike Hang Local, does offer location-sharing so you can at least know how close your friends are in proximity to you.

An ex-Google engineer, Romero says he first thought up the currently web-based-only Hang Local after spending long hours on the Google bus every day, only to get home late and find no one was around to grab a bite or hang out. “It was depressing,” he says. “I’m a pretty social guy and most nights I didn’t know who was just chilling at home but available to do something and I’d end up eating out alone and it sucked.”

Of course you can just group text people or post directly to Facebook that you’re available at the moment. But according to Allen, that doesn’t really solve anything. “Friends might know I’m available if they see my post or text and I still don’t know if they are.” He says he’d be texting a friend or two, people he was used to texting, but if they didn’t answer or already had plans, he’d end up all by himself again.

Hang Local actually lets you and your friends select when you’re available to hang and what activities you would like to do. 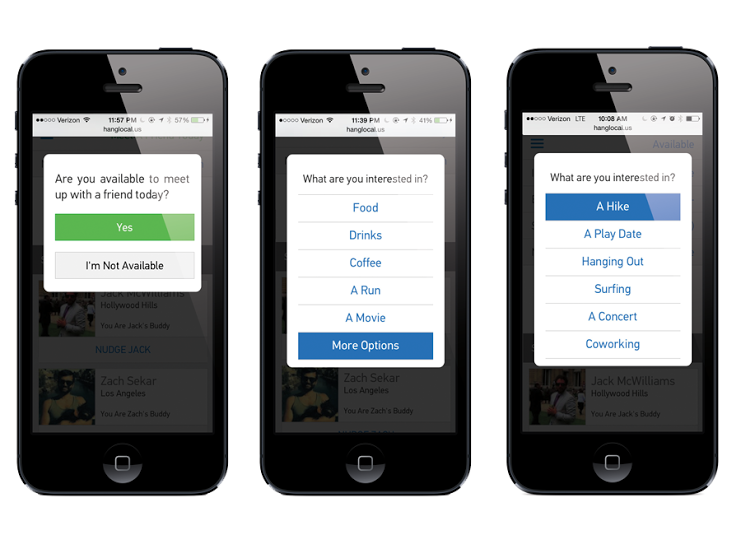 You simply use the Facebook login to connect and then it gives you a list of people you are connected to who are using the social graph. You can also search for specific friends at the top of the screen to connect to. Once selected, you can then break friends out into “buddies,” as Hang Local refers to them, or as “favorite buddies.” So if you just want to invite your very best buds to hang and not let anyone else know of your plans, you can do that. 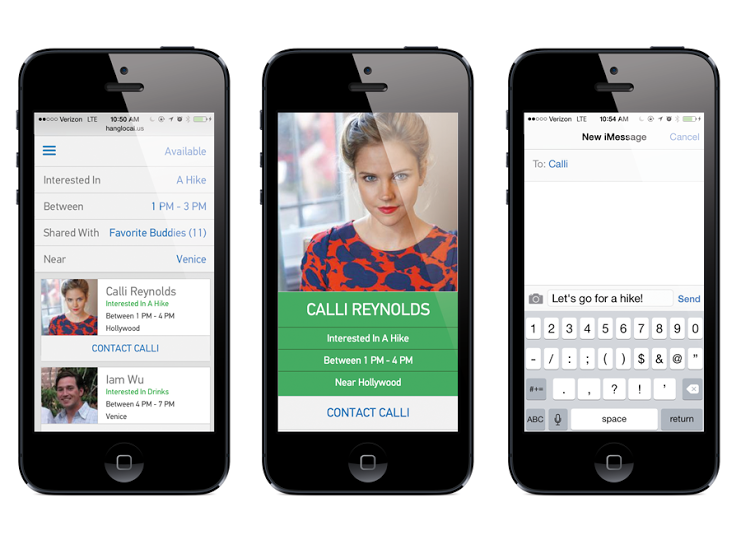 With just a couple thousand users on the app, Hang Local is still in the very early stages. And it’s still just an army of one. Romero is (also ironically) the sole programmer, founder and CEO, still hanging by himself in an effort to get everyone else to hang. But Romero is quite serious in his belief that his app has the potential to take on juggernauts like Yelp and Swarm. Though the monetization plan seems a bit murky at the moment, Romero gets a big grin and goes off on that, as well. Something about Groupon meets Yelp meets Foursquare.

He’s also confirmed a location-based feature as well as an iOS version of the app that will be coming out within the next couple of weeks.