In the middle of Apple’s big announcement, which includes a revamped iOS Photos application among dozens upon dozens of new features arriving in iOS 8, Google quietly rolled out an update to its own iOS “photos” application, also known as Google+ . The company has now released Google+ Stories for iOS, the new multimedia, scrapbooking-like feature which automatically combines your photos, videos and places you visit into a travelogue.

The feature was introduced last month, and was already available on Android with an iOS release scheduled to hit “soon.” Interesting that Google (or Apple?) decided to roll out the change during the WWDC keynote and resulting flurry of press coverage. 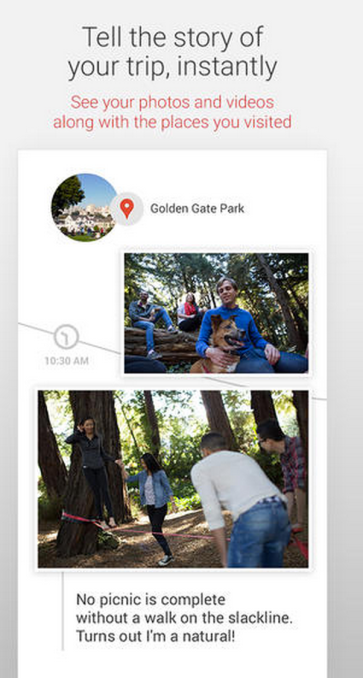 Google+ Stories works alongside Google+’s auto-upload feature, which automatically uploads the photos and videos from your iPhone’s Camera Roll to Google’s social network.

With Stories, the idea is to form some sort of narrative out of all those photos, and do so without you having to take the time to build content collections yourself. Instead, Google+ Stories will find your best shots algorithmically, then combine that with location data in order to create distinct collections of photos, video, and text.

Google will automatically remove duplicate photos, blurry ones, and other bad images so they’re not included in your Stories.

When viewed, these Stories launch multimedia experiences that take over your browser like a slideshow on steroids, with support for animations, transitions, captions and interstitials. Like your auto-uploaded photos themselves, your Stories are private by default, letting you make edits, add or remove content, and change the captions before choosing to share them. When new Stories have been created for you, you’ll be notified by a push notification.