If you need a laptop that’s also a tablet that’s also a cellphone that’s also a Windows 8.1 machine that’s also an Android device, I think we found just the laptop for you. Dubbed the Asus Transformer V (as in “Five,” not vendetta) the device dual boots into Android instantly and has a little ZenFone stuck to the back of the screen, a feature that I’m positive will confuse and delight buyers to no end. 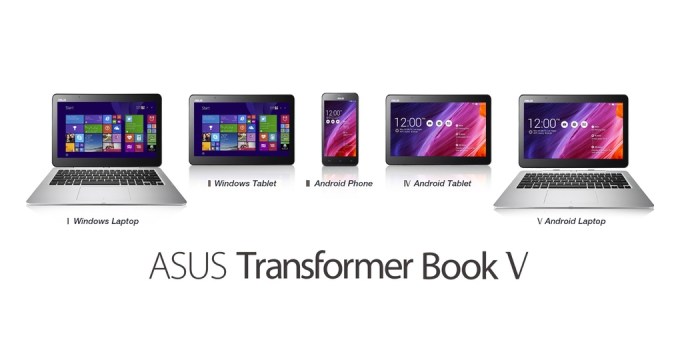 The “tablet” part runs both Windows 8.1 and Android. You can also access the parasitic ZenFone’s OS from the Windows interface and have the phone take over the tablet completely. You can also disconnect the phone and use the screen part as a Windows or Android laptop – with the keyboard – or as a Win8 or Android tablet without the keyboard. Ultimately it’s some of the weirdest hardware you can expect to see out of Computex this year, which is saying a lot.

How much does it cost? No word yet, but I doubt it will be cheap. You can read a bit more at Engadget but rest assured it will be a while before this strange chimera comes to stores.

I think the idea of a dual-boot tablet is definitely interesting – there is a compelling reason to drop out of Windows and into Android, at least for potential battery savings. But I’d really love to see what use cases Asus can offer here for users who might be on the fence about spending a bit for a tablet/phone hybrid but can’t make up their minds.