Fitness wearables are getting more specialized. There’s Sensoria’s smart running socks. The Krack trick-tracker for skateboarders. And now Smash: a wearable bracelet for tennis players to quantify their technique.

Or there will be if Smash’s Australian makers can convince Kickstarter backers to pledge a rather hefty $200,000 AUD in crowdfunding over the next 43 days.

Smash founder Rob Crowder says that level of funding is required to take the current prototype to commercial product, with system architecture, tooling design and production line set up named as the “big ticket items” on the startup’s need-to-do list.

It’s been part funded by the Victorian Government, through a Technology Development Voucher, up to now. But taking pre-orders via Kickstarter is evidently the next obvious step for developing this wearable.

The more specialized the wearable, the more limited the size of its addressable market, being as it’s focusing on only that particular sport or activity. But that tradeoff is likely to be well worth it if a business can build a highly engage community focused on usage of their particular tech.

Add to that, singular focus can of course produce a more compelling end product than chasing a generic market and trying to be all things to all users.

The ultimate aim of all these specialized sports/activity wearables is to gamify a group of enthusiasts to share their skills with other likeminded individuals and build a monetizable data mountain for the affiliated startup in the process.

In Smash’s case, major sports like tennis are hugely popular — it reckons there are some 78 million tennis players globally — so the potential market for this dedicated wearable isn’t necessarily that limited after all. (Although not every amateur ball smasher might see the value in having their failed serves and backhand flops recorded for posterity.)

Some of these dedicated wearables certainly have a decent crack at building thriving specialized social networks. (Although it the case of Krack it’s already competing with action sports tracker Trace, so the race to build out the most attractive device-plus-network for those particular sports/activities is already on.)

Where there are competing specialized efforts, the device/network that gains the most traction is likely to become the dominant wearable for each particular sport/activity, assuming its tech lives up to its claims. And other startups don’t raise the bar by offering even fancier tracking tech.

So what exactly does Smash do? It’s being designed to coach the user, offering analysis of their play, as captured via the wearable — including overviews of entire games — and recommendations for how to improve, via the companion app. 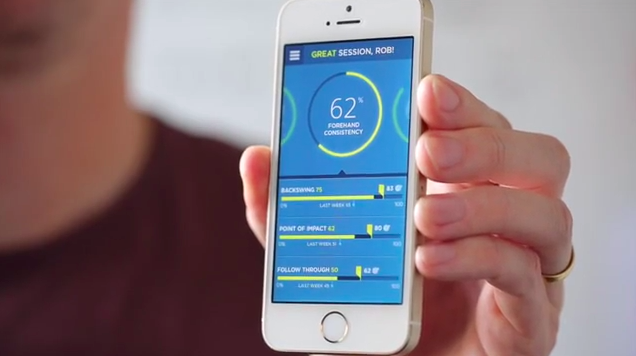 “The app offers technique insight and tips to improve, based on your ability. Players want a more consistent game, so the focus is bite sized learning and the ability to set goals. It also has a social side and tracking of achievements,” says Crowder.

He reckons there are no other dedicated tennis wearables at this point, but does concede there are “a couple of racket based products (Babolat Play and Zepp tennis)”. But Smash is evidently aiming to out-innovate its more rigidly racket-based rivals.

The Smash bracelet contains a variety of sensors — including a 9-degrees of freedom sensor array with triaxial accelerometer, gyroscope and magnetometer —  which will enable it to measure granular factors including the number and type of shots; racket head speed; racket head momentum; spin; wrist rotation; stroke trajectory; impact point consistency; and overall technique consistency.

“The specific technology is an accelerometer, gyroscope & magnetometer which take 250 measurements every second. A micro-controller and operating system analyse the data using a series of algorithms — all on board the device,” explains Crowder.

Obviously it’s not going to be able to tell whether you actually got the shot in or not though (until someone develops a smart tennis ball to go with it). Hence the focus on technique rather than match scoring.

The wearable is being developed for tennis initially but the startup is also considering other sports where the device could be applicable — as another way to expand its future addressable market.

Of course all this is moot if Smash can’t raise enough cash to get to production. At the time of writing the campaign has raised just under $15,000 AUD so it has a pretty steep mountain to hack its way out of over the next month+ if Crowder and co are going to be able to deliver on their wearable vision.

The early bird Kickstarter backer price for the Smash wearable is $129 AUD, with an estimated shipping schedule of next February.